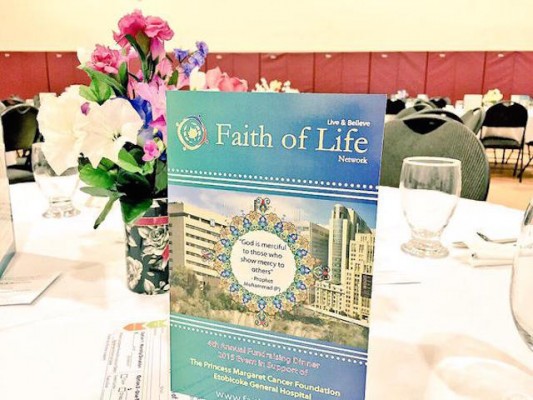 (March 1, 2015) – Hundreds of Muslims turned out at a gala dinner on Saturday, February 21st at the Sayeda Khadija Centre (SKC) in Mississauga to launch a fundraising drive in support of the Princess Margaret Cancer Foundation and Etobicoke General Hospital.

Despite the cold, wintery night and treacherous road conditions, the hall at the SKC Centre was filled with people.

“Thank you very much for being with us in this very beautiful weather,” said Dr. Hamid Slimi, Founder and President of the Faith of Life Network, in his welcoming remarks. “Last year, I brought up the idea of supporting Princess Margaret Hospital and Etobicoke General Hospital.”

The Faith of Life Network has been at the forefront of many recent fundraising drives to support hospitals in the Greater Toronto Area. It was part of a collective of Muslim organizations that raised $1 million for the Brampton Civic Hospital. The organization also had previous drives in support of hospitals in Mississauga and Toronto.

“The size of the crowd on a night that people should probably be at home speaks volumes to the Faith of Life and to your leader, Dr. Slimi, that you are here,” Ken Mayhew, President & CEO of William Osler Health System Foundation told the audience. “Anyone who has used a community hospital knows the importance of that hospital. It is only through the support of the community that we are able to do the important work that we need to do.”

“You were there to raise one million dollars for William Osler Brampton Civic Hospital – that is the largest contribution that we have ever received from a faith-based group,” added Mayhew.

The Faith of Life Network in this latest fundraising drive has pledged to raise $200K for the two hospitals.

“The majority of your health care – where you are born to where you take your child with a fever, where you go for the aches and pains of life, to where you go when you get older and sick, and where you are cared for in you final days – is your local community hospital,” noted Ken Mayhew. “Etobicoke General has one of the busiest emergency departments in the entire country.”

“Now after forty years of doing the best with surroundings that are not the best, we have a great opportunity to build a new tower and I am deeply honored that you will be part of that journey. I will do everything I can to support you and to acknowledge the tremendous work and community leadership of Faith of Life Network.”

“Cancer used to be a death sentence and the treatment more dreaded than the disease itself but we have seen the entire process of cancer care change,” explained Moretti. “We’ve seen leading researchers, scientists and experts come from all over the world to the Princess Margaret because they believe this is where the fight will be finished.”

“Our goal is to conquer cancer in our lifetime,” she added. “Princess Margaret is one of the top five research centres in the world. It is the only centre in Canada that treats only cancer, one hundred percent dedicated to understanding and fighting cancer.”

The Faith of Life Network states that its mission is to promote the positive values of Islam by building communities through shared religious observance, quality educational programs, mutual support and networking, and service to humanity.