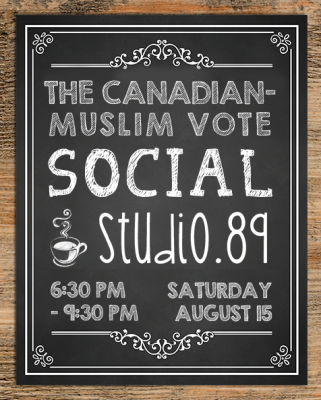 (August 12, 2015) – A summer social mixer is being held this Saturday in Mississauga to raise awareness among Muslims about the importance of voting in the upcoming federal elections set for October 19.

Organized by the Canadian-Muslim Vote group, the event will feature a speaker who will address the importance of civic engagement.

“This event will provide a forum for people to discuss issues related to the civic engagement of Muslims in Canadian politics, particularly in the context of this year’s election,” an organizer of the event told IQRA.ca.

The organization has been holding events and information sessions for the past few months.

“W(e have been doing outreach in the community, particularly in areas with high concentration of Muslims,” according to an organizer of the event. “We often set up booths at community events, such as Halal Food Fest, ISNA Convention, Thorncliffe Fun Fair and at mosques where we get permission to do so.”

“Our organization’s launch was held on Good Friday Juma, where we organized a coordinated khutba on the importance of voting at over 21 masjids across the GTA,” he added. “We also had a heavy presence in masjids during the month of Ramadan through our ‘Ramadan Ambassador program’, whereby our volunteers set up booths and made announcements at their local masjids around the GTA.”

The organization has been doing outreach in ridings where there is a large Muslim population.

“We have identified certain parts of the GTA that have a particularly high concentration of Muslims, and try to do more outreach in those areas,” noted the Canadian-Muslim Vote volunteer. “With that being said, we also do a lot of work across the GTA generally as well.”

The Canadian-Muslim Vote invites you on August 15th at 6:30 pm for the Summer Social Mixer at Studio 89 1065 Canadian Place, Mississauga.