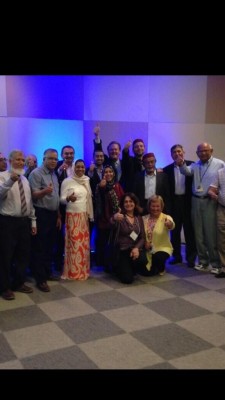 “By the Grace, Mercy, Blessings and Guidance of God Almighty we have finally reached the end of the $1 million fund-raising campaign for the Brampton Civic Hospital with the last and quickest fundraiser ($130K) on May 26,” Dr. Hamid Slimi of the Muslim Friends of Osler told IQRA. “I had the honour to surprise and announce to the hospital staff and volunteers that we did it.”

The Muslim Friends of Osler is an initiative that started from William Osler Health System Foundation’s South Asian Roundtable and members were appointed to the group to obtain support for the hospital from the Muslim community in the area.

The Muslim Friends of Osler made a $1 million pledge in 2007 to the William Osler Health Centre Foundation towards the construction of the new Brampton Civic Hospital.

“Praise be to God, and thanks to the Muslim congregations of Brampton and North Mississauga and thanks to our donors and volunteers who subscribed to this vision,” said Dr. Slimi. “Insha Allah, on June 19 we will have the $1 million cheque presentation celebration.”

Brampton Civic Hospital is part of the William Osler Health System which is one of Canada’s largest community hospital corporations serving the growing and diverse communities of Brampton, Etobicoke and surrounding areas in the Greater Toronto Area (GTA).

Osler’s hospitals include Etobicoke General, Brampton Civic and the soon-to-be redeveloped Peel Memorial which together provide a comprehensive range of acute care, ambulatory and ancillary health services. Osler’s emergency departments are among the busiest in the province and its labour and delivery program is one of the largest in the GTA.