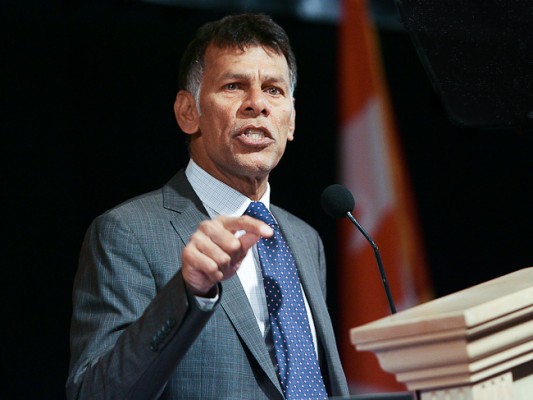 (May 25, 2014) – On May 8th, delegates to the Canadian Labour Congress convention in Montreal elected Hassan Yussuff as President in a contested election.

Yussuff defeated incumbent Ken Georgetti, who has been CLC President since 1999.

The Canadian Labour Congress represents the interests of more than three million affiliated workers in every imaginable occupation from coast to coast to coast.

The CLC is the umbrella organization for dozens of affiliated Canadian and international unions, as well as provincial federations of labour and regional labour councils.

Hassan Yussuff has come from the factory floor of automotive manufacturing plants to the highest position in the country’s labour movement.

Born in Guyana, South America, Hassan Yussuff came to Canada as a young immigrant and later found work at the CanCar plant in Toronto – a bus, trailer, railway and aircraft manufacturer where he first became active in the labour movement.

Within a year he had become plant chairperson of Local 252 of the Canadian Auto Workers, the start of a series of key CAW positions, including being elected plant chairman of the General Motors Truck Centre.

Yussuff has a long history of remarkable achievements, becoming the CLC’s first person of colour elected to an executive position in 1999 as Executive Vice-President. He was then elected to the first of his four terms as Secretary-Treasurer in 2002.

Yussuff has also been a highly active union leader in the international arena, leading to his recent election as president of the Trade Union Confederation of the Americas (TUCA) for a four-year term.

TUCA represents more than 50 million workers belonging to 50 active trade union affiliates in 29 countries, including Canada, the U.S., Brazil and nations in Latin America. TUCA belongs, in turn, to the International Trade Union Confederation (ITUC), with headquarters in Brussels.

Yussuff started his international activism by visiting South Africa in 1991 as part of a CLC delegation. He was then chosen as an observer to the first democratic South African elections in 1994 that saw Nelson Mandela become President of the formerly racially segregated nation.

In 1999, Hassan Yussuff led a fact-finding delegation to East Timor whose work contributed to that country’s eventual independence from Indonesia. He was also an executive member of the United Nations’ North American Coordinating Committee on the Question of Palestine.

Yussuff complements his labour roles with deep community involvement, including being active with the United Way, where he has served on the National Board of Directors, and with the National Institute of Disability Management.