[This is the fifth part in the series covering the history of the Islamic Foundation of Toronto, the first purpose built Islamic Centre to be established in Toronto. Many of the men, women and young people involved in the Islamic Foundation would become leaders and community activists in the North American Muslim community well beyond the confines of this mosque – a testimony to the dynamism of the Foundation in the early decades].

Up to this point in its history, the Islamic Foundation of Toronto had distinguished itself for being an open, welcoming organization that was built by families who were interested in living Islam and carving out a Canadian Muslim identity.

The diversity in the congregation was a source of strength and looked upon by members as an opportunity for growth – much of this growth in understanding and appreciation for each other was achieved through learning and social interaction at the mosque but also through family study circles that were held monthly and hosted by members on a rotation basis.

By the mid-1980s, a vibrant series of activities had developed across the city, including at the Islamic Foundation.

Women, men and youth study groups, and weekend camps were being held at the city’s mosques – the Islamic Foundation, Jami Mosque and Croatian Islamic Centre – as well as on university campuses and, through these activities, stronger community bonds were being built in the mosques and across organizations.

By 1985, the Islamic Foundation of Toronto was at a pivotal stage in its development – funds needed to be raised to build the new Islamic Centre and the same sense of community that was among the membership at the Rhodes Avenue mosque needed to be developed among the rapidly growing Muslim community that became affiliated with the organization as a result of the new project.

This would prove to be an ongoing challenge for the organization as the new Centre took shape.

Scarborough had one of the largest concentrations of Muslims in the city and many Muslims families were re-locating there in anticipation of the first purpose built Islamic Centre.

To help integrate the new members the organization increased its programs at the mosque in East York and started organizing regular educational programs and social gatherings at local public schools close to the site of the new Islamic Centre.

Another defining feature of the organization in this period was that the leadership looked beyond the congregation and worked to develop relationships with the major mosques in the city, as well as with the continental Muslim community.

The Islamic Foundation would develop strong relations with the Jami Mosque (an Islamic Society of North America (ISNA) operated mosque), and the two organizations would hold joint Eid prayers at the CNE grounds, as well as picnics, Eid dinners, and educational programs. An-Nur magazine that was published monthly by the Jami Mosque and edited by Dr. Abdullah Hakim Quick became s a joint publication with the Islamic Foundation.

This relationship would be further strengthened when the Islamic Foundation became a member of the Canadian Islamic Trust Foundation (CITF), an affiliate of the Islamic Society of North America (ISNA).

In early 1986, a ISNA Shura Council of Metro Toronto was formed that brought together the Islamic Foundation of Toronto, Jami Mosque, Muslim Student Associations on university campuses, and women and youth groups into an umbrella coordinating council.

In 1986, Imam Dr. Iysa Bello would return to Nigeria and Shaikh Ahmad Kutty was appointed as the Imam.

Shaikh Kutty was the former Imam of Toronto’s Jami Mosque and was educated in the traditional Islamic Sciences at Islamiyya College, Kerala and at the Islamic University of Madina.  He earned his M.A from the University of Toronto and pursued doctoral studies at Montreal’s McGill University. He is a well respected ‘Alim and has served on the Fiqh Council of North America.

Shaikh Ahmad Kutty’s appointment as the Imam would solidify the reputation of the organization as a moderate, mainstream institution that welcomed all ethnicities and nationalities into the mosque.

On the 15th May, 1988 (29th Ramadan, 1408) a few hundred Muslims turned out to witness the ground breaking ceremony at the site of the new Islamic Centre, despite the constant downpour of rain.

The official program was opened with a Qur’anic recitation by Hafiz Isthi Haq followed by brief speeches by Imam Shaikh Ahmad Kutty and Ahmad Baksh, a Board member. The program culminated with the turning of the sod by Mohamed Nasir, President of the Islamic Foundation. The soggy conditions did not dampen the excitement and joy of people and there was an outpouring of donations and pledges towards the building project.

The organization had now expanded rapidly with new committees formed to fundraise and manage the building construction and many professionals volunteered their time to serve the organization.

With the increase in the activities in Scarborough other committees were expanded or formed to look after events, education, youth and women’s programming as well as publications and media relations.

The building construction had begun and the fund raising drive was picking up but there would once again be a number appeals by the neighboring restaurant owner of the earlier Ontario Municipal Board (OMB) decision that allowed the site to be rezoned for the Islamic Centre.

These court appeals would tie up the organization and its resources for a number of years and, in November of 1989 following a court ruling on the parking issue, the organization had to increase the number of parking spaces which required the construction of a parking deck.

Early in the building campaign, donations were raised through personal appeals and monthly dinners that were sponsored by families and most often held in the cafeteria of Stephen Leacock Collegiate.

As the construction of the Centre proceeded, the organization would appeal for contributions from the Muslim world and visits were made there to raise funds. 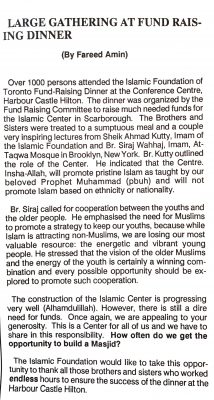 But another memorable type of fund raising event that many members fondly recall are the large gala dinners that would draw 1,000 people and that were held at large hotel banquet halls across the city.

In a progress report at the Annual Body Meeting on October 30th 1988, the Building Committee reported that the aim was to enclose the basement by the end of the year.

Dr. Jamil Dar, the Vice-President of the Foundation told the meeting that the organization had adopted an open door policy and input from members was welcome. Mohamed Nasir emphasized to the gathering the need for continued cooperation and unity, since “we all have one common goal – striving to please Almighty Allah.“

As the 1980s came to a close, the organization was holding Salaatul Taraweeh prayers during Ramadan at 100 Mclevin Avenue that was located a block away from the site of the new Centre. They also moved the weekly Ramadan Iftar dinners to Lester Pearson Collegiate Institute in Scarborough and these gatherings attracted hundreds of people. Eid prayers were now being held at the Metro East Trade Centre in Pickering and drew in excess of 8,000 people.

All of these gatherings mobilized the community as they waited in anticipation for the completion of the Islamic Foundation Centre at 441 Nugget Avenue.

*Muneeb Nasir is Chairman of the Olive Tree Foundation (www.olivetreefoundation.ca), a public endowment foundation. He served as a Board of Director of the Islamic Foundation of Toronto in the early 1990s, on a number of committees in the organization from 1974 to 1995 and as Chairman of its Program Committee for eighteen years. 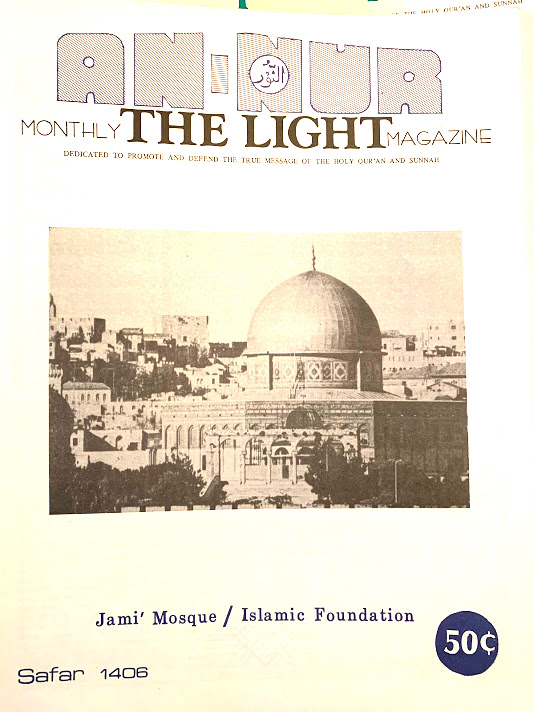 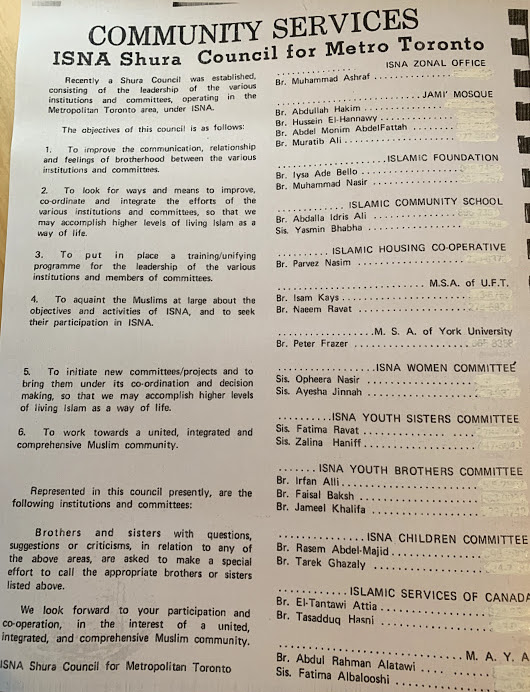 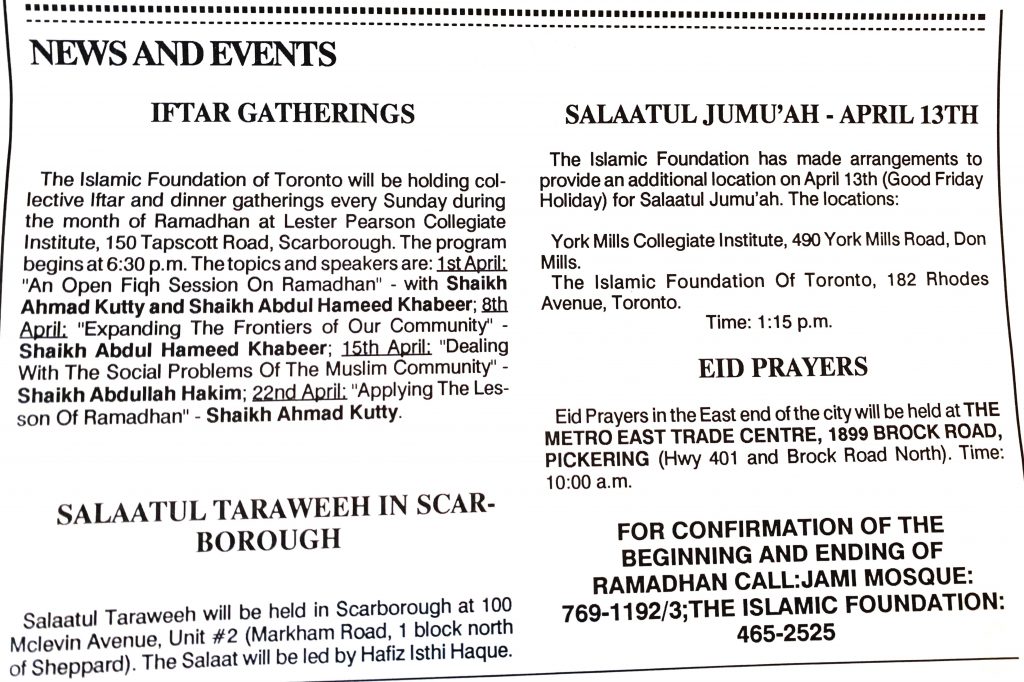 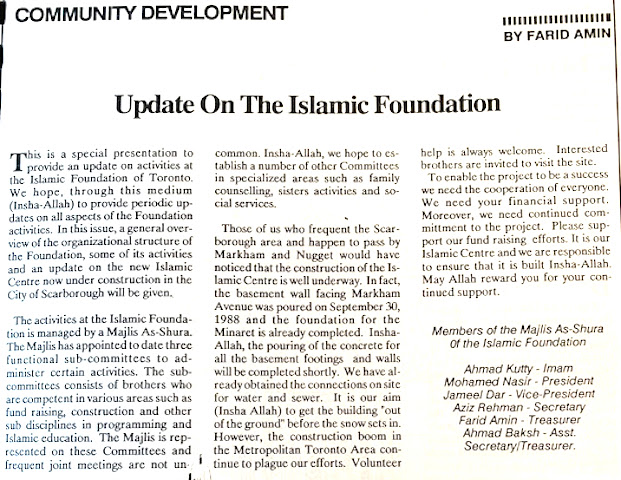 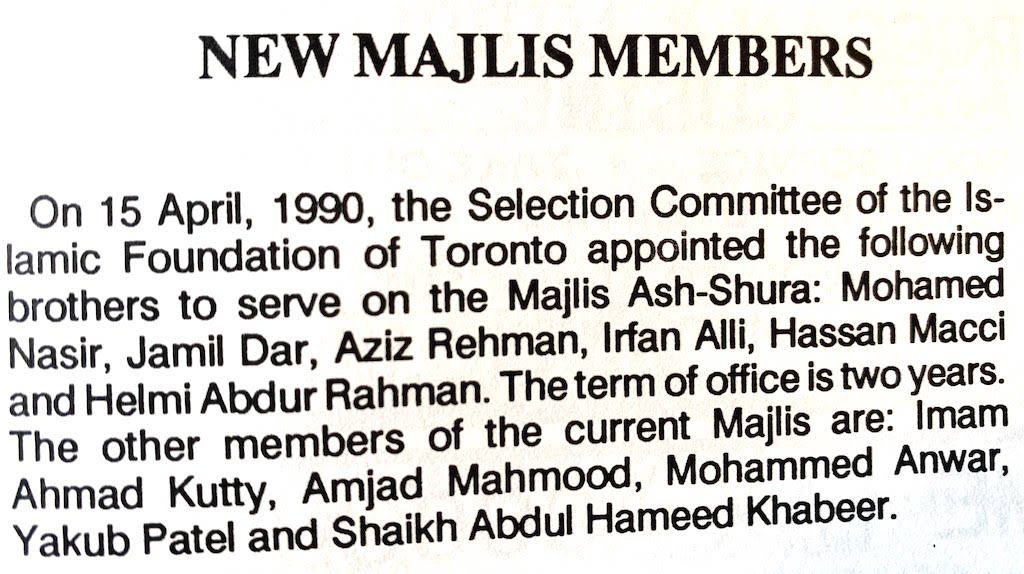 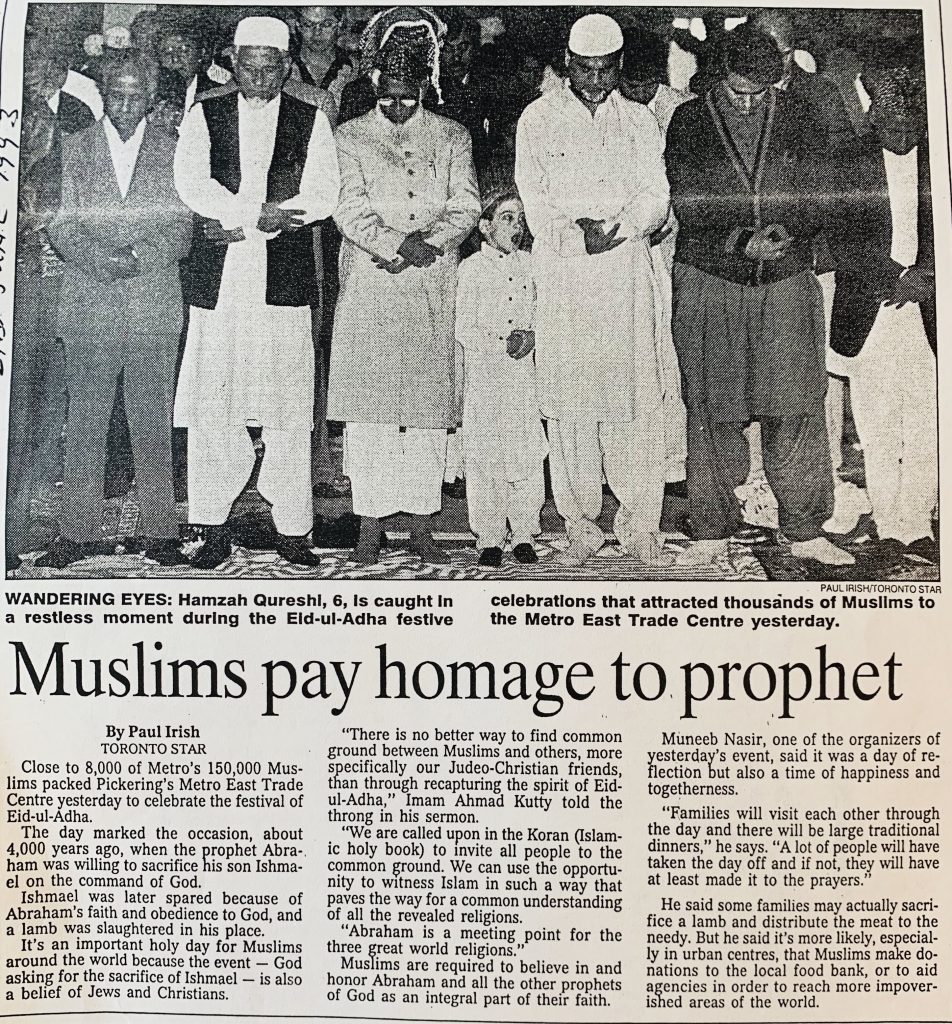 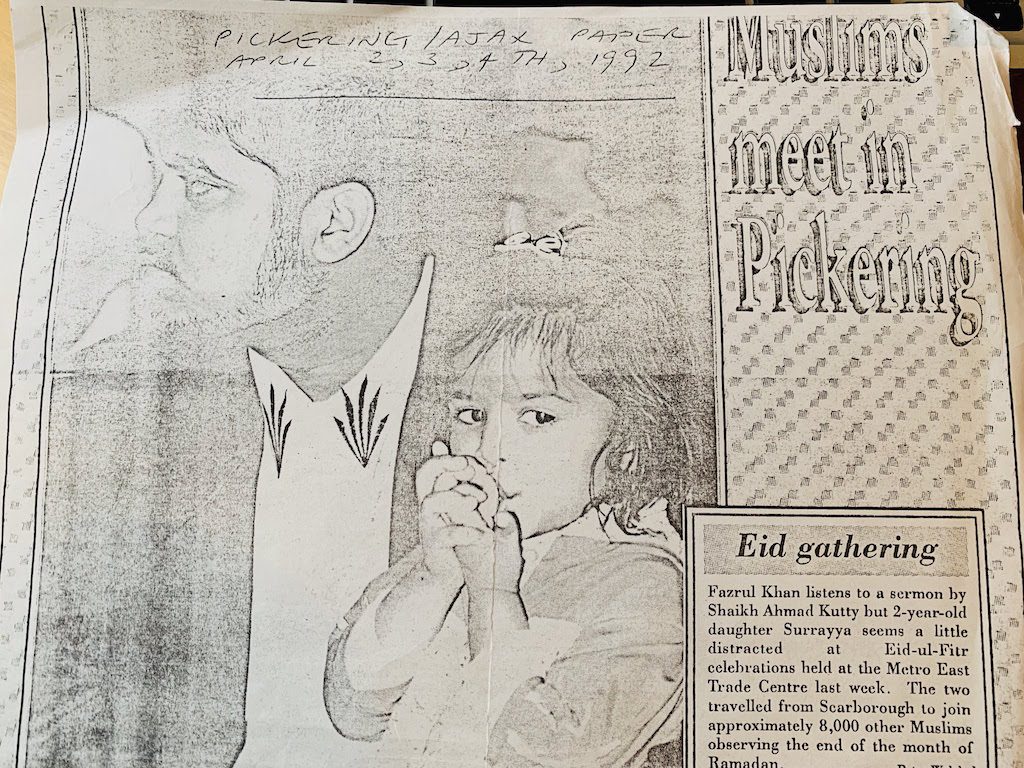