“A human ‘Ring of Peace’ conveys the message that we stand together to guard a sacred place of worship,” said Imam Shabbir Ally at a Ring of Peace and Interfaith Vigil held at Our Lady of Lourdes Church in Toronto’s St. Jamestown neighborhood on Thursday, April 25, 2019. “As we stood in front of this church today, our message to any would be attacker is that we are here to defend this church, you dare not attack this church while were are here.”

“We stand united in love against hate and against violence,” said Imam Ally. “We stand for peace and for justice. So by standing here today you have given a message to the promoters of violence around the world.”

Imam Shabir Ally read a statement to the gathering released jointly by Canadian Conference of Catholic Bishops and the Canadian Council of Imams that declared they were “rejecting all forms of hatred, violence and discord.”

“Both our religious traditions speak of peace, love and justice for all humanity,” they said. “It is abhorrent to see the people of Sri Lanka, whether gathered to worship on the feast of Easter or with family and friends in hotels, subjected to acts of hate and complete disregard for human life.”

“As faith communities in Canada, we stand together, offering our condolences and prayers for all of the victims of this terrorist attack and with a united voice rejecting all forms of hatred, violence and discord.”

Over 200 people from all faith traditions circled the Catholic Church that serves a large Sri Lankan community. They held signs with messages that included, ‘Standing Together for Peace, Friendship & Love’,  ‘Jews, Christians, Muslims Together’, ‘We Stand with Our Neighbors.’”

Muslim religious and interfaith leaders sent messages of support and condolences to the Christian community.

Muneeb Nasir, Co-Chair-National Muslim Christian Liaison Committee, Dr. Wael Shehab, Imam of Masjid Toronto and Imam Irshad Osman of Danforth Islamic Centre wrote to their Christian colleagues, “We are reaching out to offer support to you, our Christian friends and colleagues, as you cope with this devastating news.”

“We reach out, across the oceans, to the families in Sri Lanka and the Christian community there who are devastated and in grief; we reach out to our neighbors, Sri Lankan Canadians, whose pain is compounded by distance and to all Christians and say to you – we share your grief in this time of bereavement and although no words can ease the loss you bear, just know that you are very close in our thoughts and prayers.”

Since the Eater Sunday bombings in Sri Lanka, there have been many vigils held at churches throughout the country.

At an earlier multi-faith vigil held on Monday, April 25, 2019 at the Malvern Methodist Church in Scarborough, Irshad Osman, Imam of the Danforth Islamic Centre representing the Sri Lankan Muslim Community said, “We have to combat hate in Canada and around the world, wherever we have influence, and we have the obligation to confront, head on, those who harbour and/or propagate hate, be it a white, black, or brown supremacist.”

“Because one cannot harm another human being until he has completely dehumanized the other in his mind.”

Faith leaders, including a Catholic priest, a Jewish rabbi, a Hindu pandit and a Buddhist priest, also spoke at the vigil.

On Sunday April 28 2019, a ‘Ring of Peace’ was organized by the Toronto Board of Rabbis and Jews were joined by Muslims to show sympathy and solidarity with the Sri Lankan Catholic community at a Scarborough Church. 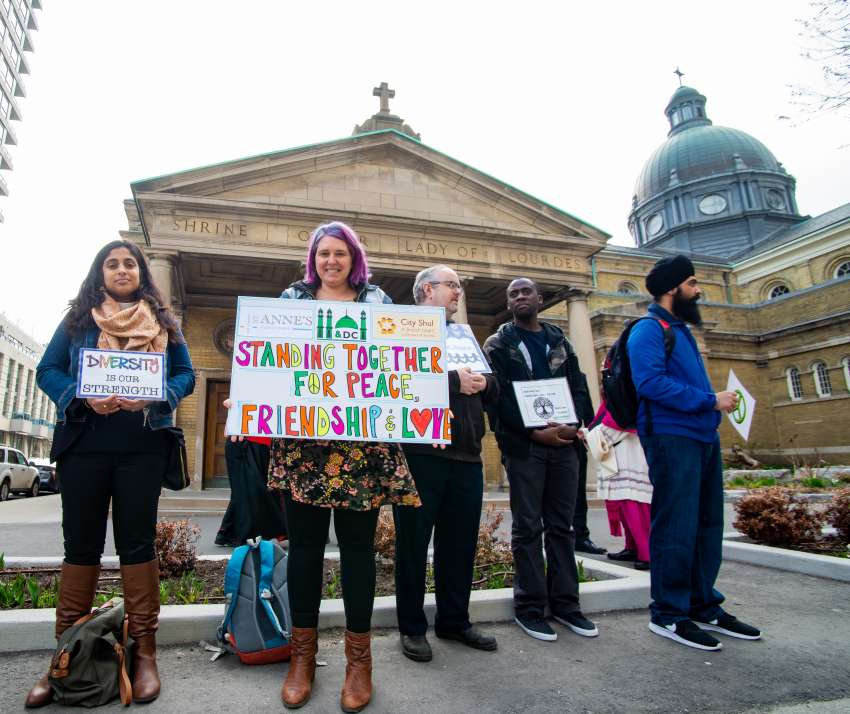 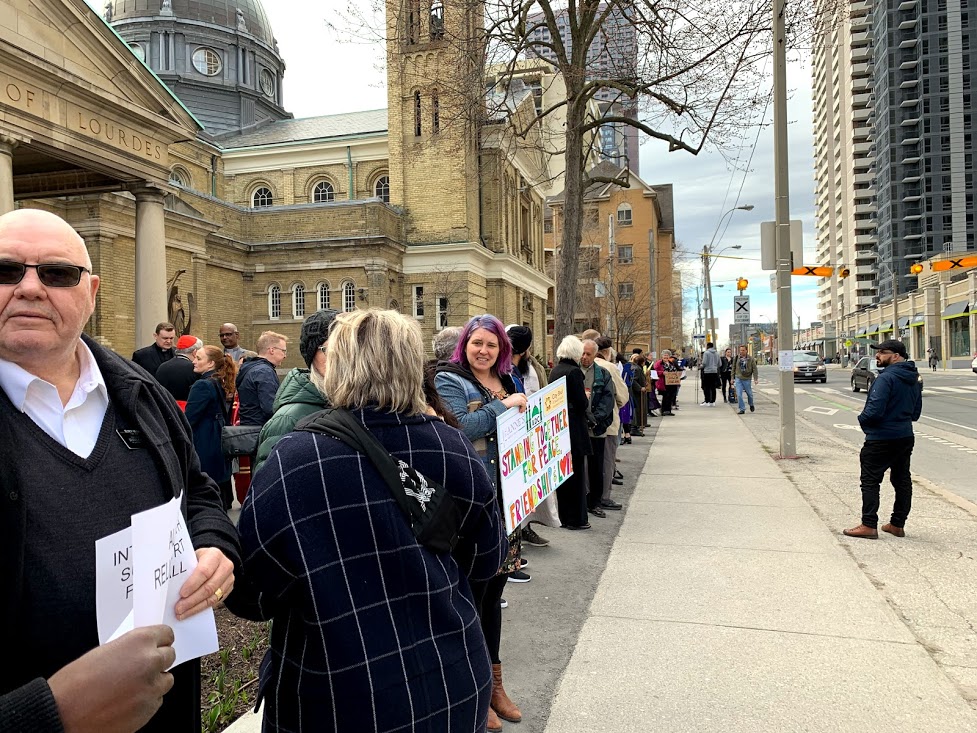 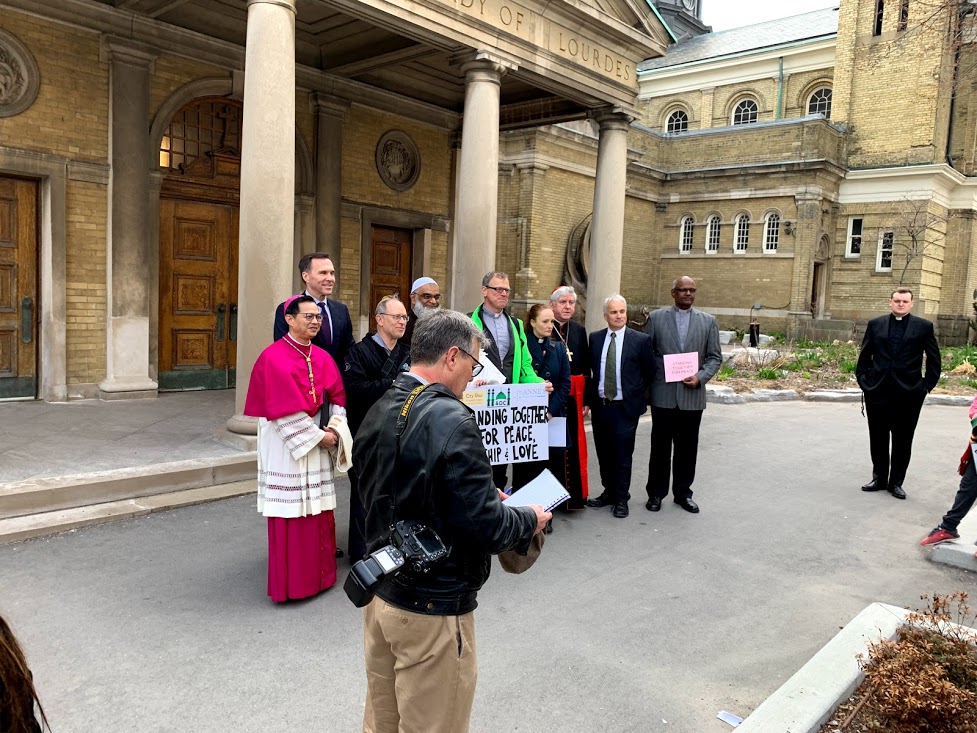 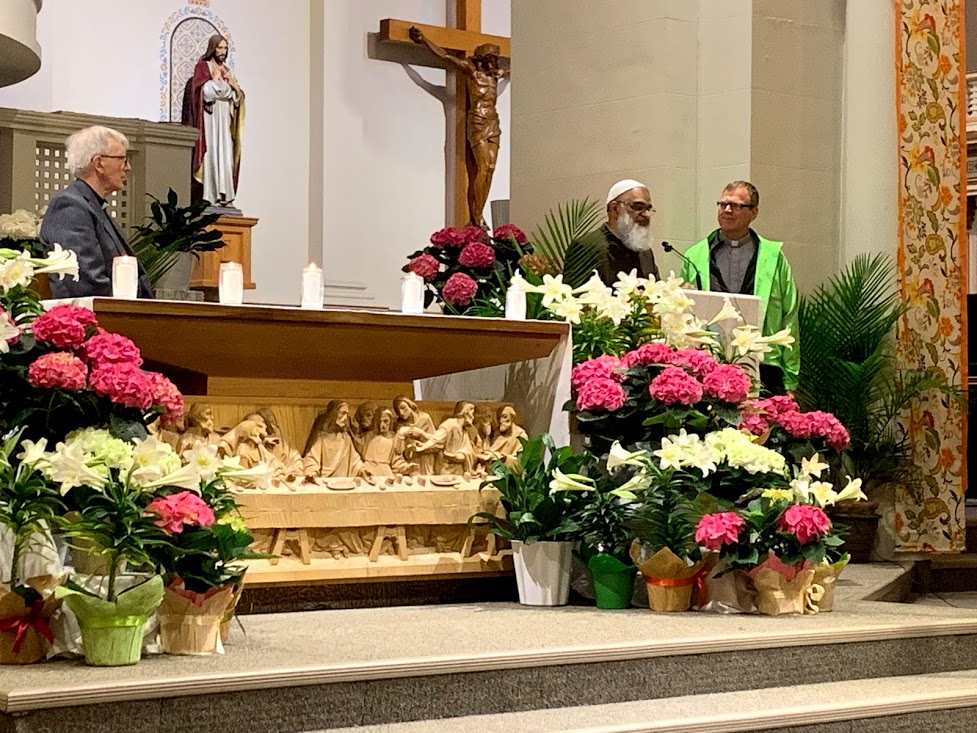 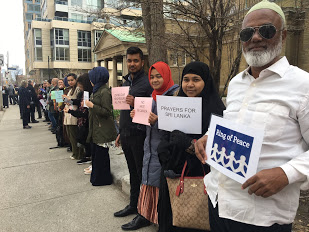 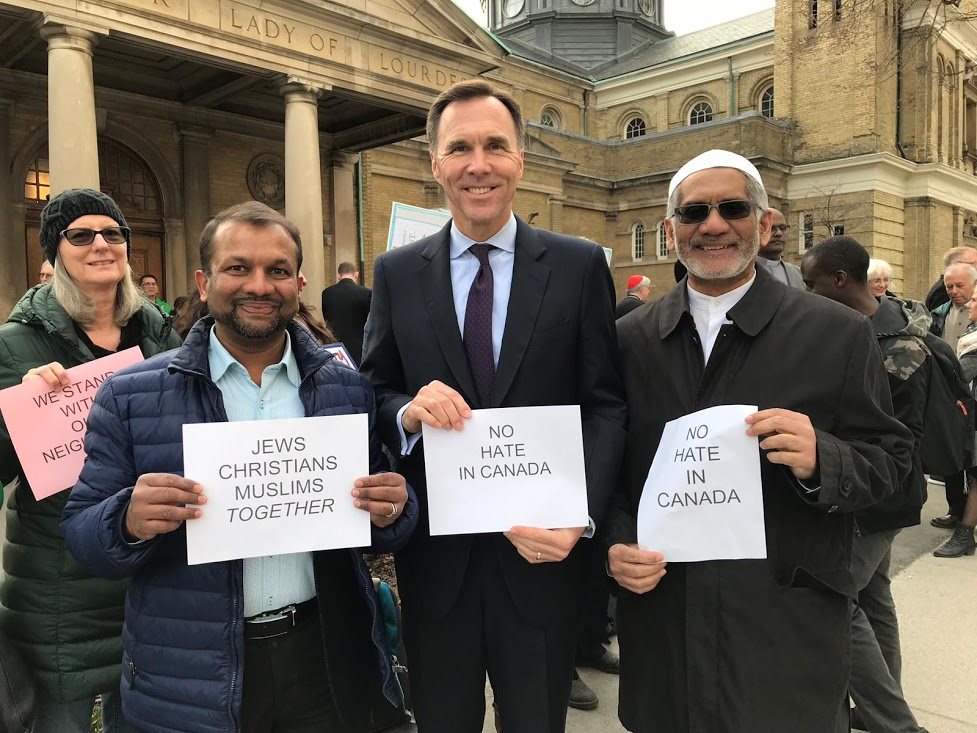 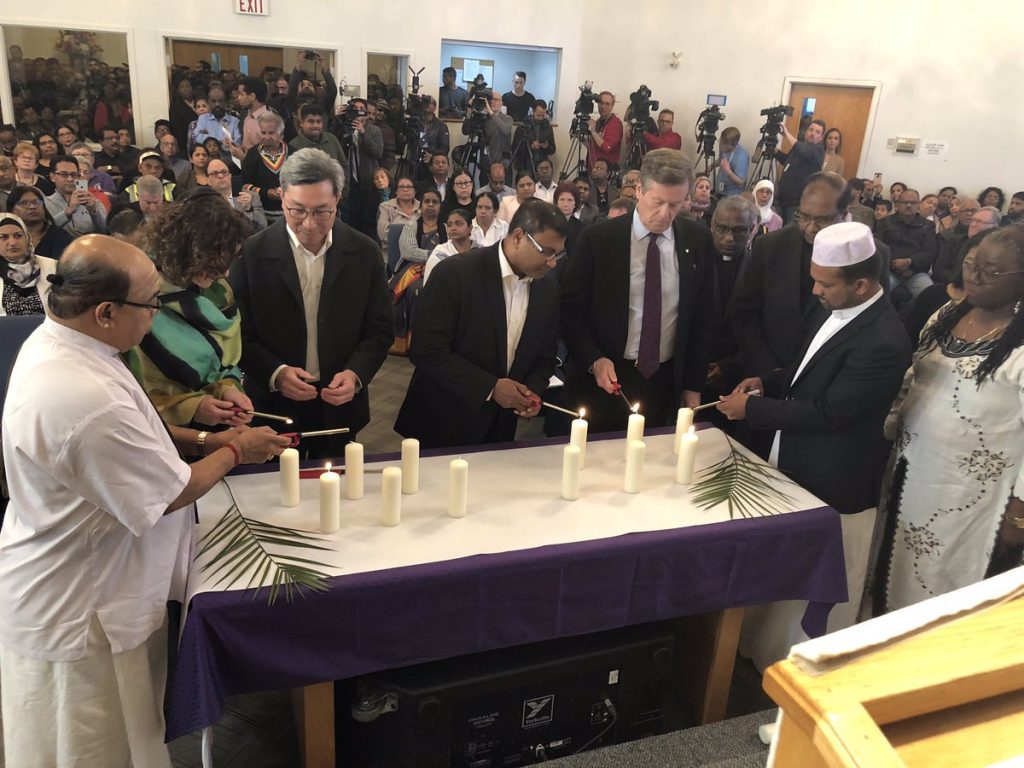 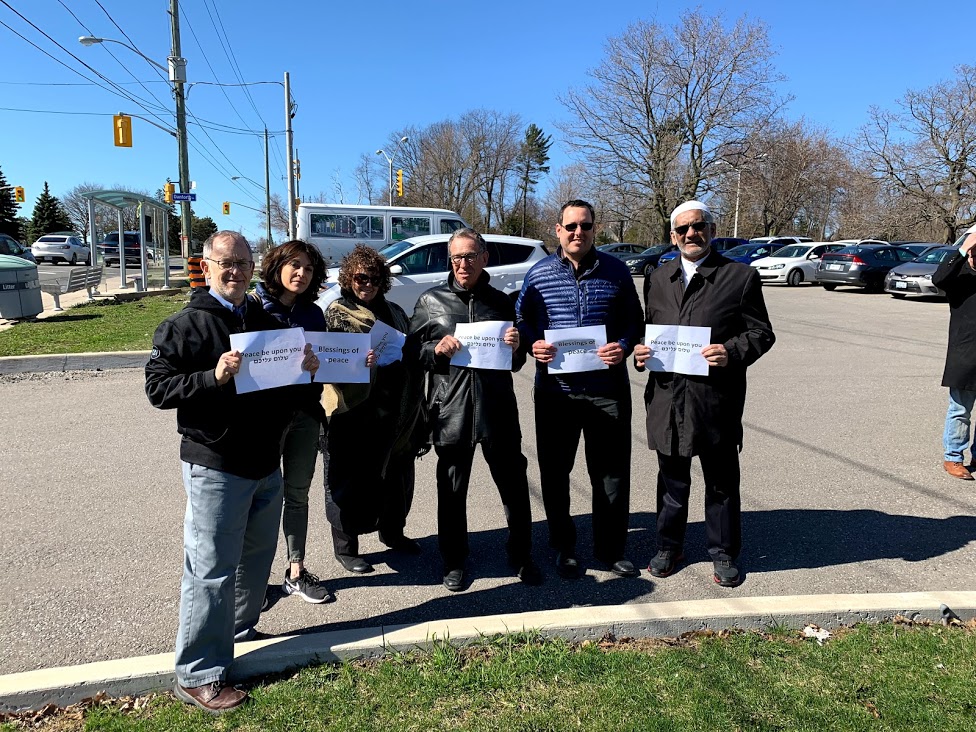 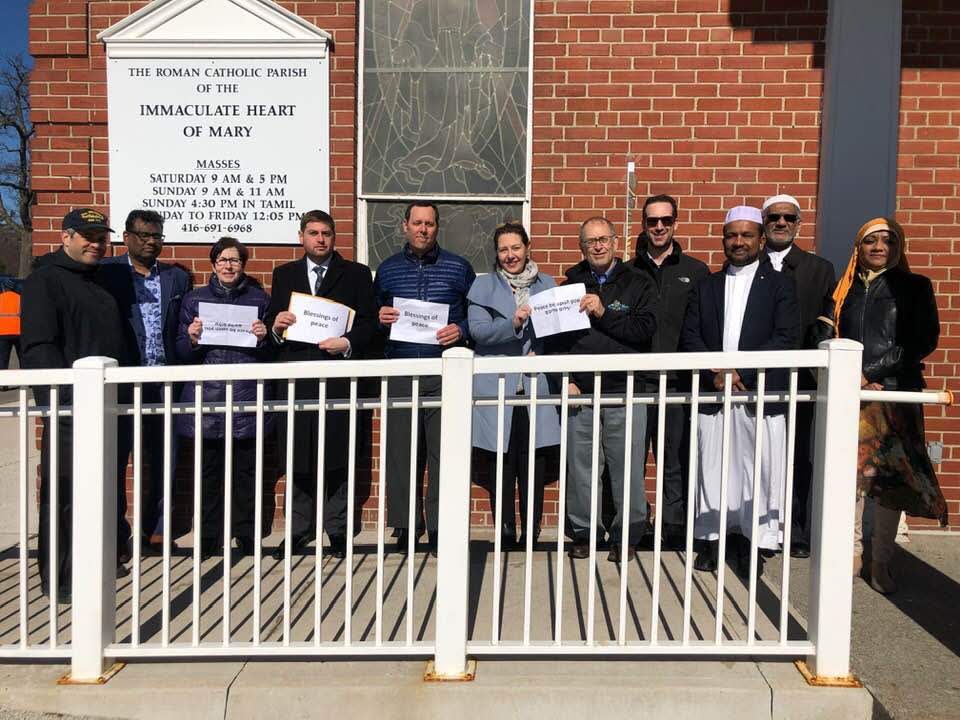