The Scarborough Muslim community launched a fundraising campaign on Wednesday to support the Scarborough and Rouge Hospital Foundation.

“The Scarborough Muslim community has joined hands to raise $250,000 over the next five years for the Scarborough and Rouge Hospital Foundation,” said Zuhair Syed of the organizing committee in his opening remarks. “And we are doing it by uniting us.”

“Every single person in this room plays a vital role in this community. You are civic leaders, presidents and directors of mosques and Islamic Centres and part of relief agencies and respected Imams,” noted Syed. “We thank each one of you because without your work the wheels don’t turn in Scarborough.”

The launch event was held at the Centenary site of the Scarborough and Rouge Hospital and was attended by leaders of Muslim organizations and mosques in Scarborough, as well as civic leaders, politicians and hospital officials.

The organizing group of the campaign – The Scarborough Muslim Community , Friends of SRH Foundation (www.friendsofsrhfoundation.com) – announced that they will be holding a walkathon on Family Day to raise funds.

“On behalf of the Scarborough Muslim Community, and in partnership with the Scarborough and Rouge Hospital (SRH) Foundation, we cordially invite you to join us for the 4th Annual Family Day Walkathon on February 19, 2018 as we undertake the challenge of raising $250,000 for SRH Foundation,” said the organizers.

“We are pleased to once again partner with Scarborough Muslim Community for the 2018 Annual Family Day Walkathon to raise money in support of Scarborough and Rouge Hospital,” said Guy Bonnell, Vice President, Community Development of SRH Foundation.

“Canadian Muslim mosques and organizations need to make their charitable work more public and showcase their good works in the mainstream,” Dr. Hamid Slimi told the gathering in his keynote address.

​Dr. Hamid Slimi is President of Faith of Life Network and Imam at Sayeda Khadija Centre. He has spearheaded successful fundraising campaigns to support a number of hospitals in Brampton, Mississauga and Toronto.

“Contribute and give generously,” said Dr. Slimi. “This is a time to do good publicly. Share your good and tell your story.”

Michael Mazza, President and Chief Executive Officer of Scarborough and Rouge Hospital Foundation, spoke of the needs of the three hospitals in Scarborough and the importance of the community supporting them.

The Scarborough hospitals is on a path of transformational change in how health care is delivered to the most diverse community in the world where 70% of people are of visible minority.

A broad spectrum of patient-centred care is delivered from three hospital sites – General, Birchmount and Centenary – and five satellite sites.

The SRH Foundation has launched the ‘It’s Our Time’ campaign to raise $90 million toward four priority projects that address the most urgent needs in the community: a new Emergency Department at Centenary; expansion of the Emergency Department at Birchmount; new Medical Imaging and Vascular Centre at the General; and HealthINC, an innovative new facility for dialysis and chronic disease management.

Shaykh Yusuf Badat, Imam of the Islamic Foundation, commended the mosques and organizations for joining hands to support the hospitals.

“I am delighted that this is a united front,” said Imam Badat. “There is no reservation that we should have in helping and supporting hospitals. “Hospitals serve countless people in maintaining and saving lives.”

“It is our civic and Islamic duty to do our part in keeping such important institutions running with state of the art service and equipment.”

The campaign got off to a flying start with over $100,000 pledged by the organizations and mosques at the launch event.

“There has never been a greater time for Scarborough to embark on major investments in our health care,” remarked SRH Foundation Vice President, Guy Bonnell. “We are fully supportive and appreciative of Scarborough Muslim Community’s efforts to promote healthy living in Scarborough.”

“Thank you again for your support and interest in the care and treatment at Scarborough and Rouge Hospital.” 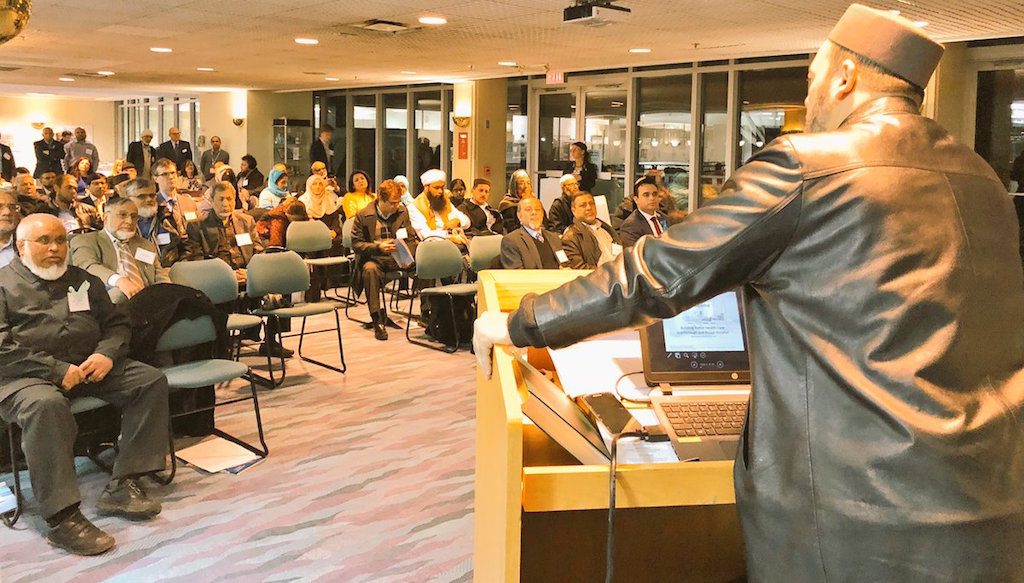 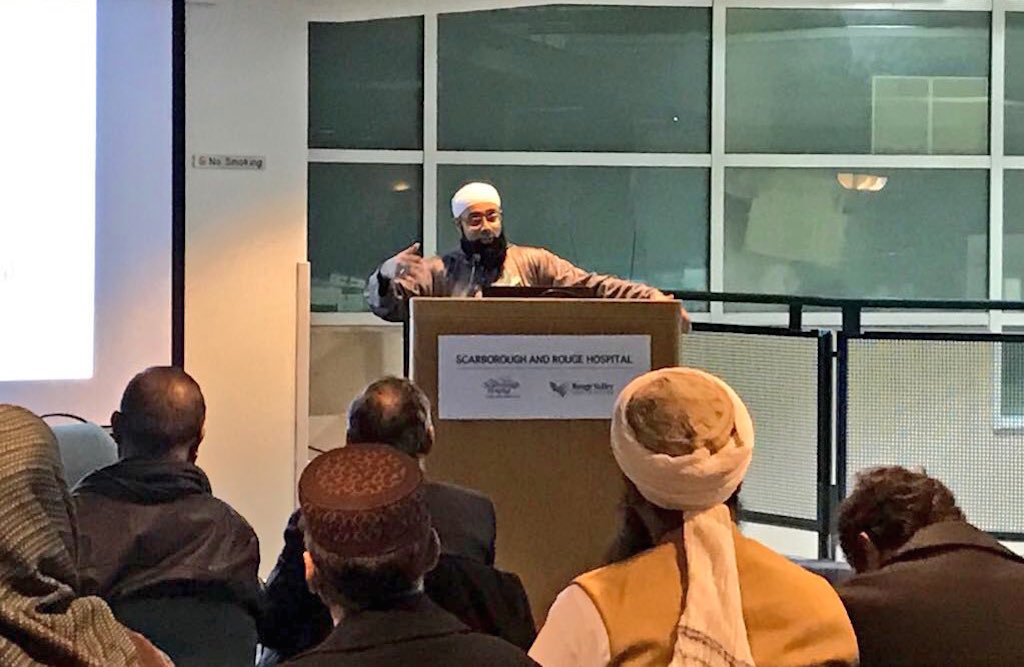 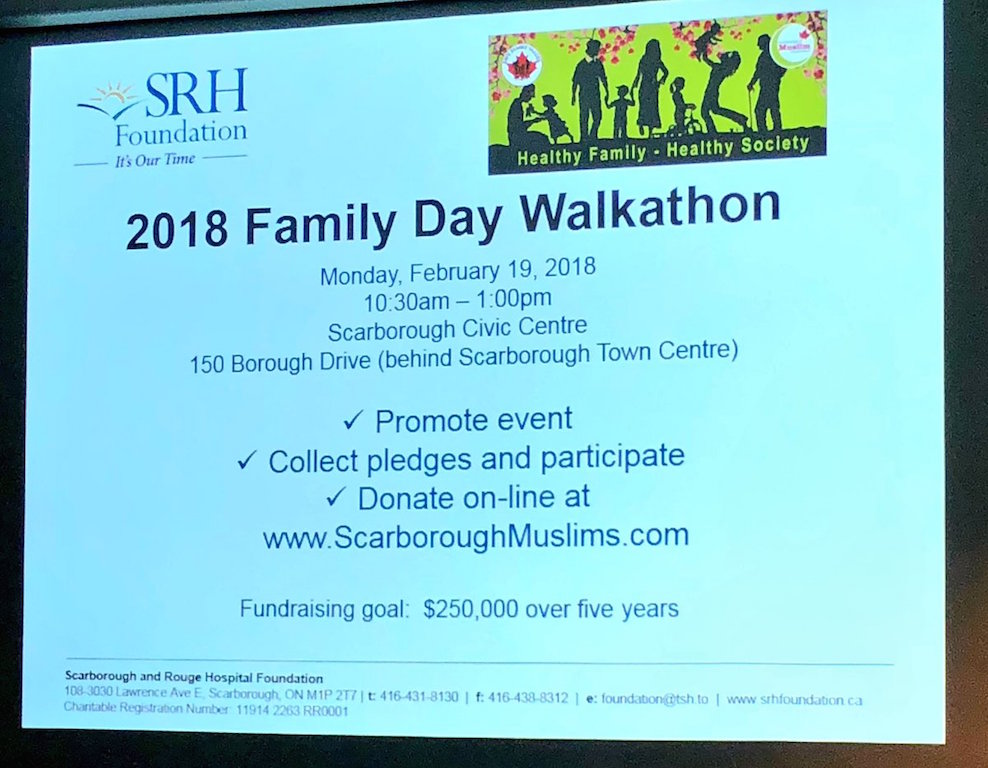 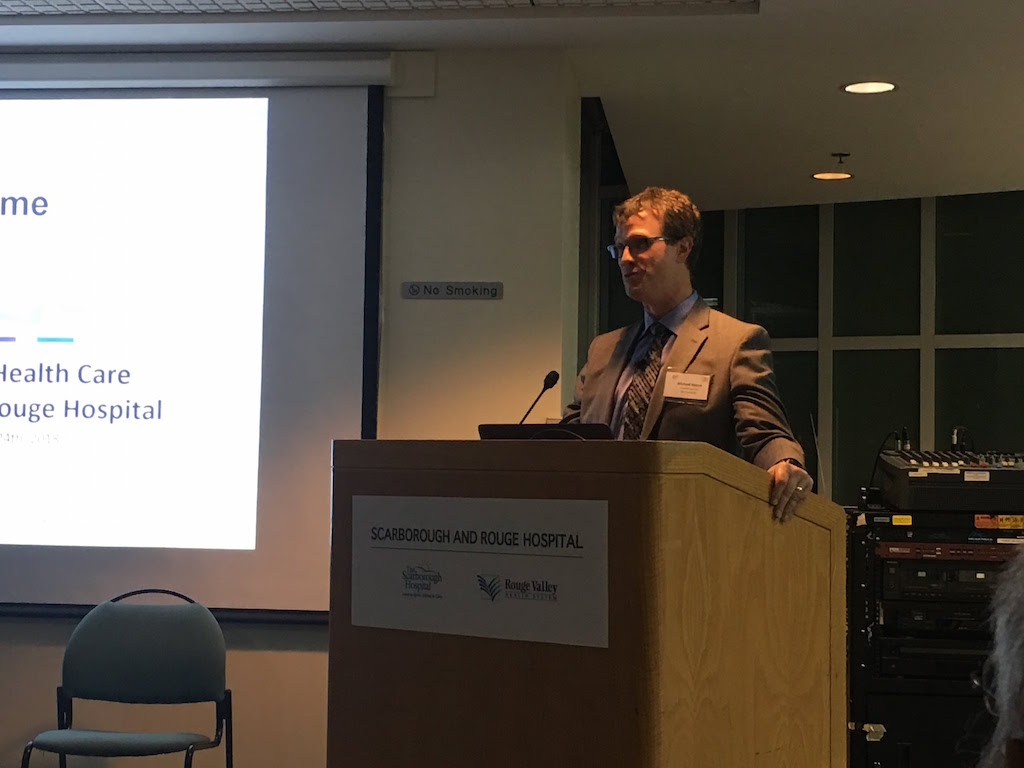