The Toronto-based non-profit, DawaNet, presented a cheque of $400,000 to Aymen Derbali for a new home on Saturday night at Le centre culturel islamique de Québec (CCIQ).

Derbali was left paralyzed from the chest down just over a year ago in the shooting at the Quebec City mosque.

The father of three who will never walk again was visibly emotional as he accepted a cheque.

“Every second, I imagine myself playing with my children in the house,” Derbali said. “This gives me strength.”

He received the cheque in front of hundreds of community members in the very room where he was shot seven times, at the Islamic Cultural Centre of Quebec City.

In December, DawaNet launched a crowdfunding campaign that raised $416,335 to help Derbali purchase a home adapted to his disability. He is currently living in a rehabilitation centre, away from his family. 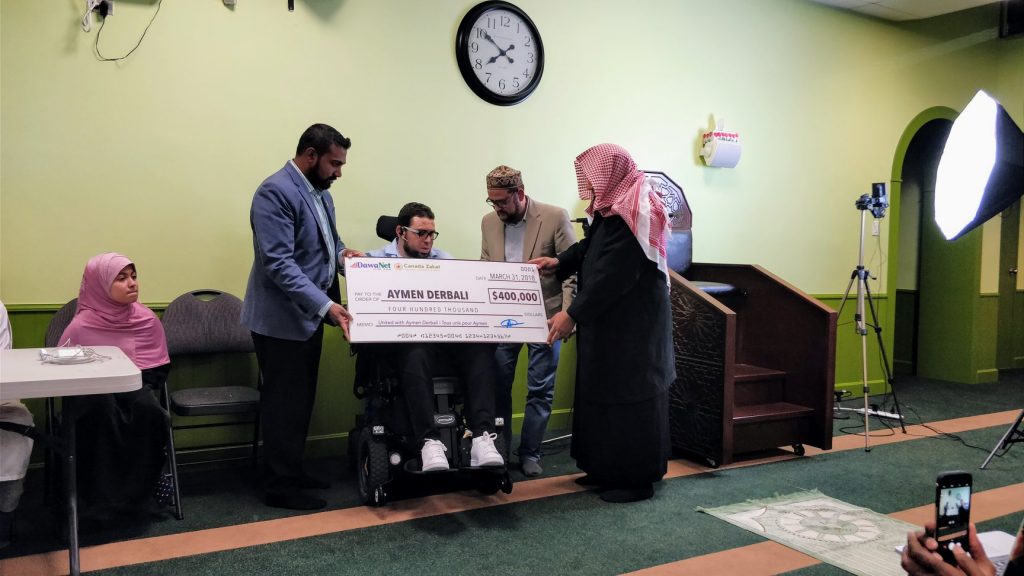 Aymen Derbali expressed his thanks to the people who have helped him since that tragic day last year and the donors who have allowed him to get a new home.

“My dear friends, fellow Quebeceors, fellow Canadians and my beloved Muslim community here in Ste. Foye, I want to take a moment to thank you everyone for the incredible show of support my family and I have received since the terrible attack on us here at our mosque,” said Derbali.

“I would like to start by thanking my beloved wife Nedra. My wife is the reason I am here before you today – strong and proud and optimistic for the future. My wife has been by my side since the moment I was taken to hospital on January 29. She has not left my side and I thank her from the bottom of my heart for being there for me and helping me to heal. She has taken care of me and our children with dignity and patience. She has made me so proud of her. Thank you dear Nedra.”

“I want to thank my neighbours and friends who have supported our family, including our three beautiful children – helping us with so much, “ he added. “I want to thank DawaNet – this organization has stood with me and my family from the beginning – providing wonderful support to me, and as well to the other families affected by this tragedy. We appreciate their brotherhood and sisterhood. This is what Islam teaches us. To love and help one another – no matter what.”

“I want to thank my fellow Quebecors and fellow Canadians for helping DawaNet raise enough money to be able to allow me to live in a home that is accessible. I am looking forward to living there with my beautiful family and I am looking forward to a bright future, despite of the darkness we have been through. I will always have faith in God – that good things will always come to those who are patient, kind, generous, and sincere. I am proof that when we show love, the world will show love in return.”

About 4,800 donors from more than 40 countries contributed to the campaign, according to DawaNet.

“To be here after over a year of what happened, and to be part of something positive, something that Aymen can look forward to for his future with his family and kids… emotionally it was really heartwarming,” said Tariq Syed of DawaNet.

The family has put an offer on a house and hopes to move in there in May.

The Quebec City mosque shooting was a mass shooting that occurred on January 29, 2017, at the Islamic Cultural Centre of Quebec City. Six worshippers were killed and nineteen others injured when the lone gunman, Alexandre Bissonnette, opened fire after the end of evening prayers.

Bissonnette pleaded guilty last Wednesday to all charges against him, including six counts of first-degree murder and six counts of attempted murder, reversing a not-guilty plea made two days earlier.