“Terror in a Pittsburgh Synagogue. Multiple fatalities. Shooter may be among the dead.”

The words came crashing through my iPhone screen leaving a sense of dread that would consume me for the next few hours. How could it happen again? Were there fatalities? How many? Who did it? Why?

The questions keep coming with no immediate answers.

“Pray that it’s not a Muslim,” someone wrote on a Facebook page.

This is how it always is. New York, Orlando, Toronto. The first sentiment after the initial shock is a silent prayer that the perpetrator is not a Muslim.

The Muslim community, so often accused of complicity by silence, has been put on the defensive.

This, despite the fact the majority of terror incidents in the U.S. is often the work of someone who either has a mental health issue or harbours hate based on ideology, race or misogyny. And this, despite the fact in every case, our leaders have issued condemnations, given Friday sermons and filled our social media pages with outpourings of grief, sorrow and solidarity with the victims and their families.

I reflected on the Quebec Mosque shooting two years ago when six Muslim worshippers were gunned down during evening prayers.

The entire country came together, and the outpouring of grief and outrage at the enormity of the tragedy was profound.

Jews, Christians, Hindus, atheists and many others of faith or no faith came together to grieve and to condemn the terror perpetrated by a young man who was influenced by far-right ideology.

Yet January 29 will remain as a painful memory for the many families who lost husbands, brothers, fathers and sons.

With the unfortunate shooting in Pittsburgh, and the death of 11 worshippers, mostly defenceless elderly men and women, I resolved not to remain silent. Their families too, and the entire Jewish community would have painful memories of a day when lives were shattered in their place of worship.

I have seen first-hand the effect of terror. My brother-in-law was a victim in the horrific twin towers attack in New York City. He was an employee of Pitney-Bowes, trying to evacuate the 102nd floor of the second tower when it came crashing down.

My sister, like thousands of others, was devastated leaving a wound that may never heal.

The invitation to participate in a Ring of Peace came from Imam Hamid Slimi, a mentor and champion of interfaith harmony. As Imam of the Sayeda Khadija Mosque, he is a leader of the Canadian Council of Imams and is active in promoting harmony and interfaith relations amongst the various faith congregations in the Greater Toronto Area.

With just a few hours to confirm our engagement, I first consulted my family members. The response was quick and positive.

I got Islamic Institute of Toronto (IIT) Board approval, which also came swiftly. We were assigned the Beth Sholom Synagogue as part of a larger effort led by Mr. Osman Khan of the Imdadul Islamic Centre, and Fatima Sajan of the National Council of Canadian Muslims.

That was Wednesday. By the next day we had organized a bus and created sign-ups on Eventbrite. With everything set to go on Saturday, we began making preparations for a Ring of Peace event, the first that our Institution would be engaged in.

Saturday came with over 15 families gathered at IIT awaiting our arranged transportation – a school bus that never came!

“Sorry for the misunderstanding,” the driver said. “I made a mistake in the booking. I can leave in fifteen minutes.” That would have made us very late.

Not to be deterred, we carpooled and made our way to Beth Sholom at Eglinton and Bathurst in Toronto. In the rush to be on time, we even forgot the poster boards on which we wanted to express our solidarity with our Jewish brothers and sisters.

And so on a cold, windy morning, over 60 Muslims from the east end of Toronto (Islamic Foundation of Toronto volunteers also joined) held hands and made a semi-circle around the front of the synagogue.

It was the most liberating and beautiful thing that could have happened, despite the tragedy.

We came face to face with the congregants who began to arrive in twos and threes. They seemed to know what we were there for. Every one of them smiled and said thank you. Many burst into tears or cried, touching us in ways that we could never have imagined. Their loss was our loss and we felt this sense of oneness and camaraderie.

Later, we entered the synagogue where our Chairman, Fareed Amin, gave brief remarks.

“None of us is as strong as all of us,” he said. “On behalf of the entire Muslim Community we offer our sincere condolences on your loss and resolve to stand with you in a true spirit of brotherhood. Sholom. “

It was truly an inspiring moment, one that that we would forever be proud of.

We hope that our simple act of solidarity made a difference and brought some hope to a congregation and people who continue to suffer from hate and bigotry.

Farhad Khadim is a Director of the Islamic Institute of Toronto.

[This reflection was originally published on December 12, 2018 in Convivium. Convivium is an online space that brings together citizens of differing convictions and religious confessions to contend for the role of faith in our common life]. 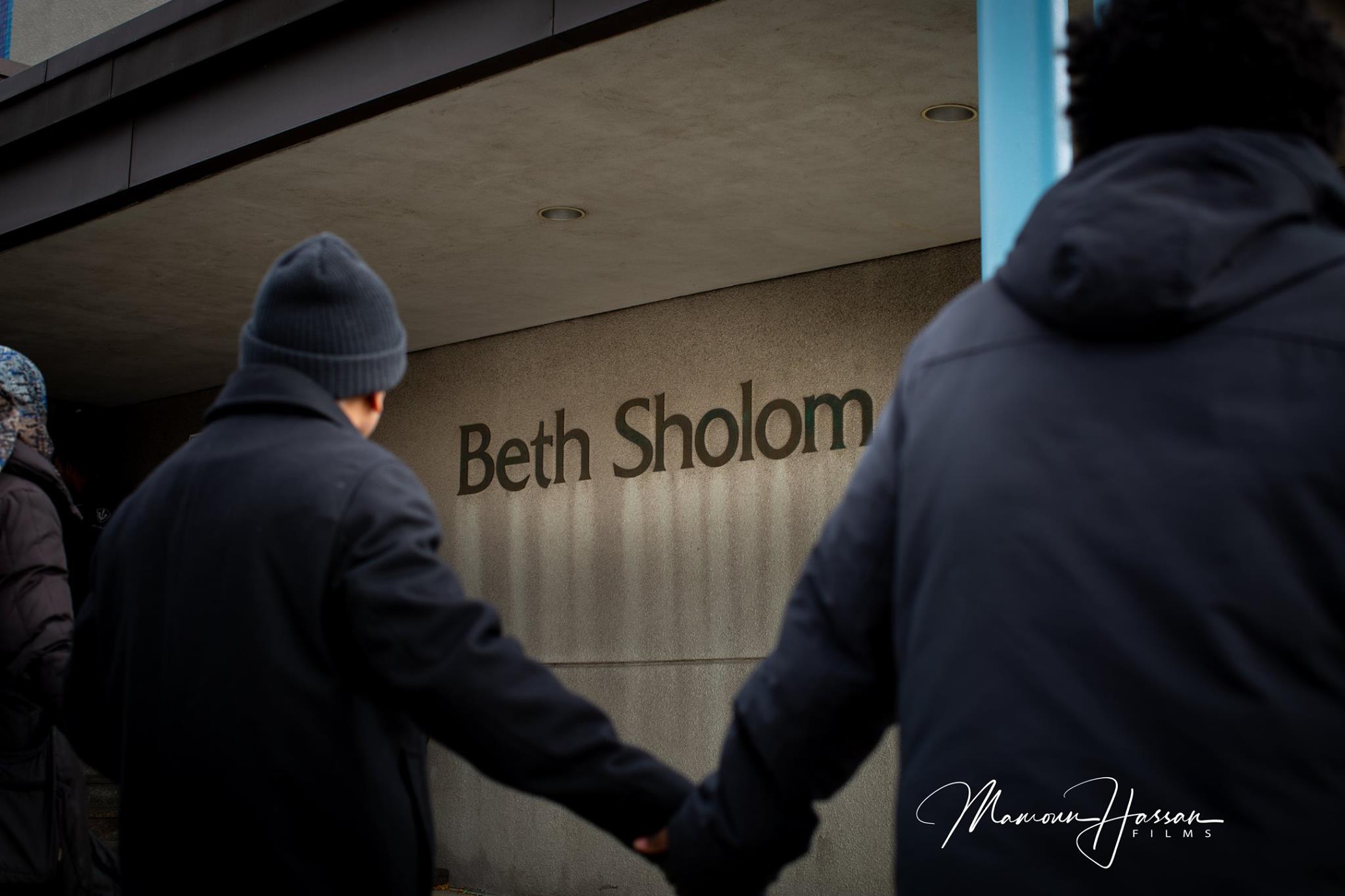