An Abrahamic Dialogue series was launched in Toronto on Thursday evening with the aim of bringing faith communities together to share experiences and learn from each other.

The first event in the 3-part series titled ‘Hospitality in the Face of Adversity’ was held at Regis College at the University of Toronto.

“The purpose of these events is to present the audience with the opportunity to learn about how each faith has created programs and organizations that address key social issues of our time,” said Barbara Boraks, Executive Director of the Christian Jewish Dialogue of Toronto. “We will share experiences and stories, and learn from each other.”

Arij Elmi gave the Muslim perspective on the topic of hospitality. Elmi is a PhD candidate at OISE, a social worker, a women’s self-defence instructor, a junior fellow at Massey College and board member of Hard Feelings Mental Health.

“According to Mona Siddiqui in a wonderful book, Hospitality and Islam: Welcoming in God’s Name, she says that welcoming those who are foreign to us is the definition of hospitality in Islam,” said Arij Elmi. “So hospitality for her is a multilayered concept, it can refer to the material giving and the physical hosting of guests but it is not the contemporary understanding of charity or entertainment that we associate hospitality with.”

“So it is not inviting a friend over for dinner with the intention of deepening a connection or bond with them, rather it is someone who is external to us. So, she states that when honored as an exercise of the divine imperative, hospitality is about knowing that reaching out to others is an act of worship that is challenging, humbling and that is spiritually transformative. Hospitality has the capacity to transform us as individuals and as a collective,” added Elmi.

Providing the Jewish perspective on the topic was Rabbi Louis Sachs. 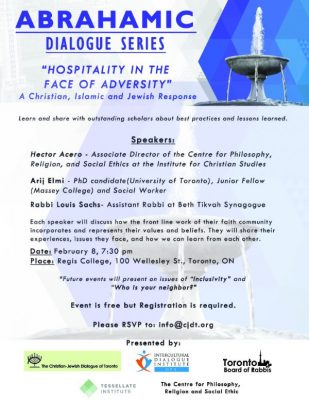 Rabbi Sachs is Assistant Rabbi at Beth Tikvah Synagogue and a graduate of UC Davis and the Ziegler School of Rabbinic Studies. He has a deep interest in the relationship between Jewish Law and Ethics.

“All throughout the Torah we get this sense of hospitality and of welcoming others which really makes it an imperative,” said Rabbi Sachs. “On a more direct level, some of the things that I see recently in the Jewish community such as the immigration issue all throughout the U.S. when it came to the travel ban and such issues, I really see the Jewish community take an active role. One of my professors in Rabbinical school sent us an email that there will be no class tomorrow because he will be arrested because he was protesting the travel ban and he refused to leave. He wanted his voice heard.”

“I have seen this over and over again with friends of mine and Rabbis who speak out on these issues,” added Rabbi Sachs.

Hector Acero, the Associate Director of the Centre for Philosophy, Religion, and Social Ethics at the Institute for Christian Studies, offered a Christian perspective on the topic of hospitality.

“In GAUDIUM ET SPES, one of the central documents produced in the context of the Second Vatican Council which famously describes the relationship of the Church and the world at large as follows, ‘The joys and the hopes, the griefs and the anxieties of the people of our time, especially those who are poor or afflicted are the joys and hopes, the griefs and anxieties of the followers of Christ, as well. Nothing that is genuinely human fails to find an echo in their hearts. For theirs is a community of people united in Christ and guided by the Holy Spirit in their pilgrimage towards the Father’s Kingdom. Theirs is a message salvation for all humanity. That is why we cherish a feeling of deep solidarity with humanity and its history,’” said Hector Acero.

“This is, I believe, one of the central points of the Christian teaching about hospitality. It really isn’t about providing a space for another person or about giving her something we have in excess. As paradoxical as it sounds, hospitality in our tradition is about finding a space in the sorrow of the other and the joys. Through a myriad of stories of inclusion, inclusion of the unclean, the unethical and even the oppressors, Jesus teaches us, as Christians, that we are most hospitable when we become able to ask for home in the deepest yearnings of our fellow humans and share meaningfully in their struggles, only then the shelter, the food and the protection we can offer will serve a purpose,” noted Acero.

The Christian Jewish Dialogue of Toronto, Toronto Board of Rabbis, Tessellate Institute, The Centre for Philosophy, Religion and Social Ethic, and the Intercultural Dialogue Institute are jointly organizing the 3-part series of dialogues.

“These programs are being created under a larger initiative of the Christian Jewish Dialogue of Toronto: practical and applied theology,” said Barbara Boraks, Executive Director of the Christian Jewish Dialogue of Toronto. “There is a growing recognition that faith based organizations have always been at the front line of social justice issues. These programs will allow us further to develop this recognition. In May, we will hosting an event discussing the issue of Inclusivity, followed by a final event in the fall on the topic Who is your neighbor?” 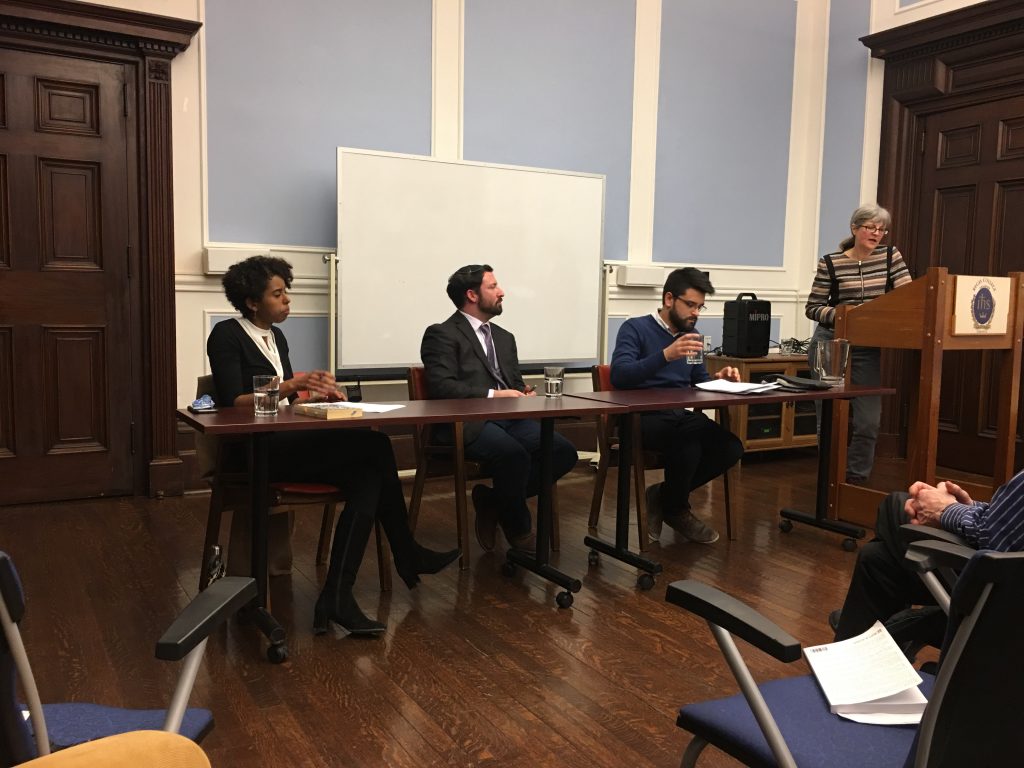