Toronto will host the 7th Parliament of the World’s Religions, the world’s largest interfaith gathering in November 2018.

In a May 2 press conference and reception at the Toronto City Hall, Parliament of the World’s Religions Executive Director Dr. Larry Greenfield said the 2018 event is an “extraordinary opportunity for people of the globe to engage the crucial issues of our world, such as climate change, poverty, and violence.”

“We are especially encouraged by the Indigenous, women, and young people who will be featured among the international leaders coming from around the world to this Parliament,” added Greenfield.

More than 10,000 people will participate in the 2018 Parliament, which will last for seven days and comprise more than 500 programs, workshops, and dialogues, alongside music, dance, art and photography exhibitions, and related events presented by the world’s religious communities and cultural institutions.

Since the historic 1893 World’s Parliament of Religions in Chicago, modern Parliaments have attracted participants from more than 200 diverse religious, indigenous, and secular beliefs and more than 80 nations to its international gatherings in Chicago (1993), Cape Town (1999), Barcelona (2004), Melbourne (2009), and Salt Lake City (2015).

These Parliament events are the world’s oldest, largest, and most inclusive gatherings of the global interfaith movement. 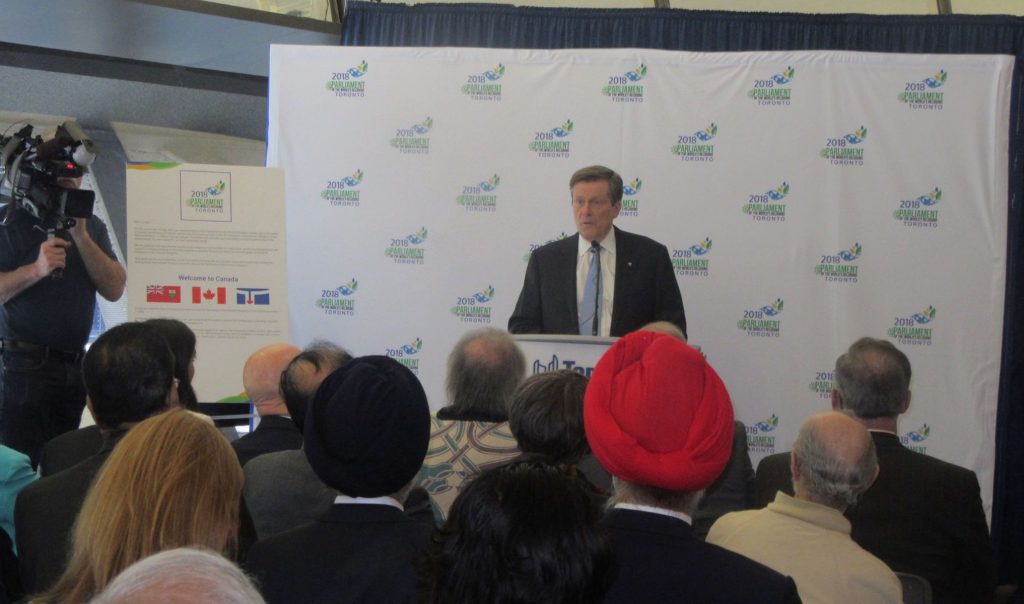 “Nowhere is our diversity more evident than in the variety of places of worship you can find in communities across Toronto,” said Mayor Tory. “These institutions are an integral part of the social fabric of our city . . . [and] our faith communities help build bridges of mutual understanding and make Toronto a welcoming place for people of all beliefs.”

Professor Mark Toulouse, Co-Chair of the host committee, believes that “the selection of Toronto was a perfect match for the Parliament.”

“As one of the most international, multicultural, and religiously pluralistic cities in the world, Toronto provides a perfect venue for the Parliament of the World’s Religions,” noted Toulouse. “More than 140 languages are spoken every day, and at least 47% of Toronto’s population speak a native language other than French or English. Over half were born outside of Canada, representing more than 200 ethnic origins.” 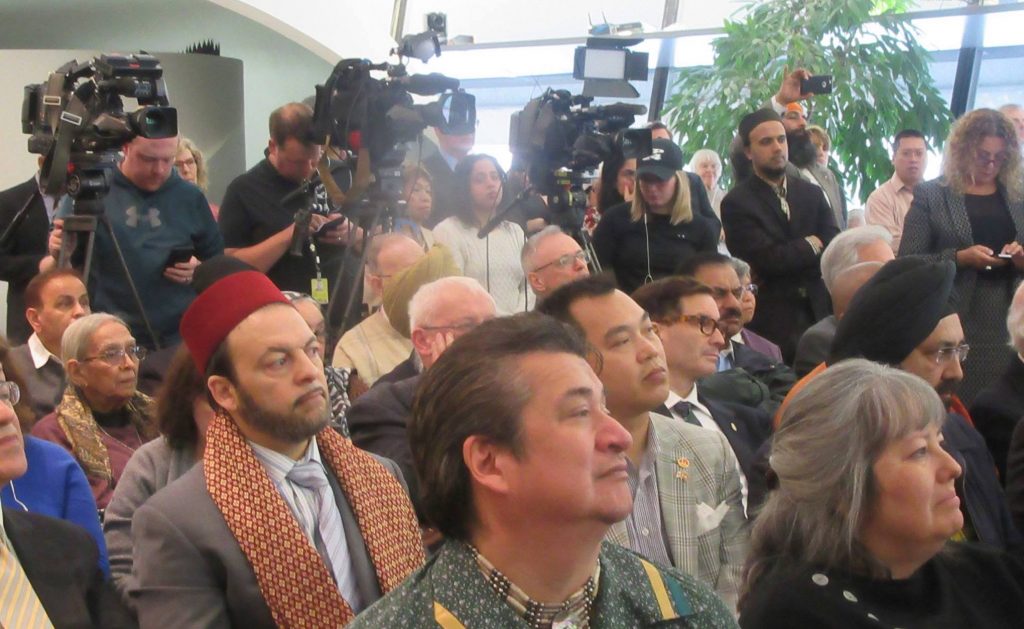 The exemplary effort of Canadians—and especially the people of Ontario—to welcome the stranger and immigrant, honor indigenous communities, and protect the earth with its public initiatives provides inspiration for other global cities that desire to build a better world.

“Toronto is a place where important conversations are taking place about reconciliation, environmental approaches, and the integration of immigrant populations. A vibrant and wide-reaching interfaith community was a determining factor in answering the question: Why Toronto? Why now?” said Parliament Site Selection Committee Chair, Andras Corban Arthen.

The Metro Toronto Convention Centre (MTCC) will host the thousands of participants of the Parliament in 2018.

“We are honoured to be the first Canadian venue to host the Parliament of the World’s Religions,” said President and CEO Barry Smith of the venue. “Toronto is proud of its cultural diversity and we look forward to welcoming delegates from around the world who stand for peace, justice, and sustainability.”

Professor Toulouse concurs, “In our time, few things are more important than developing global literacy concerning religion and initiatives seeking social justice, partnerships and dialogue among religions, and understanding between the religious and the non-religious.”

“The content and global relationships associated with the Parliament advances all these ends in significant ways. For me, it is especially exciting to welcome the Parliament to Toronto as it celebrates its 125th anniversary,” added Toulouse.

In the coming 18 months, the 2018 Parliament program will be developed in close consultation with Toronto itself, as well as with religious and civic stakeholders across Canada and around the world, so that the event reflects the perspectives and priorities of multiple faiths and ideologies.

Rev. John Joseph Mastandrea, Parliament Ambassador and Interfaith Chaplain who serves on the Executive Committee of the Greater Toronto Interfaith Council, will be among those introducing the 2018 event to groups across Ontario.

“More than a symbol, the Parliament is an instrument of peace. This is why the Parliament of the World’s Religions will be converging on Toronto in 2018,” said Rev. Mastandrea. 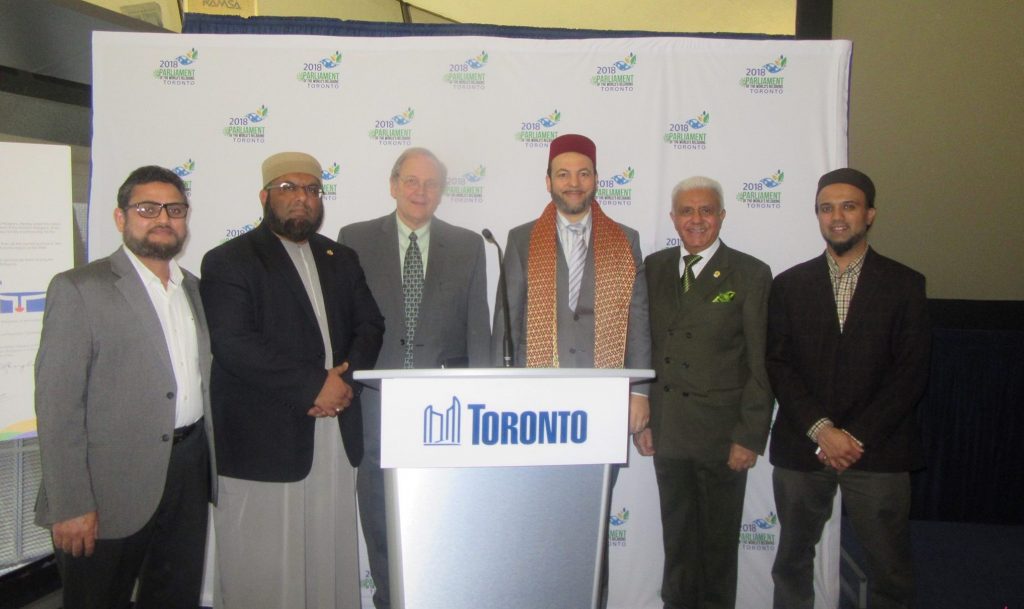 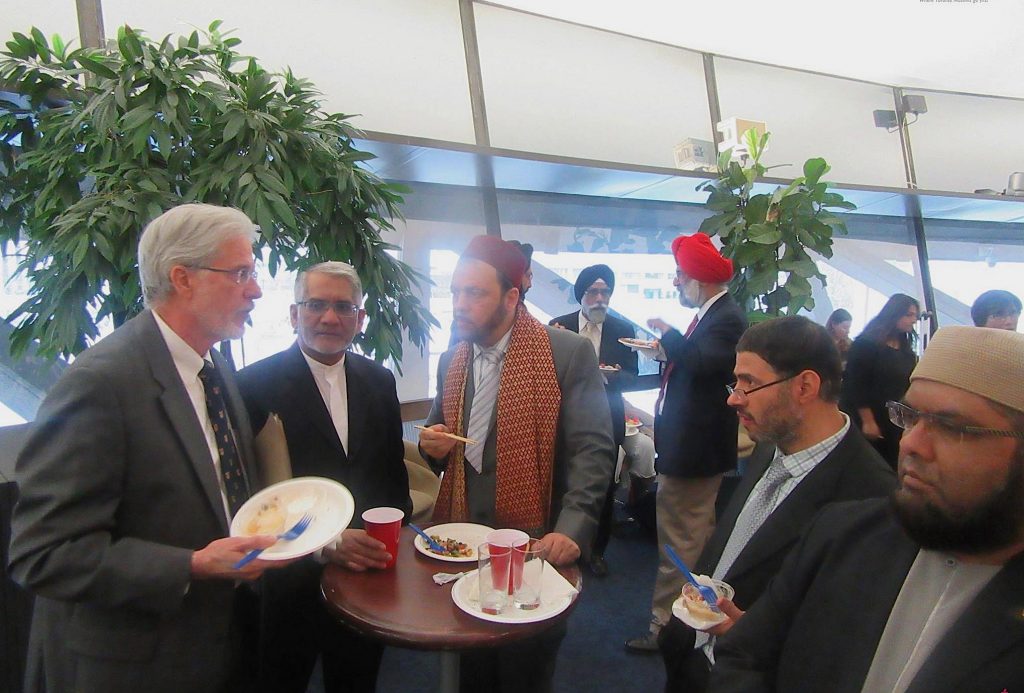