As homeless deaths continue to rise, faith leaders, front-line workers and advocates for the homeless gathered at Toronto City Hall to demand that Mayor Tory declare an emergency in our shelter system and open 1,000 new beds in over the next year, with 400 coming online immediately.

“This crisis has reached new heights. The City’s own shelter referral centre on Peter Street has hit near paralysis with 80 people sleeping there some nights, half of them sleeping in chairs, because the shelters are full,” stated Rafi Aaron, Spokesperson for the Interfaith Coalition to Fight Homelessness. “We need immediate action from our Mayor, or more people are going to die.”

Over 5,000 people are using Toronto’s shelter system every night, marking a disturbing increase of almost 20% in the last year.

The number of families with children seeking shelter has skyrocketed by 50%.

Shelters across the system are overflowing, and many of Toronto’s homeless are relying on drop-in centres and places of worship to stay safe and warm. Now those sites are filling up too.

“We are dangerously overwhelmed and at capacity in our 24/7 women’s drop-in,” said Myriam Frausto, a Community Support Worker with Sistering. “We are all obligated, and must commit, to open safe and secure shelter spaces for women and trans people to be out of harms way.”

The groups demanded that Mayor Tory declare an emergency in Toronto’s shelter system, thereby exercising his authority under the Toronto Municipal Code to direct City staff to open 400 additional shelter spaces for men and women, including trans-inclusive beds, by the end of 2017.

The groups also called on City Council to include opening 1,000 new shelter beds in the 2018 Budget and Shelter Infrastructure Plan to meet the maximum occupancy standards of 90% across all shelters.

“This City Council and our Mayor need to understand the severity of this crisis,” commented Councillor Kristyn Wong-Tam, who moved the motion asking the Mayor declare an emergency in Toronto’s shelter system. “If we don’t take action, more people will die.”

The event ended on a sobering note as the groups stood for a moment of silence and placed tombstones bearing names of people who’ve recently died on Toronto streets outside Mayor Tory’s office. 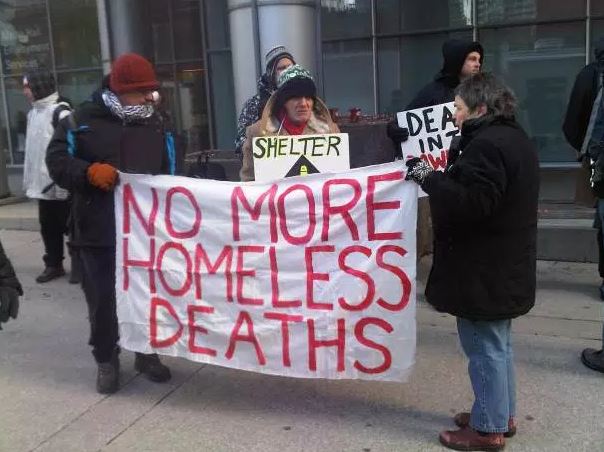