Canada’s Muslims are a great asset to the country, according to Prime Minister Justin Trudeau in his message to the Reviving the Islamic Spirit Convention.

“Canada is fortunate to have a vibrant Muslim Community in Canada,” said Prime Minister Trudeau in his special video message to the gathering. “Over the years, Muslim Canadians have thrived and greatly contributed to Canadian society, all the while maintaining important traditional connections to their homelands that have uniquely shaped the community’s rich cultural heritage.”

Muslims started arriving in Toronto from across North America and around the world on Friday for the annual convention being held at the Metro Toronto Convention Centre in the heart of the city’s downtown core.

Despite the snowy conditions in the city, thousands of people came out for the first day of the convention that is scheduled to run over the weekend.

“As we gather here this weekend, we celebrate and reflect on the diversity that is a source of strength for Canadians,” said Prime Minister Trudeau. “Our ethnic, religious and racial diversity is part of what makes us uniquely Canadian and allows us all to prosper in our open and inclusive society.” 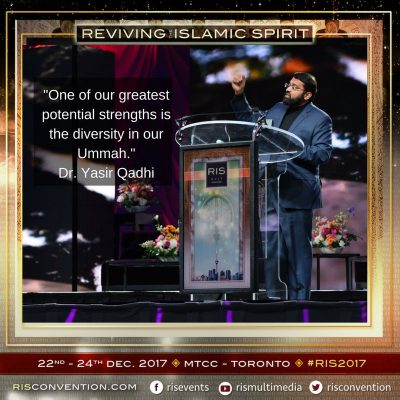 Themed  ‘Finding Stability in a World Out of Balance’, the convention began at noon with the weekly congregational prayers (Salaatul Jumuah) that included an English lecture delivered by eminent American Imam Zaid Shakir followed by the Arabic sermon (khutba) and prayer led by Maulana Tariq Jamil.

Maulana Tariq Jamil is a well-known Pakistani religious figure, preacher, and public speaker who is making his first appearance at the convention.

“We need to stop living our lives by materialistic, capitalist, patriarchal metrics that our society imposes on us,” said Imam Khalid Latif. “We need to talk with our black brothers and learn from their struggles against supremacy so we can enact change in our society today.”

In the evening session, Dr. Yasir Qadhi addressed the topic, ‘Looking ahead: Challenges and Opportunities in a Changing World,’ and he advised, “This religion teaches us that our goal is not this world, rather our goal is the akhirah.”

“We might not always see the fruits of our patience in this world but we will always be rewarded for it,” he added. “One of our greatest potential strengths is the diversity in our Ummah.”

“In this ever changing world, protect your family. After Allah SWT, it will be our family that will protect the faith of future generations.” 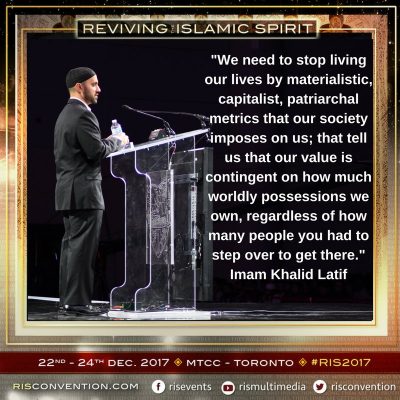 Organizers are expecting over 20,000 attendees to attend the convention.

Founded as a youth initiative over fifteen years ago, the convention strives to address issues pertinent to Western Muslims and inculcate a strong identity, which is centered on peaceful practice of faith and making positive contributions to society.