Malala Yousafzai, the inspirational Pakistani education activist and Nobel Peace Prize winner who survived a Taliban bullet in 2012, was granted honorary citizenship on Wednesday by the Canadian government.

Malala received the honour during a ceremony at the Canadian Parliament alongside Prime Minister Justin Trudeau and before an audience that included dignitaries, cabinet ministers, members of Parliament and diplomats.

Prime Minister Trudeau presented the activist with a framed certificate of citizenship, making her only the sixth person to receive the honour and the youngest ever.

In her address to the Canadian parliament, Malala condemned acts of terror perpetrated in the name of Islam, including the shooting on Parliament Hill that prevented her from receiving the honorary citizenship as scheduled in October 2014.

“The man who attacked Parliament Hill called himself a Muslim – but he did not share my faith. He did not share the faith of one and a half billion Muslims, living in peace around the world,” she said. “He did not share our Islam – a religion of learning, compassion and mercy.”

“I am a Muslim and I believe that when you pick up a gun in the name of Islam and kill innocent people, you are not a Muslim anymore,” Malala asserted. “He did not share my faith. Instead, he shared the hatred of the man who attacked the Quebec City mosque in January, killing six people while they were at prayer.”

“These men tried to divide us and destroy our democracies, our freedom of religion, our right to go to school.” 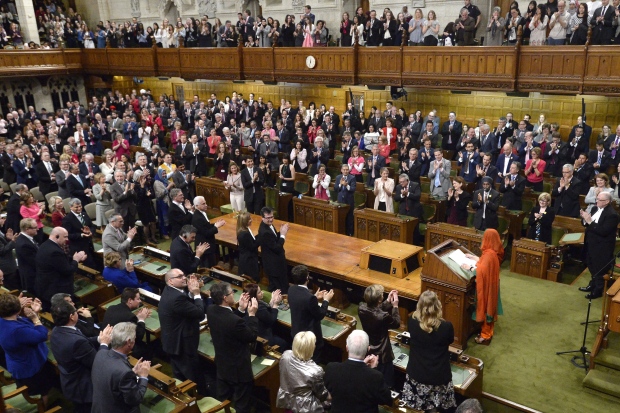 Message to Canada: ‘Dear Canada, I am asking you to lead once again’

Malala called upon Canada to “to lead again” and outlined various issues on which she said Canada could be a global leader.

“Dear Canada, I am asking you to lead once again: First, make girls’ education a central theme of your G7 Presidency next year. Second, use your influence to help fill the global education funding gap,” she told the audience on Parliament Hill. “You raised billions of dollars and saved lives when you hosted the Global Fund replenishment in Montreal last year. Show the same leadership for education.”

“Host the upcoming replenishment of the Global Partnership for Education, bring world leaders together and raise new funding for girls to go to school. If Canada leads, I know the world will follow,” she continued. “Finally, prioritize 12 years of school for refugees. Today only a quarter of refugee children get secondary education. We should not ask children who flee their homes to also give up their dreams. And we must recognize that young refugees are future leaders on whom we will all depend for peace.”

“The world needs leadership based on serving humanity – not based on how many weapons you have. Canada can take that lead,” she said. “Our world has many problems, but we don’t need to look far for the solution – we already have one.”

“She is living in a refugee camp in Jordan. She is walking five kilometres to school in Guatemala. She is sewing footballs to pay enrolment fees in India. She is every one of the girls out of school around the world today,” Malala noted. “We know what to do – but we must look inside ourselves for the will to keep our promises.” 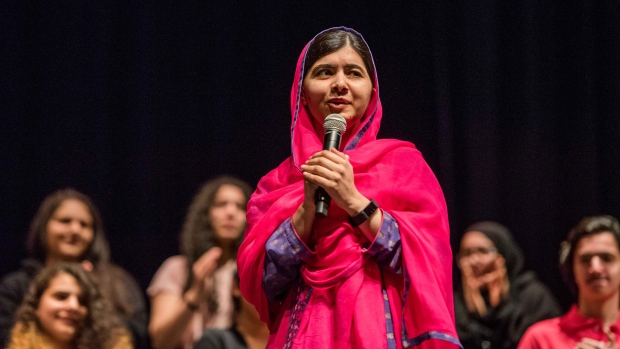 Message to students: ‘We have to challenge society’

Malala started off a busy day in the Canadian capital with a visit to Ottawa’s Ridgemont High School, where she delivered a strong message to the students.

She told the story of how when she was born, community members came not to congratulate her mother, but to tell her, “Don’t worry, next time you’ll have a son.”

“We have to challenge society, we have to challenge communities, we have to raise our voice,” she told the students. “And it’s true that they won’t listen to us, but if we keep on fighting, they will change. The same cousin who was laughing when my father wrote my name on the family tree, he now praises me, stands with me, and he now believes in education. So things will change. … We need to have passion to go forward and take the steps.”