National Indigenous Elders are calling on all Canadians to come together for a National Day of Prayer and Mindfulness on Sunday, August 6th.

“As the Elders and Knowledge Keepers of our First Nations, we have always relied on the Creator to guide us toward a peaceful, harmonious life, and a close and sacred relationship with the land,” stated the Elders in a statement. “As First Peoples of this country, we invite all citizens to come together for a National Day of Prayer and Mindfulness on August 6, to help us find resolve to some of the most pressing issues of our times.”

The National Day of Prayer and Mindfulness was initiated by Elder Dave Courchene from the Turtle Lodge in Manitoba, acting on behalf of the National Indigenous Elder Council from the four directions across Canada.

Elder Courchene has been designated to be the holder and caretaker of a special pipe commissioned by the Elders, that will be used for this prayer.

The Elders are now making a call for a National Day of Prayer and Mindfulness, “a national day that people of all religions, denominations and sects pray or meditate in their own way, in their own churches, mosques, synagogues, temples and lodges.”

According to the Elders, “the hope is that they stand with Indigenous people and call out in their own way for unity, understanding and a peaceful resolution of issues.” 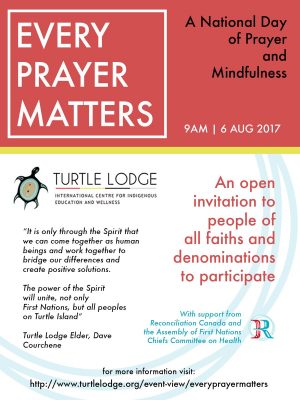 A resolution to hold the National Day of Prayer and Mindfulness on August 6th was passed unanimously at a recent meeting of the Assembly of First Nations Chiefs Committee on Health.

“The tone of the national conversation has become harsh and divisive. It is only through Spirit that we can come together as human beings and work together to bridge our differences and create positive solutions,” said Turtle Lodge Elder Dave Courchene. “The power of spirit will unite, not only First Nations, but everyone on Turtle Island.”

Elder Dave Courchene has sent invitations to Muslim religious leaders to join in the National Day of Prayer and Mindfulness.

“My hope is that the Muslim community will stand together with Indigenous people and call out to the Creator in your own way on August 6th for unity, understanding and a peaceful resolution of issues,” said Elder Courchene.

“In today’s reality, we struggle with a loss of humanity. We face so much violence and misunderstanding – over 2.9 million youth in this country are in a state of depression. Many contemplate suicide. Addiction has become a national issue. As the First Peoples we continue to find ourselves marginalized and in poverty. Other communities, including the Muslim community, also face marginalization. The world faces a nuclear showdown. Climate change is a critical issue, reflecting a loss of relationship with the Earth, which provides our home and everything we need to live,” added Elder Dave Courchene.

Grand Chief Patrick Madahbee says it’s important for Canadians and First Nations to come together in a spirit of harmony.

“It is crucial, if we are going to empower ourselves as Indigenous people, that we embrace and restore our identity and legal and spiritual systems,” Grand Chief Madahbee said. “Regional Chief Day is calling out to all First Nation territories to light sacred fires to symbolize and support the National Day of Prayer.

Assembly of First Regional Chief Isadore Day was strongly in support of the idea.

“Humanity is at a crossroads, with many pressing issues facing not only First Nation people, but all races, creeds, religions and genders,” Regional Chief Day said. “We must defer to our Elders and spiritual Knowledge Keepers for direction and support. Our survival as a human species relies on our willingness to seek wellness of the spiritual foundation of the human family. To that end, we support fully the National Day of Prayer.“