Chief Stacey Laforme of the Mississaugas of the New Credit First Nation (MNCFN) told the ISNA Canada Convention on Saturday that Canadians should celebrate the growing diversity in the country.

“Diversity is how we grow and become better than we were yesterday,” Chief Stacey Laforme told the gathering at the 43rd ISNA Canada Annual Convention. “I believe that the way to grow is to welcome diversity.”

“The world is in a difficult time and it needs us to stand together,” added LaForme. “It needs the citizens to say that we are the people of this land and we should decide on how this country moves forward.”

“If there are enough people standing together, we will change how people view this world.”

The ISNA Canada Annual Convention is being held over the weekend at the organization’s headquarters in Mississauga. 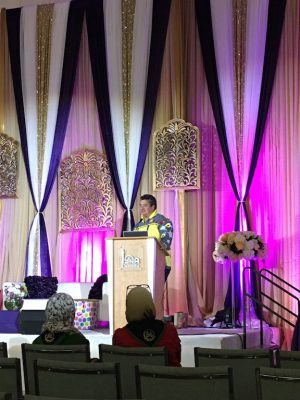 Stacey Laforme is the elected Chief of the Mississaugas of the New Credit First Nation (MNCFN). Born and raised on MNCFN, Chief Laforme has served his community for over fifteen years, being first elected to council in 1999.

Chief Laforme’s addressed a plenary session at the convention on the topic, ‘Building Relations and Treaty Obligations.’

“I would like to give thanks to the Creator, acknowledge the world around us and our place within it,” noted Chief LaForme. “I would also respectfully acknowledge Canada’s sesquicentennial and remind Canada that my people have called this land home for thousands of years and not to forget our voice during your 150.”

Chief Laforme is committed to increasing involvement and communication between Elected Council and both on and off-reserve membership.

He is very active throughout MNCFN’s traditional territory which encompasses 3.9 million acres of Southern Ontario, not only as a Chief, but as a notable storyteller and poet.

“The Mississaugas of the Anishinaabe were once a force within these lands and we will be again,” said Chief Laforme. “We are no longer content to be marginalized in our lands.”

Chief Stacey Laforme offered a prayer for the convention’s success.

“I would offer you this prayer for your annual gathering. We give thanks to the Creator for allowing this gathering. We ask You to guide us in this process and forgive us when we falter and disappoint for though we aspire to greatness we are after all only human. Grant us a clear mind, a pure heart and courage – a clear mind to make intelligent, well thought out decisions, a pure heart to make decisions that are without personal bias or desire and a courage to use both, a clear mind and pure heart in our lives. Let us set aside small differences, let us concentrate on the real issues, let us never be bogged down in rhetoric. Let us live our lives with a feeling of accomplishment and pride. Most importantly, let us remember that we are not adversaries nor are we enemies. We share a similar past, a kindred spirit and a common heritage. We must always remember the real reason that we are here – to do the right thing for our people, our children and our shared future.”