Toronto’s Muslims celebrated Eid al-Adha on Friday with a colorful display of the community’s diversity and compassion to the city’s special needs population at Woodbine Park.

“Our theme for our Eid celebrations is ‘diversity is our strength,’” said Akram Abdelrahman of the Muslim Association of Canada, Toronto chapter, which organized the large Eid gathering. “The multicultural essence of Islam is reflected in this Eid festival and the makeup of Canadian society. It is an opportunity for the wider community to observe and celebrate Eid with us.”

In an impressive display of unity, Muslims of all ethnicities dressed in traditional clothing flocked to the large open-air celebration at Woodbine Park to offer the prayers and take part in an all-day festival.

The 18th annual fundraiser for Epilepsy Toronto and BuskerFest 2017, the largest street-performers festival in North America, partnered with the Muslim Association of Canada (MAC) to host the large Eid celebration in the GTA.

In his sermon, well-known Canadian Imam, Dr. Abdullah Hakim Quick who is an international speaker, da’wah worker and historian, called on the gathering to recognize and celebrate the community’s diversity.

“This is one of the special days of Allah in which He has gathered us together in purity and peace – all nations, colors, languages, and cultures, ”said Dr. Abdullah Hakim.“

“Prophet Ibrahim was an Ummah or nation unto himself,” added Dr. Abdullah Hakim. “He was a role model for all nations and the founder of ‘Ummah Consciousness’.”

“’Ummah consciousness’ enables us to identify with all of the nations including the creatures of the earth and the environment,” he noted. “This enables us to be more aware of the great dangers that we face as a human race and as inhabitants on this planet.”

Dr. Abdullah Hakim in his eloquent and highly motivating address advised the audience to show respect for all people.

“O you who believe, we are not here by chance but by Divine design,” he said. “The First Nations populated these lands over 10, 000 years ago – it was called Kanata, the village, where all can make a home.”

“Now it is ‘Canada’ and we are blessed to come from many nations and be welcomed here to make it a home,” added Dr. Abdullah Hakim. “Respect to the Indigenous people and respect to all those who hold up the rights of all of the citizens of Canada.” 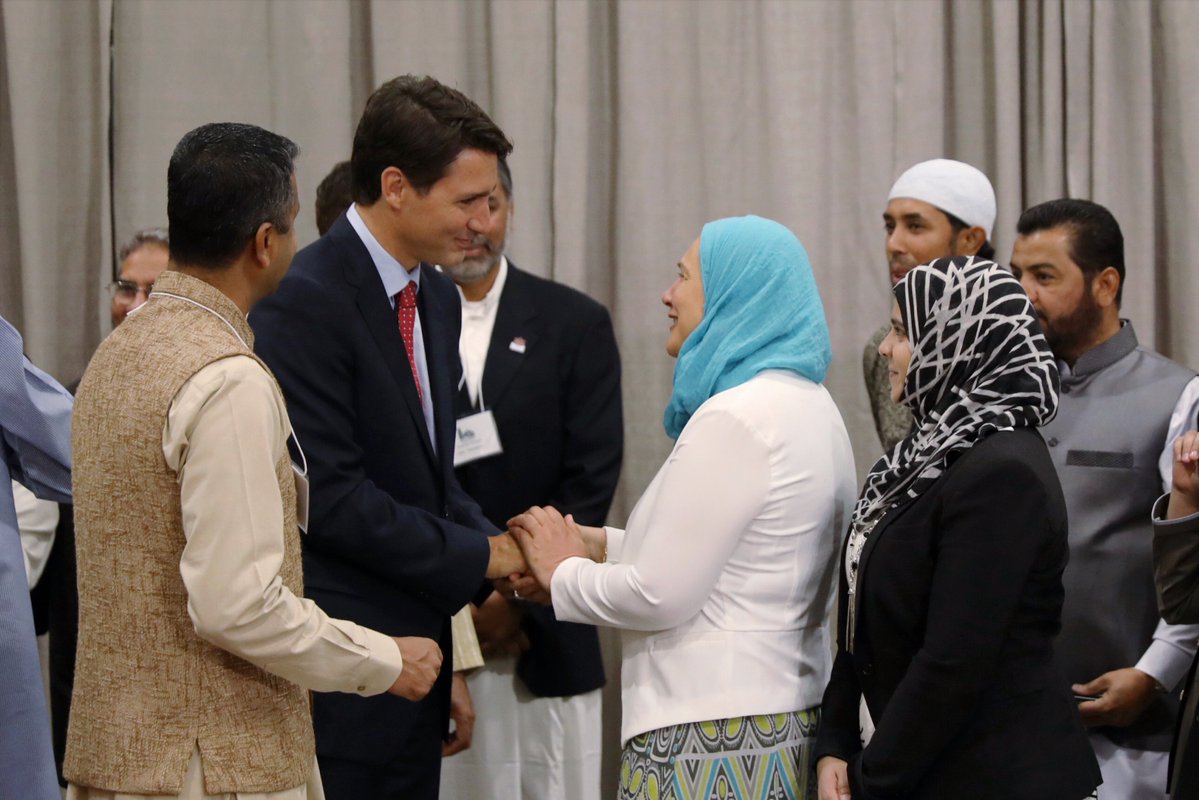 Meanwhile, Prime Minister Justin Trudeau joined Muslims in the city of Saskatoon to celebrate Eid and told the audience that Canadians must stand together against racism and Islamophobia.

“Whether we are in a big city or a small town, we must continue to stand together, united against racism, hatred and Islamophobia,” Trudeau told the crowd.

The National Council of Canadian Muslims (NCCM is also raising concern about rising attacks targeting Canadian Muslim communities, including the firebombing of a car belonging to president of the same Quebec mosque where six worshippers were killed and many gravely injured in a terrorist attack last January.

“Canadian Muslims are preparing to celebrate Eid al-Adha, one of two sacred Islamic holidays,” said NCCM Executive Director Ihsaan Gardee in a media statement released earlier in the week. “But news of hate incidents and attacks targeting Muslims continue to be reported across the country, putting a chill on what is meant to be a time of joy and celebration.

“We call on our elected representatives and law enforcement authorities to forcefully condemn all forms of hatred and racism, including Islamophobia, and to stand in solidarity with all targeted communities.”

According to news reports, the vehicle belonging to Mohamed Labidi, the president of the Quebec Islamic Cultural Centre, was torched just 36 hours after the local Muslim community and Quebec City mayor Régis Labeaume announced the purchase of city-owned land for a cemetery on August 6.

“This attack is deeply disturbing, particularly as it happened just hours after news that the Quebec City Muslim community had finally acquired land for a cemetery where they could bury their deceased loved ones,” said NCCM Communications Director Amira Elghawaby.

According to the NCCM, more anti-Muslim hate incidents have been reported in the month of August in Canada than any other month so far in 2017.  Incidents include death threats, acts of vandalism, and harassment.

“It’s clearly time for all levels of government to immediately address the phenomenon of growing far-right and white supremacist extremism,” added Elghawaby.

“As we mark the end of the Hajj with celebration, Canadian Muslims know that these cowardly acts of hate do not represent the views of the vast majority of fellow Canadians,” said NCCM Executive Director Ihsaan Gardee. “It’s unfortunate that a minority of misguided individuals seek to divide our society.  They will not succeed.”