Muslims attending Friday prayer services at Toronto’s busiest mosque were greeted today by protestors carrying banners and with loudspeakers, shouting Islamophobic slogans and calling for a ban of Islam.

The group called Canadians Against Islamization carried banners and signs with Islamophobic messages outside the mosque, Masjid Toronto.

In February 2014, Brazau was convicted of willfully promoting hatred against Muslims and criminally harassing a Muslim man and his family. 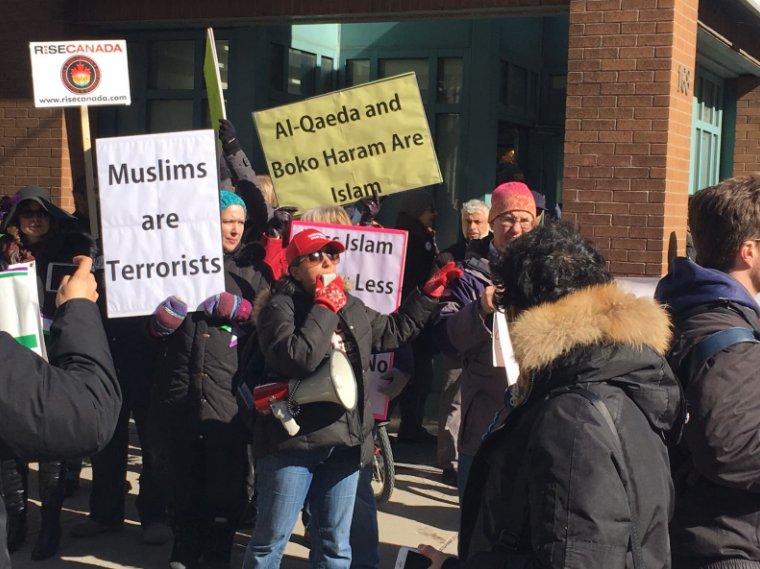 People responded quickly on social media denouncing the protesters and Toronto politicians took to Twitter to express their outrage.

“Islamophobia has NO place in our city. I’ve visited Masjid Toronto many times & denounce all acts of hatred towards our Muslim citizens,” tweeted Toronto Mayor John Tory.

After seeing pictures of the protest on social media, a group of counter-protesters showed up outside of the mosques, Masjid Toronto at Dundas and Masjid Toronto at Adelaide, with last-minute signs in support of Muslims. 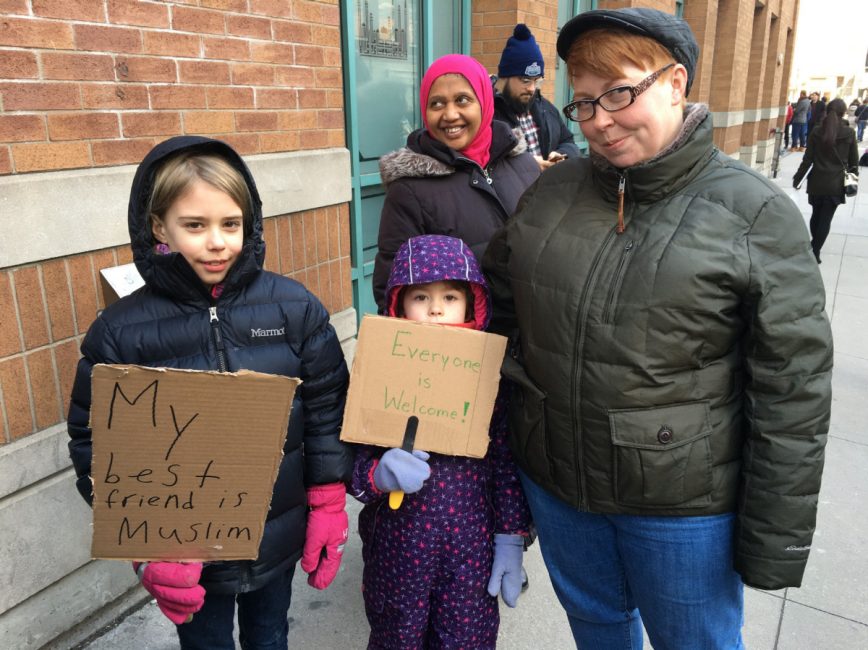 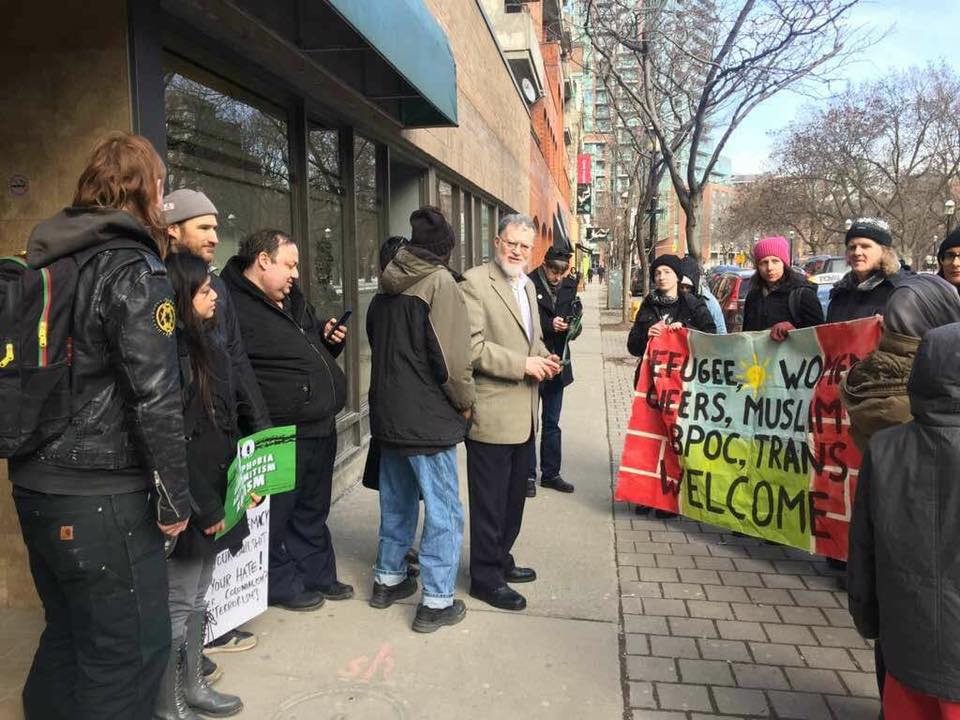 But before any of them arrived, the protest had disbanded.

Councillor Joe Cressy was among those who showed up.

“I got a text message so I just ran over,” said Cressy, who joined group of about 20 people.

“We stood there to welcome the individuals who were leaving the mosque.” 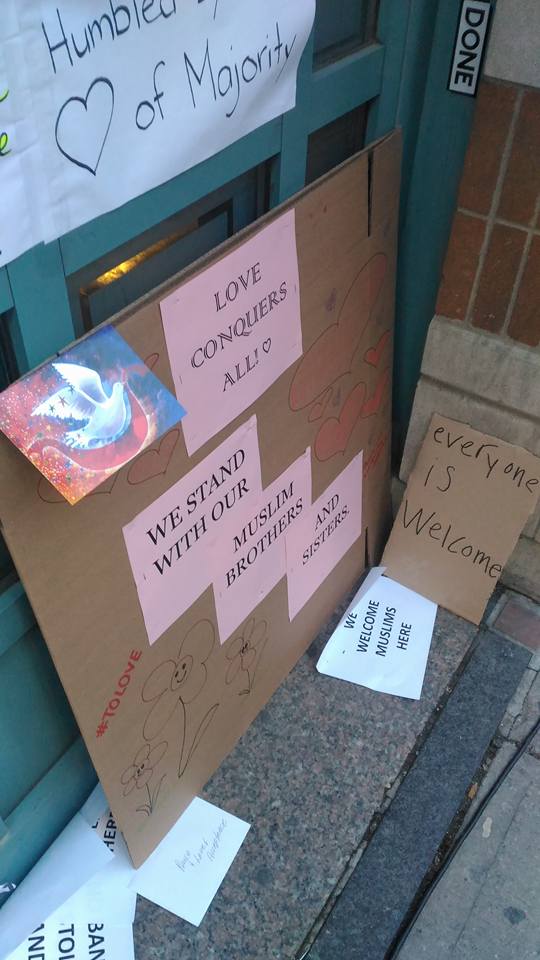 “Awful protest at Masjid Toronto today; has moved to mosque at Church/Adelaide. No place for Islamophobia in TO,” tweeted Councillor Kristyn Wong-Tam.

“In wake of murder of 6 in Quebec we must reject fear and ignorance and stand by Muslim sisters and brothers.”

Muslims attending the prayer services thanked the counter-protesters for showing up to support the mosque.

“There’s always going to be the sort of people who are pressing buttons of division everywhere and my understanding of the protest is it was a handful of people, not thousands. So for us to expect that such people are not around and such people don’t exist is unrealistic,” Abdul-Basit Khan, who attends the Masjid Toronto mosque and is a former member of the mosques executive committee told the Toronto Star.

“The first protest was probably planned and organized. You don’t have people naturally coming to a mosque and saying bad things about its attendees and their faith. But the counter-protest, it was spontaneous. That’s more telling,” Khan said.

Khan also said be believes there’s “no better place to be a Canadian Muslim than in the GTA.”

In an email, Toronto police Const. Jenniferjit Sidhu said police will investigate any possible hate crimes if an official complaint is reported.

“No Canadian should feel intimidated when walking into their synagogue, church, temple or mosque. We are thankful to our fellow Canadians who joined with us today against this attack on religious freedom and Canadian values,” said Masjid Toronto in a statement.  “The safety and security of our worshippers is paramount. We thank Toronto Police Services for their on-going support and their swift attention.”

“We also thank our fellow Torontonians and Canadians who have expressed their support.”

The mosque is holding an open house next Saturday, February 25. 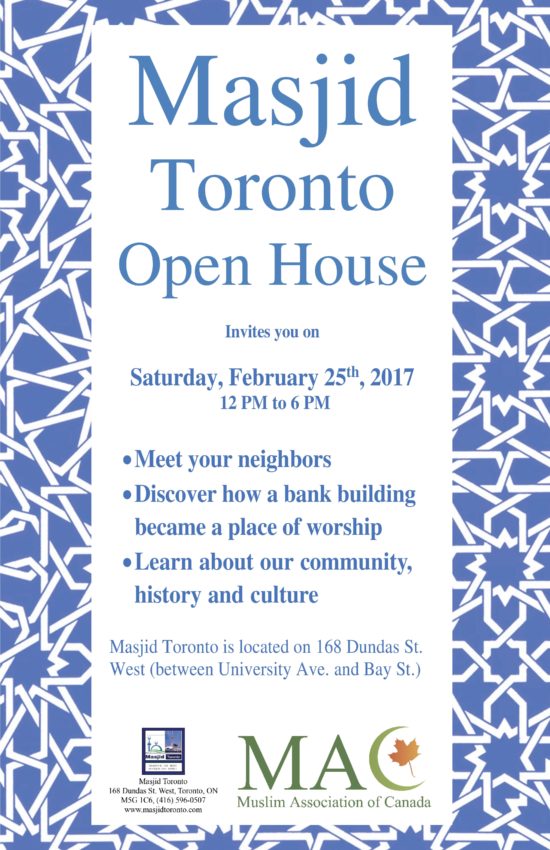