Fauzia Mazhar is passionate about dispelling the stereotypical image of Muslim women prevalent in society and hopes the annual event she helps to organize in Kitchener will challenge these myths.

“Since 2011, the Coalition of Muslim Women of Kitchener-Waterloo has presented a community outreach event on the first weekend of June with the aim to build bridges of understanding with the larger community through art, entertainment and dialogue,” Mazhar, Chair of the Coalition, told the audience at the event held at Kitchener City Hall on Saturday, June 4 2016.

‘Meet The Men Who Stand Beside Us!’ was the theme of the 6th Annual Community Outreach event organized by the Coalition of Muslim Women of Kitchener-Waterloo.

“We hope that an increased understanding of the heterogeneity and complexity that defines the Canadian Muslim women will take away the one-dimensional stereotypical image of Muslim women so prevalent in our society.”

“I personally felt a bit disappointed when I started to see comments such as ‘where are the men’ or ‘bring imams and scholars’ on our feedback forms from previous events,” said Fauzia Mazhar. “I felt disappointed because these comments challenged some of our core beliefs guiding our work, including that the general public wants to hear from Muslim women about their lives, not men.”

“However, over time, we started to develop a better understanding of the importance of engaging and integrating Muslim men into these public dialogue opportunities,” she added. “Also, more on a personal level, we always felt personally hurt by the one-dimensional stereotypical image of Muslim men in our society, again simply because that’s not how we experienced the men in our lives.”

“Whenever we discussed the role of men in our lives, we found that in one way or the other, we traced back our personal successes and achievements to the very powerful role of a loving father who believed in us and encouraged us, and supported us to be whatever we wanted to be, sometimes to the extent of defying societal norms,” noted Mazhar. “Many of us also freely talked about the positive role of our husbands in their lives.”

“And it does not take us long to realize that above all, there is one man that we all hold in the greatest respect and love and see as the best role model for both men and women – this man is none other than Prophet Muhammad (may peace and blessings be upon him).”

Muneeb Nasir explained that the religion of Islam teaches that men and women are created from a single soul.

“When one is supported and accompanied by women on life’s journey as partners – one is able to move beyond the role-based understanding of gender and to understand that we are all created from the same essential essence,” noted Nasir. “We all, males and females, share a common humanity.”

Following the imams’ presentations, there was a lively question-and-answer period with the audience.

World-renowned singer-songwriter, Dawud Wharnsby, entertained the gathering with his heartwarming tunes and then the public was invited to enjoy treats and conversation with local Muslim women and the men who stand beside them at the captivating Table Talks section of the program.

“These distinct stories are coming from their hearts,” Fauzia Mazhar told participants in the Table Talks. “I applaud my sisters and brothers who have courageously put themselves in this public role and are willing to share their very personal stories in the hope that this action will promote an understanding of Muslim women and the role of male allies in their lives.”

In the public square outside the city hall, a dazzling multicultural bazaar was held that included the Funtastic KidsZone, henna, calligraphy, international food, art displays, and a popular “Try on a hijab” booth.

Fauzia Mazhar says that the Coalition of Muslim Women hope to strengthen and support the voices of Muslim women in the Kitchener-Waterloo area.

“Today, we are a formal group of over 40 highly passionate local women who believe in creating a just and harmonious community where Muslim women are valued and admired for who they are and have the training and opportunities to engage as leaders, movers and shakers, both in the Muslim and the larger communities.” 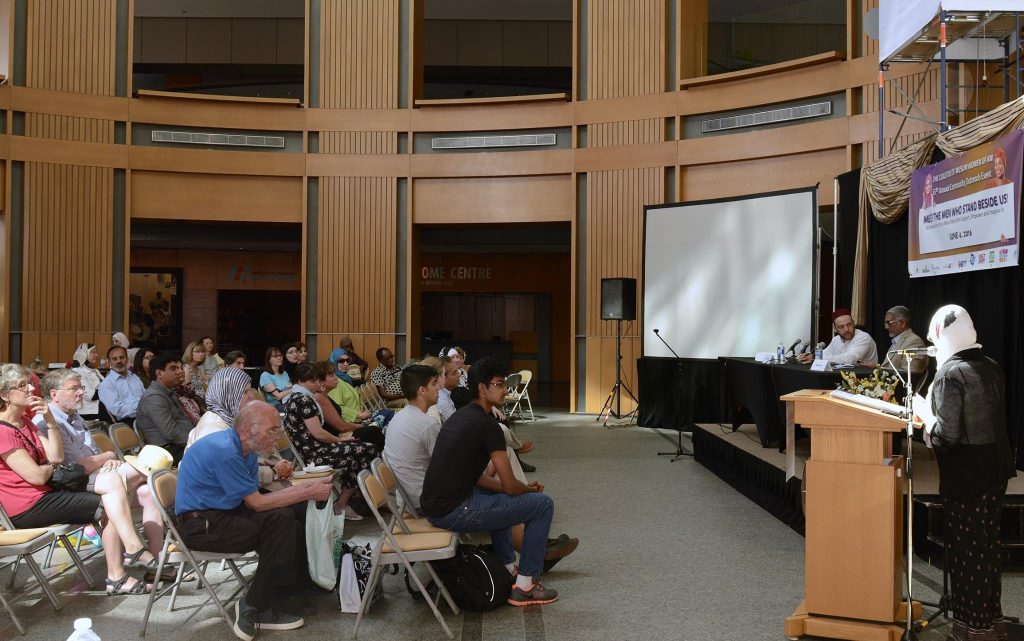 Kitchener-Waterloo is a metropolitan area in the south-central portion of the province of Ontario. 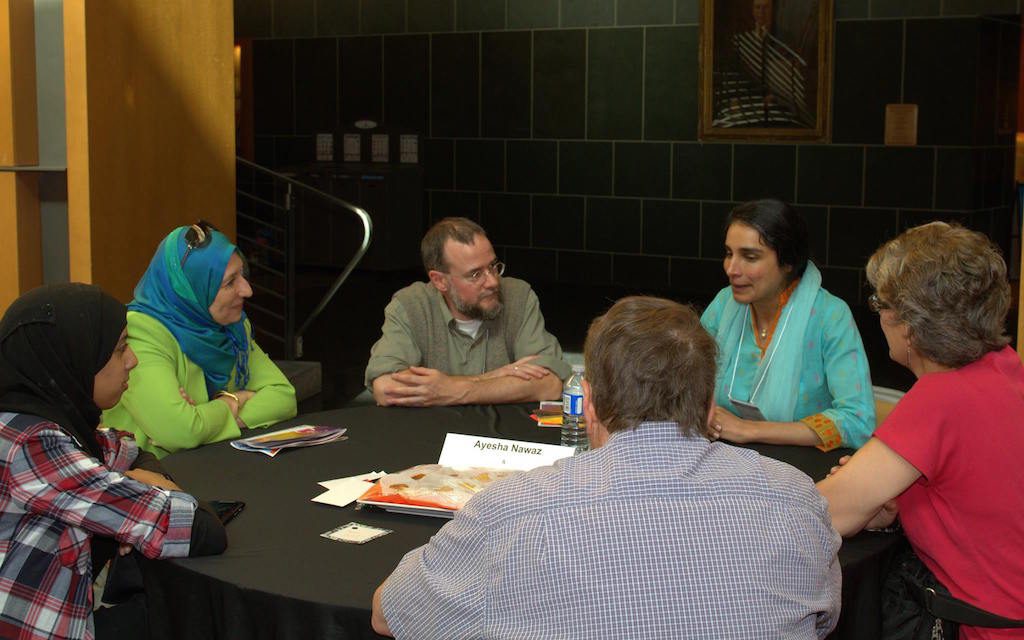 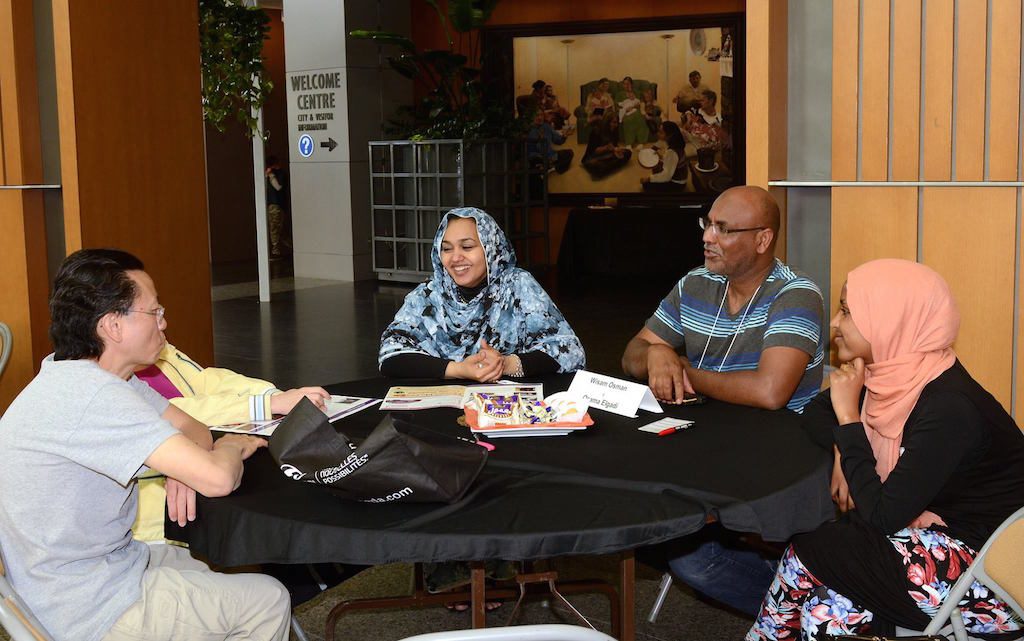 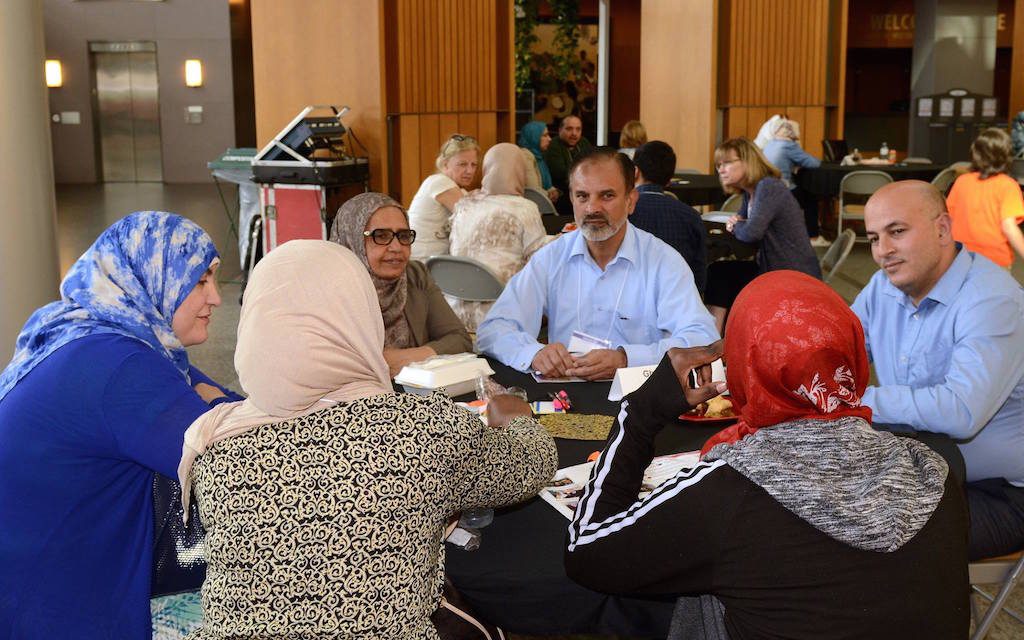 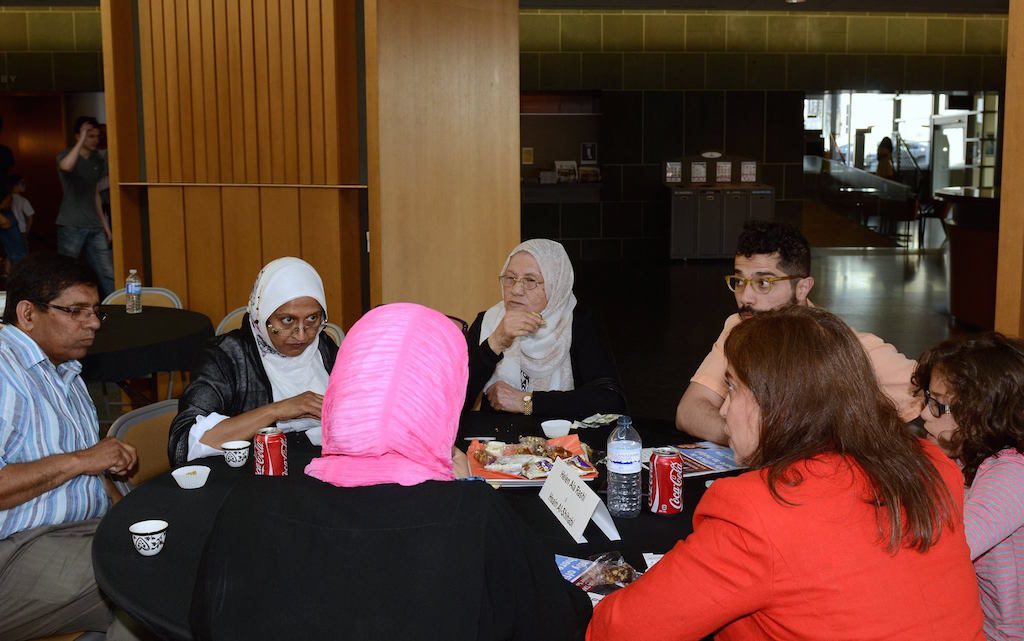 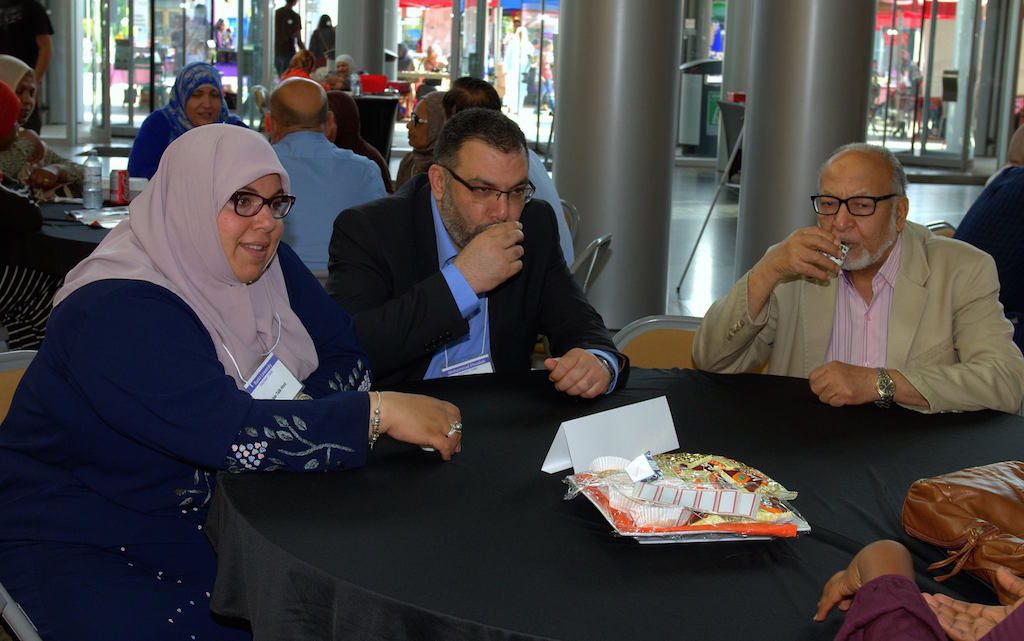 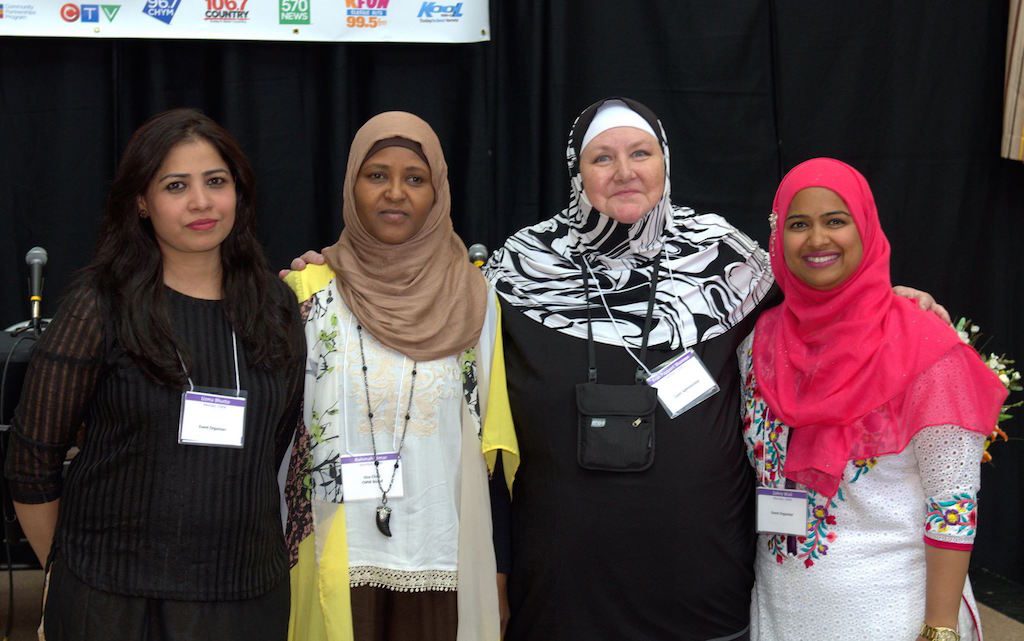 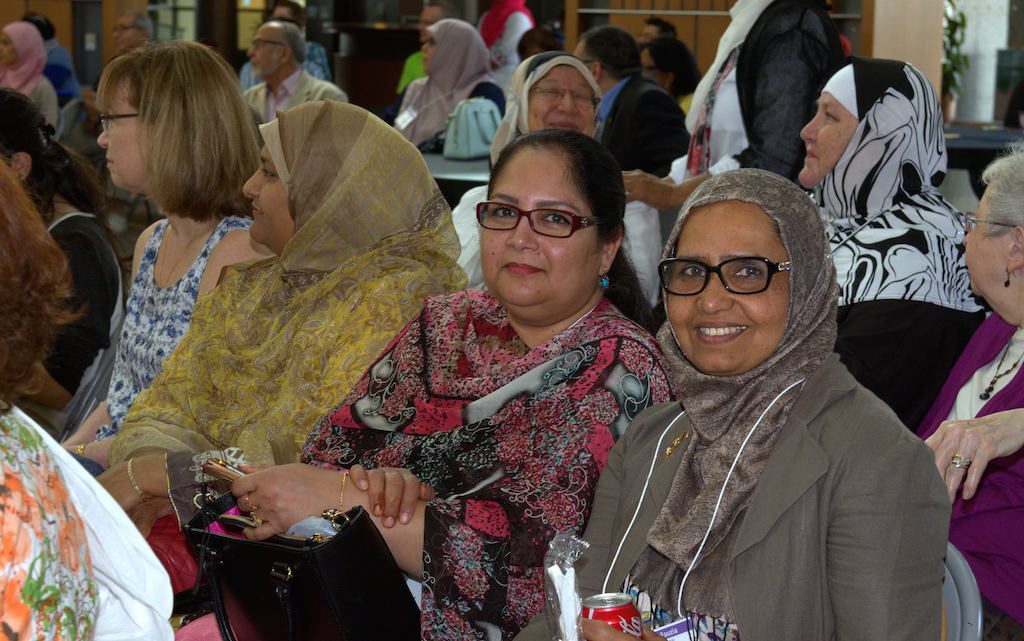 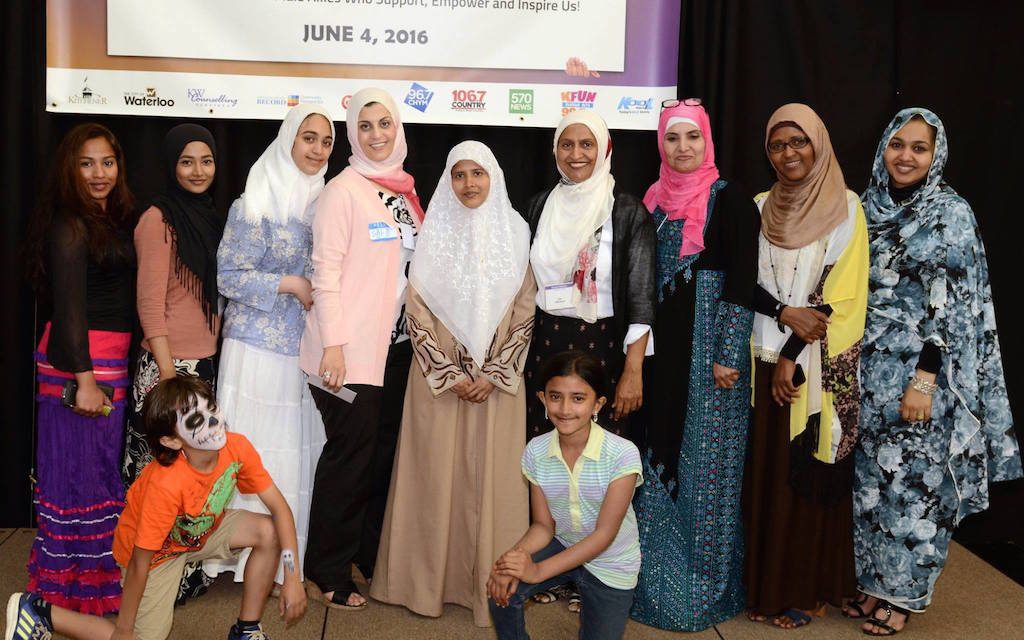 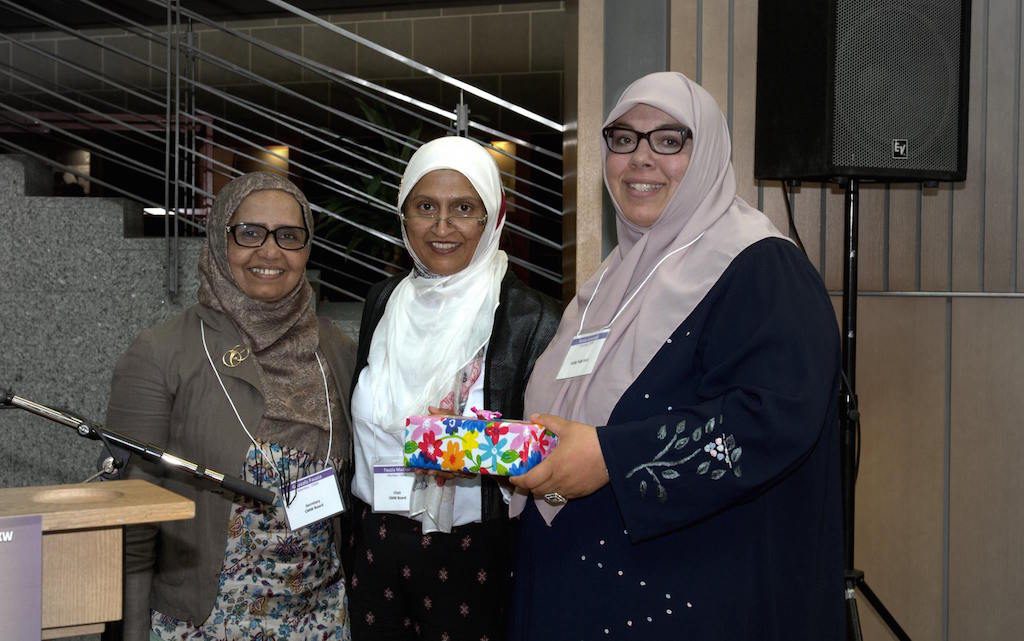