A town hall to discuss recent hate incidents and hate crimes in Canada was held in Richmond Hill on Tuesday evening.

“The purpose of the town hall is to discuss what has been happening locally since the US election, what we should be doing to keep ourselves safe and how we can work with the authorities and Government to be peaceful citizens but still have our voice heard and rights protected,” said Saud Juman, the organizer of the event. 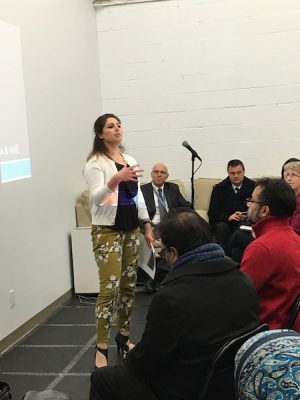 Sabreena Siddiqui told the audience that there is an underreporting of hate incidents by Muslims.

“Allow yourselves as immigrants, as people of colour, as Muslims, the permission to complain if an injustice is being done,” Siddiqui advised the audience. “But you should recognize and tackle the inequalities in your communities.

There are a growing number of Islamophobic and hate incidents, according to NCCM’s Abbas Kassam.

“Islamophobia is close-minded prejudice against or hatred of Islam and Muslims,” said Kassam.

“We are concerned Canadians who want us all to experience the peace and safety that are hallmarks of our amazing country,” noted Saud Juman.

“Markham is one of the most diverse cities,” added Mark Topping of York Region Police’s Central Hate Crime Unit. “If you look at how we live together, it is remarkable.”