Citius. Altius. Fortius. Can’t go wrong with the Olympic motto of striving to be faster, higher and stronger. Unfortunately, international sporting events also have an ugly side, one too often hidden using repression and public relations budgets.

Years ago on a visit to India, I came face to face with this side. As I stepped out of the Mumbai airport, a man offered to push my cart. Having come prepared with change to pay the unofficial porters eking out a living, I obliged. Within seconds, a cop grabbed him, tore off his shirt and began to beat him with his lathi. As I looked on in shock, the man escaped. The cop then calmly told me that it was illegal for him to push my cart, but apparently not to batter him!

I walked away feeling queasy when a scrawny kid (about 10-years-old) in torn khakis offered to push my luggage. I gave him some cash and tried to shoo him away. He insisted on helping. Not proficient in Hindi, I asked a family member to tell him to scoot before he, too, was beaten.

As he walked away, a man grabbed him, took his money and began to slap him around. When I yelled at him to stop, he retorted that the kid was a chor (thief). I said he was the chor. I marched over and when he refused to release the boy, I pushed him. As the man fell backwards, I expected to be jumped by his Goonda friends. The child took off.

As airport officials arrived, the man picked himself up, gave me stern look and flashed his police ID. Speaking out of anger, I told him I didn’t care if he was the prime minister, he shouldn’t treat a child as he did. As the cop brushed himself off, he appeared to be assessing me. Was I just a crazy tourist or someone too well connected to mess with? Thankfully, he concluded the latter and only gave me a searing final stare as he walked away.

I learned later that the two beatings were part of the city’s mission to “clean up the eyesores” before a major global sporting event. Some of the slums had been bulldozed and their inhabitants uprooted. All was fair to ensure the elites, foreigners and the international media got great photos and had a great time.

Indeed, irrespective of the country, the disenfranchised pay the heaviest price when a nation decides to host such events.

Forced displacements (rights groups say 4,000 families in Rio alone), evictions, forced and child labour, violent repression, disappearances, restrictions on free speech, etc. are just some of what the voiceless must put up with. It only varies in degree.

Brazil came under criticism for both the 2014 World Cup and the Olympics this summer. Critics claim that the $10 to $12 billion could have been better utilized on housing, education, health and sanitation.

“Governments who bid to host are not being held to their pledges,” says Minky Worden of Human Rights Watch (HRW). Tokyo, which provided assurances to end abuse of foreign labourers and about victims of the 2011 nuclear disaster (both not going as planned), will host the 2020 Summer Games. In 2022, Beijing will become the first city ever to host both Winter and Summer Games. HRW says the 2008 Summer Games was a “catalyst for human rights abuses.” The rights record for the 2014 Winter Games in Sochi, Russia was not much better.

Rights groups estimate more than a 1,000 migrant workers have died since Qatar was awarded the 2022 World Cup. Thousands more are expected to perish before the opening ceremonies. Amnesty documents much more in its March 2016 report titled The Ugly Side of the Beautiful Game.

Paris is the favourite to win the 2024 summer games even as France comes under increasing scrutiny for violating religious rights, enacting draconian anti-terror laws, including severe restrictions on speech.

But major sporting events also provide opportunities to push for change. In fact, the international football players union, trade unionists and rights groups have been championing change for some time. The IOC, FIFA and the other governing bodies should pay heed to their calls to ensure that human rights and anti-corruption measures are taken into account in awarding events.

Unless human rights are prioritized and there is follow through with consequences, there is a serious risk that the more accurate motto may be: Poorer. Weaker. Quieter.

[This Op-ed was originally published in The Toronto Star on Sunday, August 28, 2016] 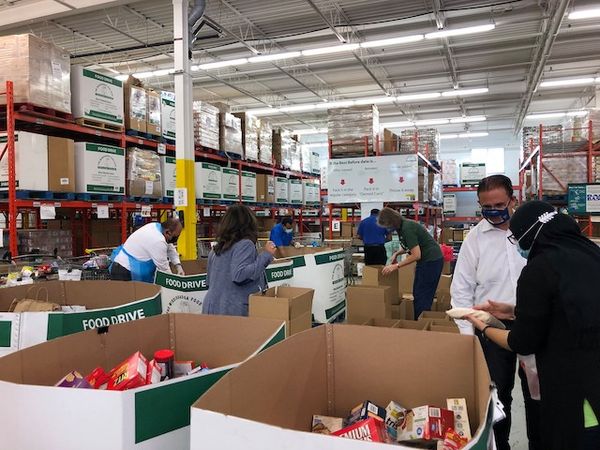 Who is hungry in your neighbourhood? You can now find out with the Hunger in My Riding  tool recently unveiled by Feed Ontario. The interactive tool allows users to generate custom reports on the impact of hunger in their provincial riding. Reports include statistics on food bank use, social assistance,