Last Saturday, November 26 a forum titled, ‘Muslims in solidarity with Standing Rock’ was held in Toronto at the Workers Action Centre.

“Now more than ever, we must take the opportunity to bring Muslims together to learn about the issues faced by indigenous communities in North America, and talk about what solidarity could look like,” noted the organizers on the event Facebook listing.

The forum’s featured speaker was Prof. Bob Lovelace, a teacher of Indigenous Studies at Queen’s University in Kingston, Ontario and former chief of the Ardoch Algonquin Nation. Other speakers were Mohammed Abdou and Phyllis Mckenna.

Lovelace was involved in the resistance to the confiscation of traditional wild rice fields on his traditional lands and, in 2007, he was sentenced to six months in prison and fined $25,000 for declaring intention to protect Ardoch Algonquin territory from uranium mining.

He spoke of the need for healing and recovery for First Nations and the many forms of control that successive governments have used to control indigenous peoples. 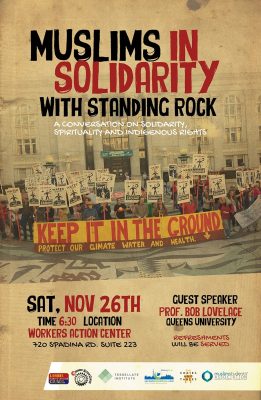 Lovelace urged attendees to look past the barricades and see our children and our environment as ‘the valued things that we must struggle for.’

The organizers of Saturday’s event said that, “South of the border, First Nations communities in North Dakota are engaged in a struggle over the right to clean water and respect for sacred native land.”

“The local Standing Rock Sioux tribe and thousands of supporters from across North America have set up camps in Cannon Ball to try and block the construction of the Dakota Access pipeline (DPL) which threatens sacred native lands and could contaminate their water supply from the Missouri river, which is the longest river in North America.”

They noted that the forum was meant to be a teach-in for Muslims about indigenous traditions and struggles.