Mississauga Clock Tower was lit up green on the evening of Tuesday, October 25 to mark Islamic History Month.

“I went before Mississauga’s City Council on October 12 for a deputation to have the Clock Tower and Celebration Square lit up green in recognition of Islamic History Month,” Sandra Noe, Chair of the Federation of Muslim Women and a member of the Islamic History Month Canada committee, told IQRA.ca.

“The motion before City Council was passed unanimously and the Clock Tower and Mississauga Celebration Square was lit up green in recognition of Islamic History Month on October 25.”

A group of Mississauga citizens gathered that evening to share stories and history about Islam.

“We are community builders. We have left our mark in aspects of civilization – sciences, mathematics, art, architecture, literature and education to name a few. We have a very long and rich history to be proud of,” added Sandra Noe. 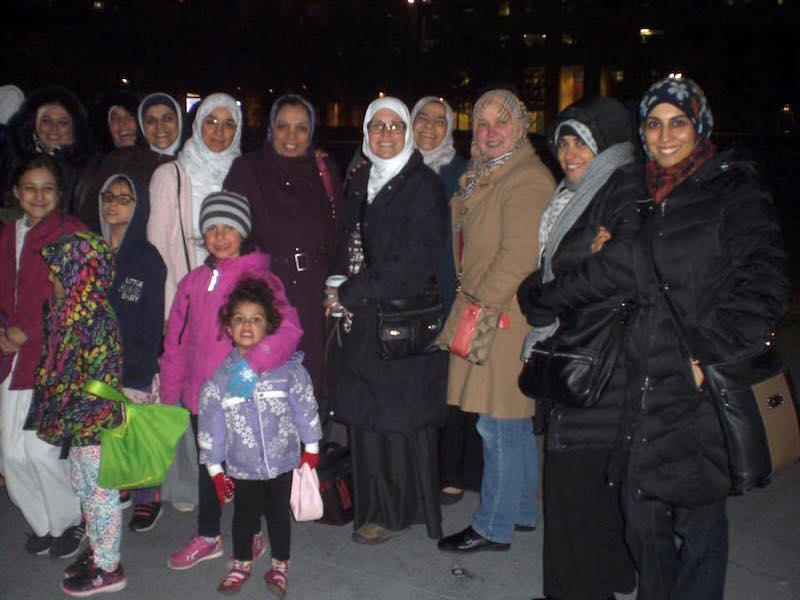 Islamic History Month Canada (IHMC) aims to celebrate, inform, educate, and share with Canadians the rich Muslim heritage and contributions to society – in sciences, humanities, medicine, astronomy, and other disciplines that have greatly benefited human progress.

Bridge-building with understanding is one of the goals of IHMC.

This year’s theme for IHMC is ‘Muslim Contributions – Enriching Canada’ and the organizers believe that through education and sharing positive stories, all Canadians can grow and connect in the best way possible.

Previous IHMC themes have included Islamic Art and Architecture; Islamic Banking and Finance; Irrigation and Water systems; Medicine and Pharmacology; and Islam and the Environment.

The month provides a time to focus on celebrating and educating the Muslim and non-Muslim community on the rich history, heritage and culture of Canadian Muslims and Muslims around the world.

A number of cities across Canada have been proclaimed October as Islamic History Month.

Mississauga is the sixth largest city in Canada and situated in Southern Ontario, located in the Regional Municipality of Peel.

It is in the central part of the Greater Toronto Area, to the west of Toronto.

Mississauga Celebration Square hosts multicultural festivals and has a skating rink in winter.