The “Eureka” moment came when I was putting away my coffee cup at work one Ramadan, joking with a colleague that fasting is so great, it saves money.

Ramadan does save people money because they aren’t eating during the day.

Since a key part of Ramadan is learning about hunger and having empathy for (and helping) those in need, it seemed a perfect way to raise money to fight hunger.

Importantly, because that spirit of Ramadan is pretty much universal I wanted the initiative to be open to everyone regardless of faith or background.

The idea is simple:

You’ll be amazed at the impact a small behavioural change can have when everyone joins in.

How You Can Help 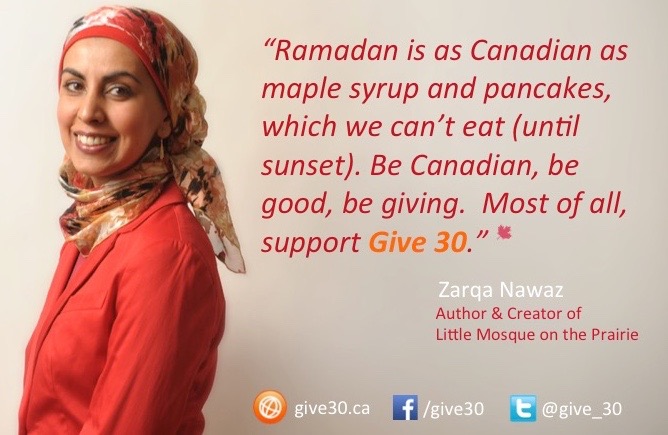 How Give 30 Has Done So Far

Give 30 has raised almost $400,000 across Canada since inception.  Here’s a snapshot of the last 4 campaigns:

Give 30 is now a truly national campaign, spanning 6 provinces, 4 time zones and 10 of the most populous regions/cities in Canada.  Our 11 food bank partners are some of the largest food banks in Canada, serving tens of thousands of people in neighbourhoods across this amazing giant country.

As an added bonus, Give 30 has generated inspiring stories of compassion across country.  Several generous donors have made $30,000, $10,000 and $5,000 gifts, and young Simon of Toronto who became a Give 30 Ambassador in 2013 (at age 8) continues to set a fine example by donating and being a Give 30 Ambassador.  Last year we launched with an amazing donation from a diverse group of men at the Joyceville Minimum Security Correctional Facility in Ontario who raised $1,400 for Give 30.  This is the Give 30 spirit in action.

This year we kick off Give 30 nationwide with these great events:

If you want to get a sense of Give 30 across country check out this great story in the Toronto Star: Toronto Star Give 30 2014.  New media coverage will be shared on social media and posted to the News page of the Give 30 site where you can also look at previous coverage.

Every Gift Makes a Difference

Consider that the average food bank client has, after housing costs, about $5 a day for all their needs (including food, transit etc.).  I’ve spent more than that on a fancy coffee and a cookie some days.  I’m not asking anyone to completely give up their small pleasures in life.  All I am asking is that we be deliberate in our choices and mindful of how our neighbours live, what challenges they face, and put even our small pleasures in context.

Despite living in one of the wealthiest societies on the planet, we still have people in this country who go to bed hungry.  Canada does not have a food scarcity problem, but a problem of economics, social supports and distribution of wealth.  That’s why almost 900,000 people use food banks each month in Canada, and one third of those people are children.  We can do much better, and you can help.

Hunger knows no race, religion, ethnicity, creed, gender or age and that’s why it’s important for everyone to join Give 30.