The City of Windsor, Ontario unveiled a monument in Jackson Park on Saturday, July 9 to remember the lives lost during the Bosnian genocide.

Local dignitaries and members of the Bosnian Canadian community were in attendance.

The Bosnian massacre took place in July 1995 and during that time more than 8,000 Muslims lost their lives.

Many people across the world are also taking a moment to remember the tragedy that took place 21 years ago.

Brian Masse, NDP Member of Parliament for Windsor West, tabled motions in the Canadian Federal Parliament in 2010 and 2015 that unanimously passed acknowledging the genocide that the Serbian forces perpetrated in Srebrenica in July 1995.

“I am pleased to be here for a historic moment, the remembrance of Srebrenica,” said MP Brian Masse. “It is not something for only the Bosnian and European nations to think about but also places like Canada.”

“I am proud that our community and the greater Bosnian community and others across this country have united in the interest of making sure that this genocide is recognized and healing can continue to take place,” he added. 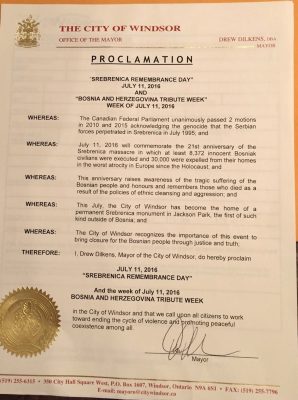 The City of Windsor issued a proclamation that July 11, 2016 will be “Srebrenica Remembrance Day” and the week of July 11 will be commemorated as “Bosnia And Herzegovina Tribute Week.”

“July 11, 2016 will commemorate the 21st anniversary of the Srebrenica massacre in which at least 8,372 innocent Bosniak civilians were executed and 30,000 were expelled from their homes in the worst atrocity in Europe since the Holocaust,” states the proclamation.

“This anniversary raises awareness of the tragic suffering of the Bosnian people and honours and remembers those who died as a result of the policies of ethnic cleansing and aggression.”

“This July, the City of Windsor has become the home of a permanent Srebrenica monument in Jackson Park, the first of such kind outside of Bosnia,” the statement affirms.

“The City of Windsor recognizes the importance of this event to bring closure for the Bosnian people through justice and truth.”