Canadian Muslim millennials are more religious that other Canadian youth and also the most observant generation in the Muslim community, according to the new national survey conducted by Environics Institute and released on April 27.

The youth, ages 18 to 34 years, are most likely to visit mosques for prayer on a regular basis, wear the hijab, and support the right to pray in schools.

These are the findings of the survey conducted between November 2015 and January 2016. It is a follow-up to the first-ever national survey of the country’s Muslim population conducted by the Environics Institute in 2006.

The results show that Muslims as a whole are embracing Canada’s diversity, democracy and freedoms, and feeling more positive about the country than a decade ago. This is despite continuing to experience discrimination due to religion and ethnicity, well above levels experienced by the Canadian population at-large. 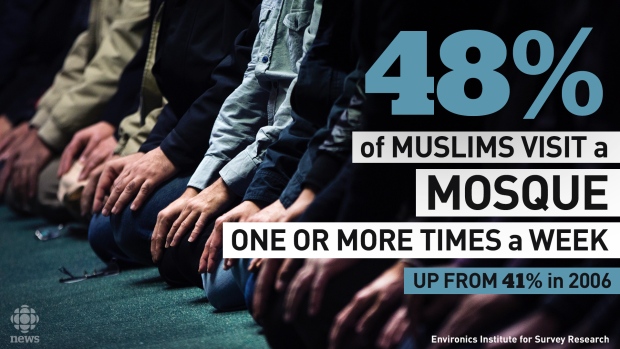 Overall, more Muslims are attending mosques than 10 years ago when a similar survey was conducted.

Close to half, 48% of Muslims surveyed, report they attend a mosque at least once a week and another 17% visit a mosque more occasionally, while 24% say they attend only at special times of the year.

Immigrants from Pakistan and those who identify most strongly as Muslim visit the more mosque frequently for prayers.

Frequent attendance for non-prayer purposes is most widely reported by Muslims in western Canada, Muslims under 45 years of age, and those born in Pakistan. 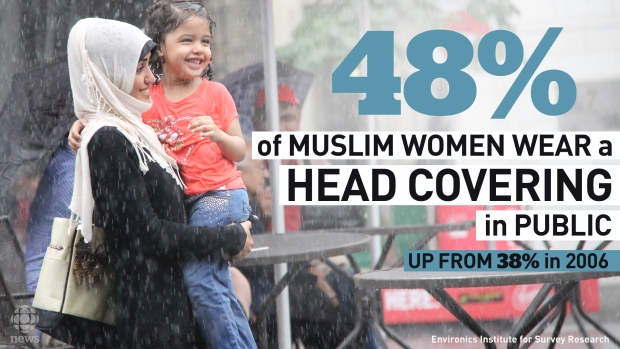 More young Muslim women are also wearing the hijab. The practice has grown across the population, but most noticeably among women 18 to 34 where it is now most prevalent.

More than half, 53% of Muslim women surveyed say they wear a hijab, chador or niqab in public. The majority, 48% wear the hijab with comparatively fewer wearing the chador (3%) or niqab (3%).

“This survey allows Muslims’ own perspectives to be registered through proper research, rather than hypothesized—sometimes hysterically—by others”, says Dr. Kathy Bullock from the Tessellate Institute, one of the study partners. “ Just as the 2006 study is still cited now ten years later, we know this updated version will continue to inform politicians, academics, journalists, community activists, and all concerned about the place of Muslims in society.”

The 2016 survey of Muslims in Canada was conducted by the Environics Institute for Survey Research, in partnership with the Tessellate Institute, the Canadian Race Relations Foundation, the Inspirit Foundation, the Olive Tree Foundation, and Calgary-based Think for Actions.