Muslims from across North America started arriving in Chicago on Friday to attend the opening day of the Islamic Society of North America (ISNA) 53rd Annual Convention, one of the largest gatherings of its kind on the continent.

“I welcome all of you from across America to the ISNA Convention,” said ISNA President Azhar Azeez during his Friday sermon. “I want to thank the Muslims in Chicago. They have, over the years, given us the most memorable conventions.”

“This election year has been the most polarizing we have seen,” he added. “I believe the challenges we face are temporary and we shall overcome them, InshaAllah.”

“Respond to every act of evil with good,” Azeez advised. “And don’t be sad, Allah is with us.”

“Eid Al-Adha will be on September 12, InshaAllah, the day after September 11,” he noted. “I call on all organizations, mosques and groups to have a moment of silence on the day of Eid for the victims of 9/11 and victims of terrorism all over the world.”

“Let us make a new beginning on this day to bring all Americans together.”

Government and interfaith leaders, as well as heads of organizations brought greetings and well wishes for a successful gathering during the inaugural session. 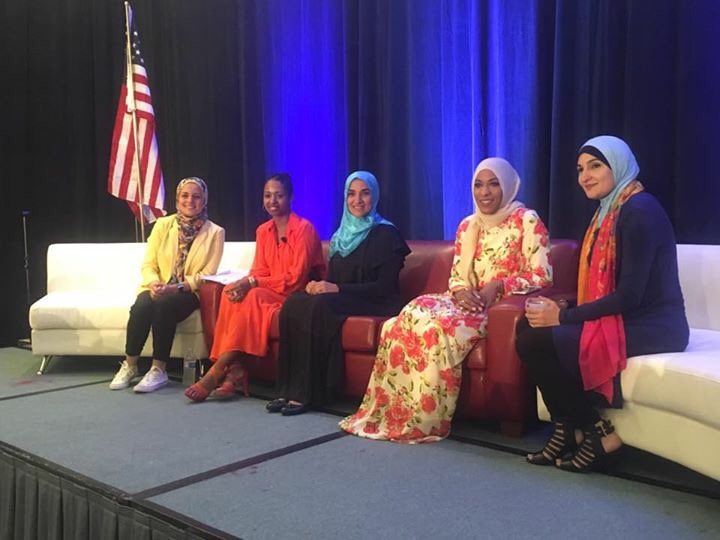 The highlight of the first day was the evening session titled, “Year in Review: Strength and Honor—Today’s Headliners” that brought together Larycia Hawkins, Ibtihaj Muhammad, Linda Sarsour, and Dalia Mogahed – outstanding American women who confronted the collective struggle of Muslims with faith, resolve and confidence, and who made the headlines because of it.

“Never let anyone dictate your journey for you,” said American Olympian, Ibtihaj Muhammad. “I feel very blessed to be in this position and my experiences have made me stronger.”

Ibtihaj Muhammad is a five-time Senior World team medalist and 2014 Senior World Team Champion who made history in Rio as the first U.S. woman to compete in the Olympic Games in hijab.

She earned the bronze medal as part of Team USA becoming the first Muslim-American athlete to earn a medal at the Olympics.

Muhammad said that athletes often avoid the political but she felt the need to take a stand,

Another panelist who made the headlines this past year was Dr Larycia Hawkins who is an American Christian scholar, author, and speaker.

She became the center of a global controversy when Wheaton College suspended her after she wore a hijab and claimed that Christians and Muslims worship the same God.

“What’s very important for the Ummah to understand is that women’s bodies are political in way that men aren’t,” Dr Larycia Hawkins told the audience.

“To be Christian is to walk in solidarity with Muslims, no matter the cost,” added Hawkins.

Another popular speaker at the evening session was Linda Sarsour who has been featured in local, national, and international media speaking on topics ranging from women’s issues, Islam, domestic policy and political discussions on the Middle East conflict.

“We need to make media,” said Sarsour. “Figure out what is the story we as a community want to tell and tell it.”

“We, as a community, have the opportunity to make stories.”

The convention will continue throughout the weekend and is packed with plenary sessions to be addressed by prominent Muslim speakers and includes workshops on a variety of topics.

The Muslim community, estimated at over 400,000 in the greater Chicago area, is one of the most diverse in the country and has been integral to the success of the ISNA conventions.

Estimates put the Muslim population in the US at between five and eight million.

ISNA’s annual convention dates back to 1963, when the first such event was organized by the predecessor to ISNA, the Muslim Students Association of the United States and Canada.