Over 70,000 Canadians have signed an Online petition e-44 calling upon the House of Commons to recognize that “extremist individuals do not represent the religion of Islam, and (condemn) all forms of Islamophobia.”

The petition that was initiated by Quebec resident Samer Majzoub, President of the Canadian Muslim Forum, and sponsored by the Federal Liberal MP for Pierrefonds-Dollard, Frank Bayliss closed on Thursday evening.

On Wednesday, New Democratic Party Leader Tom Mulcair attempted to introduce a motion based on the petition in the House of Commons.

“Mr. Speaker, in a moment I will be seeking unanimous consent for an important motion based on the e-petition sponsored by the Hon. Member for Pierrefonds—Dollard that asks that we, the House of Commons, condemn all forms of Islamophobia,” Mulcair said in the House of Commons. “It is a non-partisan petition signed by more than 66,000 Canadians.”

“Following discussions, with all parties in the House, I believe you would find consent, Mr. Speaker, for the following motion that the House join the more than 66,000 Canadian supporters of House of Commons petition e-411 in condemning all forms of Islamophobia.”

House of Commons Speaker, Geoff Regan asked if Mulcair had unanimous consent to move the motion — which was met by a chorus of ‘no’ responses from the Conservative bench, according to the NDP.

“There is really no excuse to block an attempt to have Parliament denounce Islamophobia in all its forms,” said Mulcair in a release that accuses Conservative MPs of blocking the introduction of the motion.

Samer Majzoub, the initiator of the petition, was in Ottawa to witness his motion pass and told reporters that he was sad to see Conservative MPs block the motion.

“How could some one pretend to be reflecting Canadian values reject to endorse a motion that stand up against hatred,” tweeted Majzoub. 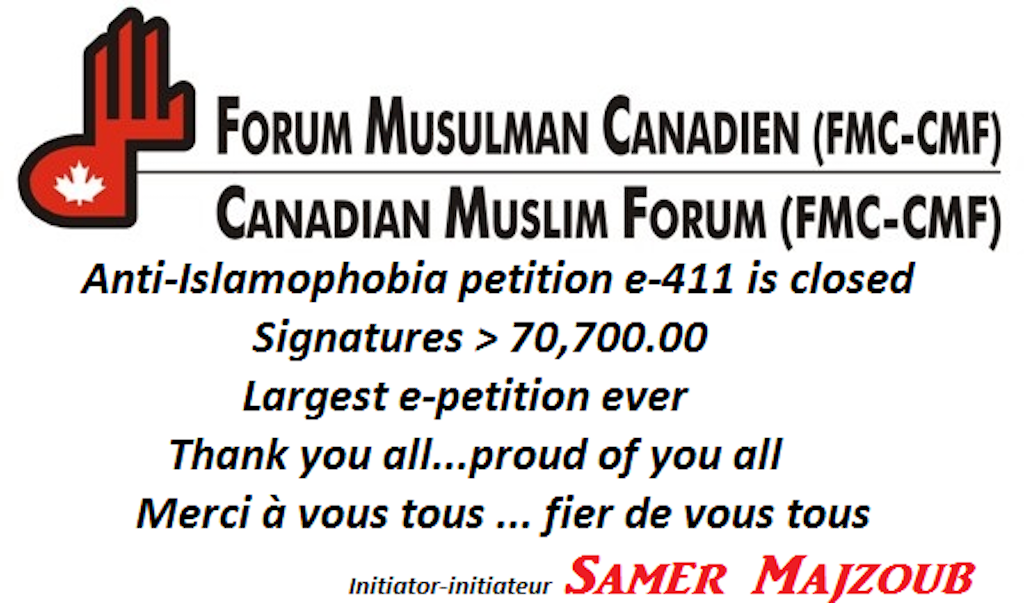 The full text of the petition to the House of Commons

We, the undersigned, Citizens and residents of Canada, call upon the House of Commons to join us in recognizing that extremist individuals do not represent the religion of Islam, and in condemning all forms of Islamophobia.