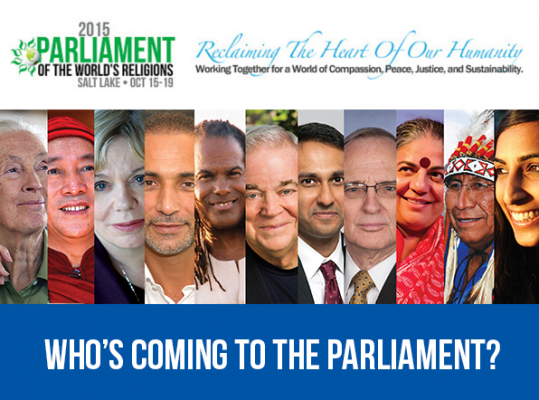 “Parliament is coming here because we’re open to all people, to all religions, all faiths,” said Imam Mujahid, Chairman of the Parliament’s board of trustees and the first Muslim to be elected to the position.

The Parliament is the oldest and the largest gathering of people of all faith traditions, with 10,000 participants from 80 countries expected to attend the convention at the Salt Lake Convention Center.

The convention themed, “Reclaiming the Heart of Our Humanity,” is filled with programs and conversations on climate change and creation care; war, violence and hate speech; and economic inequality and wasteful living.

The Dalai Lama of Tibet, who was scheduled to attend the Parliament, is unable to do so due to health reasons.

“He was fully aware at this moment that it’s important to listen to doctors, but he was kind enough to spend a whole hour with me and we recorded an extraordinarily good interview as well as a short talk,” said Imam Abdul Malik Mujahid of his recent visit with the Dalai Lama.

“It has some amazing information in there. We’re keeping it a secret and we’re going to release it at the time slot he was supposed to speak here.

Connecting different faiths under one venue, the event is highly anticipated by many speakers and participants.

“I’m so excited for the Parliament in Salt Lake City,” said Dr. Eboo Patel, Founder and President of the Interfaith Youth Core.

“The event is a massive platform for the interfaith movement. I am personally grateful to the Parliament because it, in cooperation with URI networks and events, lit the initial fire that became Interfaith Youth Core, the organization I lead. May the 2015 Parliament animate many more such endeavors,” added Patel.

The first Parliament took place in 1893. Since, then this historic event has taken place in Chicago, USA, Cape Town, South Africa, Barcelona, Spain and Melbourne, Australia.

For the first time in more than twenty years, the Parliament of the World’s Religions returns to the United States, bringing together people of spirit and faith from around the world.

“The Parliament is a great networking opportunity and 60% of attendees are well-connected within the interfaith community,” noted the Parliament organizers. “Most people attend because of the extraordinary experience and relationships formed at the Parliament.”

“Why is the Parliament of Religions important? It is ‘Compassion School’ with spiritual leaders and teachers from all over the world,” said Bettina Gray Co-founder and former Chair of North American Interfaith Network.

“While this is not the vision of religion currently on display in the media and popular culture, these gatherings represent the seed for a future entirely different from today’s.”