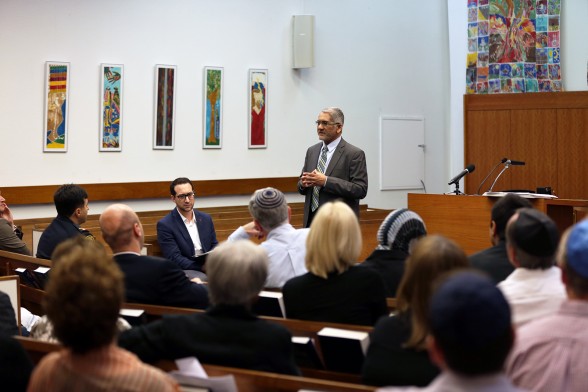 (June 30, 2015) – Holy Blossom Temple, one of Canada’s most influential synagogues, hosted an Iftar gathering that brought Muslims and Jews together to learn about each other’s traditions of fasting and to share in the fast-breaking meal last Tuesday, June 23.

The Iftar dinner was co-sponsored by the Intercultural Dialogue Institute, a non-profit organization whose aims are to promote enduring interfaith and intercultural cooperation, tolerance and dialogue.

“This Iftar brings us together tonight for greater understanding and spiritual awareness, and to build relationships,” Muneeb Nasir, Executive Director of the Cordoba Centre for Civic Engagement and Leadership, told the gathering.

Founded in 1856, Holy Blossom Temple is Canada’s largest Reform synagogue with 7,000 members and the oldest Jewish congregation in Toronto.

A number of distinguished rabbis have led the Reform institution, including the late Gunther Plaut and Dow Marmur, now Rabbi Emeritus. 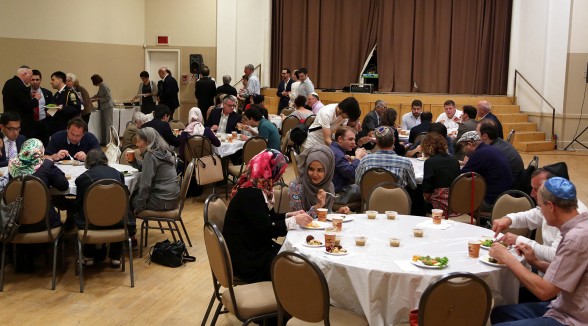 Earlier in the week, Rabbi Dow Marmur wrote in his Toronto Star column, “The spirituality of eating with people across religious divides goes much further than is normally offered at interfaith gatherings.”

“As what we eat and how we eat reflects both culture and religion, the Intercultural Dialogue Institute seems well suited to show us the way,” noted Rabbi Mamur. “Its invitation to celebrate Iftar with Muslim friends is, I hope, only a beginning.”

Prior to the fast-breaking meal, Rabbi Michael Satz and Muneeb Nasir provided teachings about fasting in their faith traditions.

“The primary purpose of fasting in Islam is to achieve greater consciousness of God, prioritizing God in one’s life to achieve greater spiritual awareness,” said Muneeb Nasir. “For a month, we take a break from our usual lives – breaking our habits of consumption and interrupting the rhythms of our daily life – to return to meaning and essentials.” 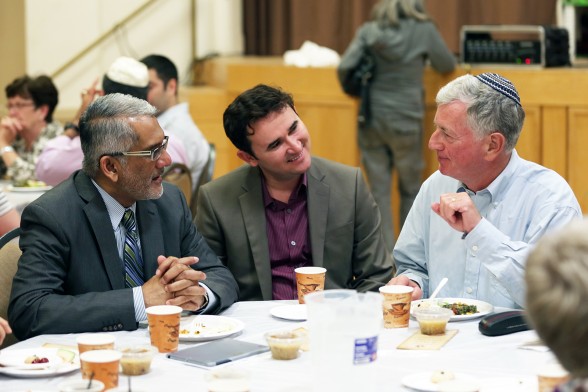 The members of the two Abrahamic faiths were also privileged to observe each other’s prayers at sunset. Later, over the fast-breaking dinner participants engaged in lively discussions.

“Iftar dinners bring together people of various faith and ethno-cultural backgrounds and serve as a means of fostering dialogue and cross-cultural awareness,” added Yelgul. “Each of these dinners has received many attendees from all walks of life including government representatives, MPs, MPPs, diplomats, bureaucrats, professionals, business people, representatives from media and academia, as well as religious and community leaders.”