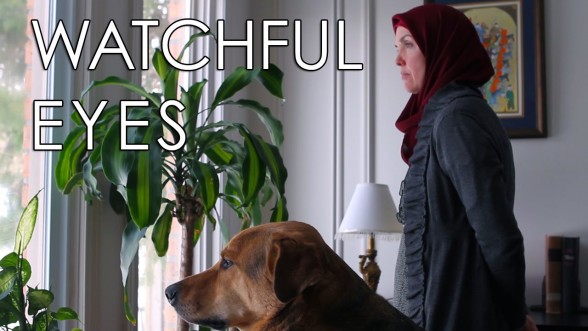 (April 7, 2015) – Filmmaker Aman Ali shares word of Homegrown Homies, a wonderful new internet short film series with Google about the lives of Muslim Americans. The first episode is about professor and author Dr. Ingrid Mattson and her dog Ziggy.

“Dr. Mattson is one of the most prominent female leaders in the Muslim community, and was almost attacked and received several hateful threats for being in her position,” Aman tells us. “So she got a dog named Ziggy to protect herself and her family and thus a beautiful bond was born.”

“Our series is steering clear of religion and preachiness because that shit is lame and turns people off,” adds Aman, “Myself included. So our storytelling series is about the lives of Muslim Americans focusing on emotions like love, regret, redemption, guilt, sadness, and joy.”

Dr. Mattson understood that dogs were haram, or forbidden, when she converted to Islam. She learned it’s more nuanced than that. And at any rate, she and Ziggy are best buds forever.