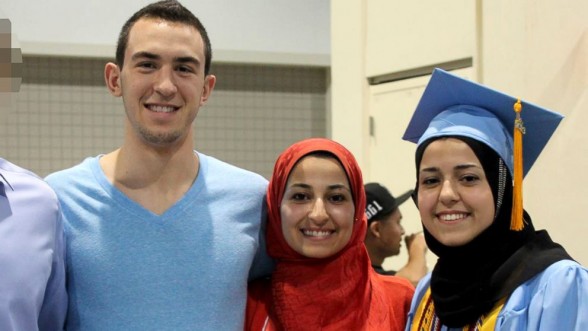 (February 11, 2015) – Candlelight vigils are planned in cities across North America over the next few days to remember and pray for the three Muslim students who were the victims of a shooting in Chapel Hill, North Carolina.

Craig Stephen Hicks, 46, was arrested and charged with three counts of first-degree murder.

A vigil was held at the University of North Carolina at Chapel Hill campus tonight.

“The vigil is designed to celebrate and honor the lives of these three students and appeal to the communities for calm,” said the university.

Across America, many candlelight vigils are being held over the next few days.

A candlelight vigil will be held in Ottawa at the Human Rights Monument today.

“They will be remembered in beauty, the great work they’ve done, and the beautiful future they would have had,” said the organizers of the event.

A vigil is planned for Toronto on Friday, February 13 at Dundas Square.

“We organized the vigil in Toronto to show support and solidarity with the families of the victims and the UNC Chapel Hill community,” said Samira Sayed-Rahman. “But also, to take a stand against the rise of Islamophobia and hatred in our communities here in North America.”

The funeral prayer for the three young people has been set for tomorrow after the midday prayer (1:35pm) on the Method road soccer fields across from the Islamic Association of Raleigh.

“We all mourn the loss our three bright stars: Deah Barakat, Yusor Mohammad Abu Salha, and her sister, Razan Mohammad Abu-Salha,” said the Islamic Association of Raleigh in a statement on their website. “The Muslim community is deeply and profoundly saddened by this tragedy. The families asks for calm, patience and restraint, and your prayers. To God do WE all belong, and to God WE will all return.”

“As Deah’s brother so wisely stated, they are ‘our three winners.’ They have been reunited with their Lord, and we pray they all enter paradise with His choicest blessings.”

Deah Barakat was enrolled at UNC-Chapel Hill’s School of Dentistry, and his wife, Yusor was planning to begin her dental studies at UNC in the fall. They were recently married. Razan Abu-Salha was a student at North Carolina State University.

Deah and Yusor volunteered for a global dental-care initiative and aided people in the United States and the Middle East by providing care and supplies.

One project Deah was working on was called “Refugee Smiles,” which focused on providing dental care to refugees of the Syrian War in Turkey and raise funds to support local dentists. He started a campaign on YouCaring.com to collect donations for the Syrian American Medical Society.

Today, donations have been pouring into the campaign to honor three Muslim students.

The murders have deeply touched people around the world and the deaths have prompted an outpouring of anger on social media for the lack of media coverage of the incident in the US.

The hashtags #ChapelHillShooting and #MuslimLivesMatter were both trending on Twitter, with many claiming the crimes would have garnered more attention had the gunman been a Muslim and the victims white.

“Based on the brutal nature of this crime, the past anti-religion statements of the alleged perpetrator, the religious attire of two of the victims, and the rising anti-Muslim rhetoric in American society, we urge state and federal law enforcement authorities to quickly address speculation of a possible bias motive in this case,” Nihad Awad, national executive director of the Council on American-Islamic Relations, said in a statement.

However, in a statement, the Chapel Hill Police Department said their initial investigation indicates the murders were motivated by a parking dispute.

“Our preliminary investigation indicates that the crime was motivated by an ongoing neighbor dispute over parking. Hicks is cooperating with investigators and more information may be released at a later time,” said the Chapel Hill police.

Dr. Mohammad Abu-Salha, the father of Yusor and Razan, finds that reasoning hard to swallow.

“This was not a dispute over a parking space; this was a hate crime,” Abu-Salha told told the News & Observer, a Raleigh, North Carolina, newspaper. “This man had picked on my daughter and her husband a couple of times before, and he talked with them with his gun in his belt. And they were uncomfortable with him, but they did not know he would go this far.”