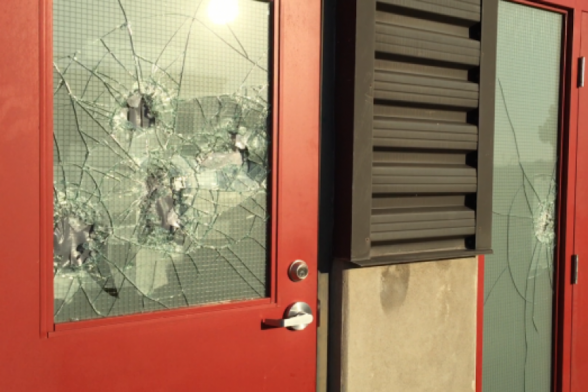 (November 17, 2015) – A group of Muslims in the Greater Toronto Area have started a crowd funding campaign to raise funds for the Ram Dham Temple in Kitchener that was vandalized last Sunday when rocks were thrown through the windows.

The temple’s spiritual leader, Swami Chaitanya Jyoti, says she was attending a vigil at Kitchener City Hall, paying tribute to the people killed in the Paris attacks, and when she returned the windows had been broken.

“As Muslims we are quickly realizing that these hate crimes are not just affecting our community; it is not just our mosques being burned, or our people being attacked,” says Arshia Lakhani, organizer of the gofundme campaign. “This extends to all visible minorities who are victims of hatred.”

“We want to display love and support by reaching out to the community to ask you to support the Ram Dham Temple in reaching $10,000 by December 1st to cover the costs of the damages.”

“After the heartbreaking, and terrible attacks on Paris, unfortunately many faith-based groups have been victims to hate crimes around the world.,” adds Lakhani.

“This is a time to show that love and solidarity between communities speaks louder than hatred.”

To support the campaign, go to: https://www.gofundme.com/tuaraevt