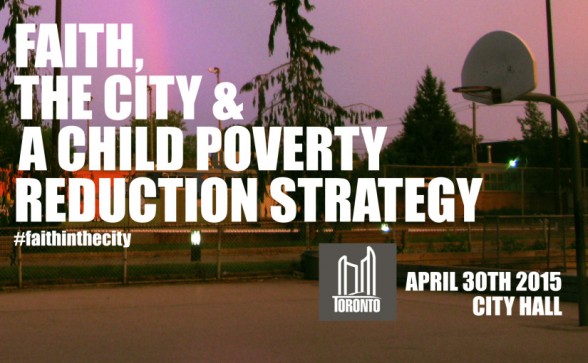 (April 27, 2015) – A Multi-Faith Symposium organized by Faith in the City, an alliance of Faith communities, will be held on Thursday, April 30th at Toronto City Hall.

This year, the Faith in the City Symposium will focus on developing a Poverty Reduction Strategy and specifically how that relates to children.

The Honourable Hugh Segal, Master of Massey College, an interdisciplinary postgraduate institution at the University of Toronto, will deliver the plenary address.

The symposium will also include workshop sessions, a panel discussion and the presentation of the Faith Statement on Child Poverty Reduction.

Inaugurated in 2013, Faith in the City is an initiative of various faith leaders and city officials encouraging faith communities to work across their traditional boundaries, and in co-operation with the City of Toronto, on issues of common social concern.

Faith in the City supports the recent process begun by the City of Toronto to develop a Poverty Reduction Strategy.

Poverty directly affects hundreds of thousands of Torontonians, with negative repercussions on all city residents. Almost 150,000 children in Toronto live in poverty.

Visit faithinthecitytoronto.ca to learn more about the symposium and the Faith Communities’ Charter and Action Plan on Poverty Reduction.