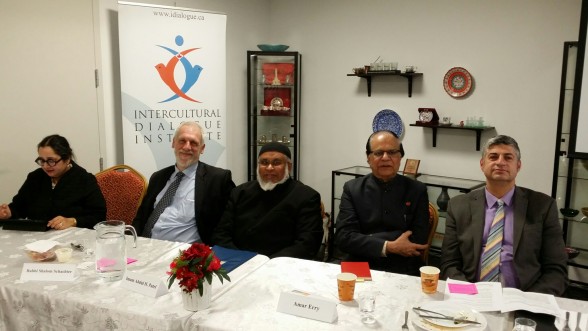 (February 5, 2015) – This week, Toronto is celebrating World Interfaith Harmony Week and there is growing interest across the city by faith and civic groups to partake in interfaith activities.

“In the first year in February of 2013, we had 2 events but given the nature of our diversity in Toronto and the readiness of our interfaith community to accept its ideals, the week has been embraced and has grown into 8 events across the GTA,” he said. “We already know that there will be more next year as people have approached us because they want to get onboard.”

“How we Talk to God” was the theme of Tuesday evening’s program held at the Interfaith Dialogue Institute’s headquarters in downtown Toronto. The evening featured a vegetarian meal, multi-faith art display, and a panel discussion featuring prayer experiences from diverse faith traditions. 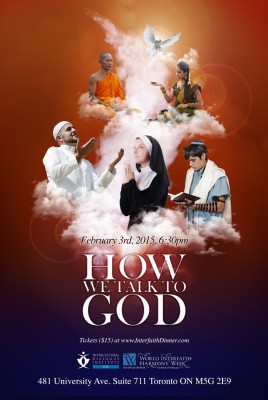 “This event is designed to enhance the mutual understanding amongst cultures and taking another step towards eliminating discrimination, intolerance and hate based on religion, faith or belief,” said John Voorpostel. “Together we have different faiths and traditions and we’ve embarked on a noble cause committing ourselves to showing Toronto and the world that we can live together and foster the very human desires for peace, understanding and respect.”

“This year we are celebrating our common humanity,” he added. “This is a very important theme because it is so fundamental to understanding the other and forms a foundation for taking responsibility for another’s well being.”

Just under a month later, on October 20, 2010, it was unanimously adopted by the UN and since then the first week of February is observed as a World Interfaith Harmony Week.

The World Interfaith Harmony Week is based on the pioneering work of The Common Word initiative.

This initiative, which started in 2007, called for Muslim and Christian leaders to engage in a dialogue based on two common fundamental religious commandments, Love of God, and Love of the Neighbour.

The World Interfaith Harmony Week extends the Two Commandments by adding ‘Love of the Good, and Love of the Neighbour’.

The week’s events provide a platform when all interfaith groups and other groups of goodwill can show the world what a powerful movement they are.