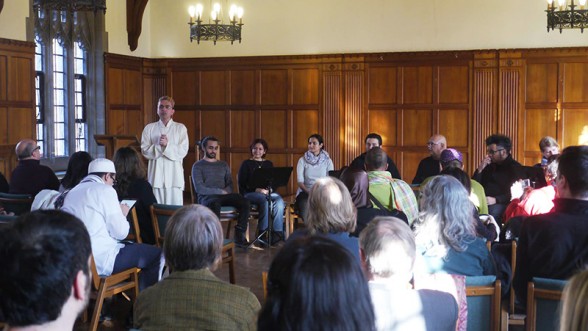 By Gary Paterson, 41st Moderator of The United Church of Canada

(May 8, 2015) – These are not the easiest of times for Christians and Muslims to celebrate our common heritage and live together in peace – even here in Canada, as a Quebec judge refuses to hear the case of a Muslim woman because she was wearing a hijab; or our federal government reacts to the wearing of a niqab during a citizenship ceremony; as Islamophobia threatens to increase.

So it is important to hear about moments when there is good will, and neighbours support each other.

For instance, I had a chance to meet two of the Muslims of the Bloor-Islington Community who work in the same office complex where the General Council Office is located.

Every Friday afternoon and during Ramadan our United Church chapel becomes a prayer space for their community.

They wanted to say thank you for this twelve-year relationship, and gave the General Council Office a beautiful plant arrangement, accompanied by a donation to Mission and Service, and a letter of appreciation, which we framed, and placed, on the reception desk.

Here’s an excerpt from the letter that General Secretary Nora Sanders sent back:

We are pleased to share our chapel with your community for your Friday congregational prayers and are glad you feel welcome here. Gathering in community to pray is central to both our faiths. Both our faiths also teach love and peace. With this long-standing arrangement, I believe our communities are demonstrating how people of different faiths can come together in a spirit of neighbourliness, cooperation, and mutual respect.

Another instance, last January 14, the community of Emmanuel College celebrated Mawlid an-Nabi, the Prophet Muhammad’s birthday – “Peace be upon him!”

The service began in the Muslim Prayer Room, and then, for the second half, everyone moved to the Emmanuel Chapel.

Music was offered by members of the Rifai Sufi Order (see the video clip).

Refreshments were provided. The place was packed.

What a fine way for people of differing faiths to recognize and affirm one another.

Then, just a while ago, I was in Winnipeg for Easter celebrations.

On Maundy Thursday, an event had been organized at the Canadian Human Rights Museum, which began with an hour-and-a-half tour, followed by a time of discussion.

It is an excellent museum, less focused on artifacts, and more on stories, catching a feel for the ups and downs in the struggle to affirm human rights around the world.

There is a particular focus, of course, on Canada – and our history is often painful.

Think Aboriginal peoples, the Chinese head tax, the Japanese internment, the turning away of Jewish refugees in1939.

When we gathered for discussion, some 40 of us, our focus question was “What can be done to overcome traditional barriers so faith communities may speak to human rights issues with one voice?”

I moderated a panel of Jewish, Sikh, Muslim, and Christian speakers, with The Very Rev. Stan McKay, (former Moderator and member of the Fisher River First Nation) offered closing reflections.

There was much that these different faiths held in common – such as the holiness of creation; of human beings embodying the image or Spirit of God, and therefore, deserving of human rights.

We also flagged some of our differences – for instance, our understanding of gender roles and sexual orientation.

It was a moment of recognizing how important it is to have conversations that matter with neighbours of different faiths, particularly as we reflected on those moments, past and ongoing, where that has not happened.

I know that across the United Church we are engaged in a variety of experiences of interfaith conversation and action – sponsoring and befriending Syrian refugees; exchange visits between church and mosque and synagogue; congregational educational events; shared worship space; multifaith calendars.

The United Church has developed resources that speak to our relationship with Judaism (Bearing Faithful Witness [PDF]) and Islam (That We May Know Each Other [PDF]); and, at General Council 42, we will receive and make recommendations about adopting a similar resource that speaks to our relationship with Hinduism. (Honouring the Divine in Each Other [PDF]).

I am grateful to be part of a church that honours the multifaith reality of Canada.

Reprinted from www.garypaterson.ca with the permission of The United Church of Canada.