(March 14, 2015) – Thousands of Canadians gathered in public squares across the country to protest the Conservative’s government proposed anti-terrorism legislation that would expand the powers of police and Canada’s spy agency.

In Toronto, an estimated crowd of 2,000 people came out to Nathan Phillips Square to join in the countrywide protests billed as the ‘National Day of Action’ to stop Bill C-51. 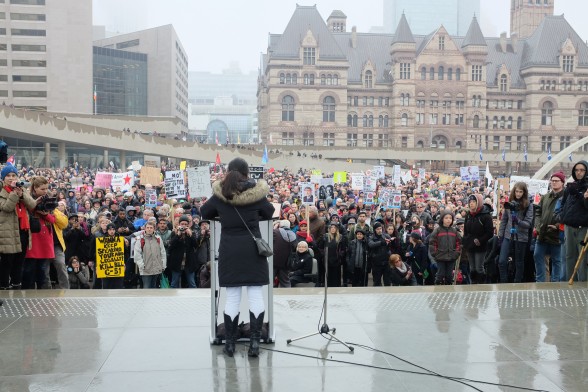 The proposed bill would give the Canadian Security Intelligence Service, CSIS, the ability to actively disrupt terror plots, expand no-fly list powers and allow police to have greater control in limiting the movement of a suspect.

Critics of Bill C-51 say it would greatly expand the powers of CSIS, to the point where it will create a “secret police force” and that it lacks appropriate oversight.

Prominent Canadians voiced their concern over the bill at the Toronto rally. 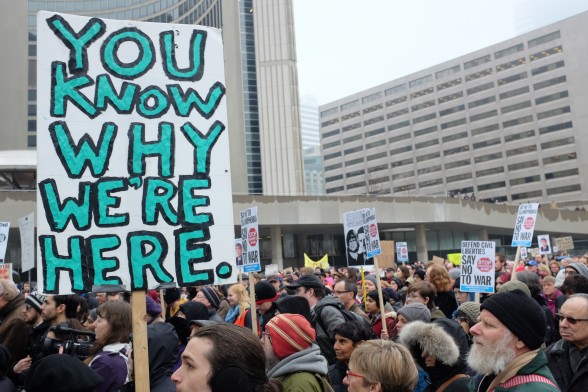 “[Mr. Harper] wants Canadians to be scared out of their wits,” Green Party Leader Elizabeth May told the rally. “He wants us to be scared of everyone; different cultures, different religions.”

“He wants us to be divided and fearful…. Canadians will not be scared out of their rights,” she said.

The government introduced Bill C-51 in January and it is currently before House public safety committee. 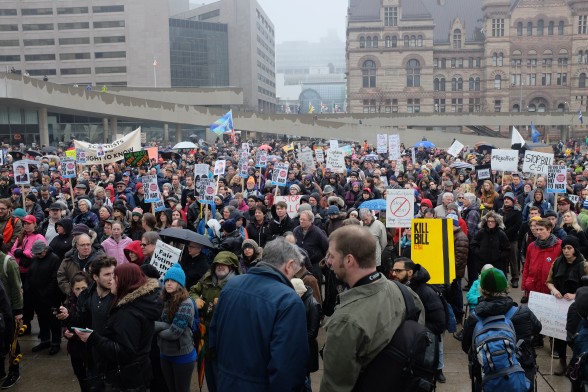 “C-51 is so reckless and dangerous it calls for all of us to do all that we can to speak out,” he said. “There will be a steep political price to pay at election time for these reckless, dangerous, and ineffective privacy intrusions.”

Protesters said they are worried the bill will be used to harass or silence critics of the government’s policies, including environmental and aboriginal ones.

According to StopC51.ca, “Canadians have spoken out in over 70 communities across the country.”

“This bill disproportionately targets indigenous communities, environmental activists, dissidents, and Muslims, many of whom are already subjected to questionable and overreaching powers by security officials,” states the StopC51.ca website. “This bill will make it easier and ostensibly lawful for government to continue infringing upon the rights of peaceful people.”