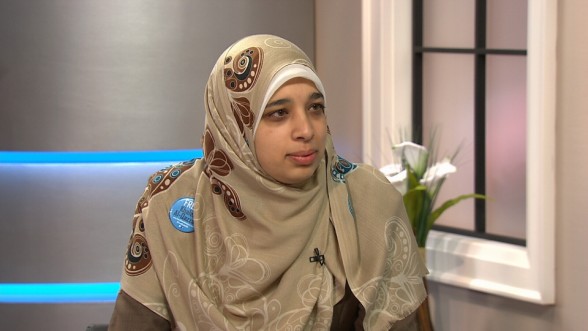 (January 8, 2015) – A conversation between Sarah Attia and political science lecturer, Katherine Bullock, about Sarah’s efforts to free her husband, held without charge, and contrary to international and Egyptian law, in an Egyptian jail for over 535 days.

Sarah, thanks for agreeing to talk to us during this stressful time. Take us back to the first day. When did you realise that your husband, Khaled al-Qazzaz, wasn’t simply just late home from work?

Thank you for giving me the opportunity to share my family’s story. On July 3, 2013 he was at work as usual. When the military announced that they would take over, around 6 pm, I began to worry. That’s when I lost contact with him. Later that night I got a call from a number I didn’t recognize saying that he was ok, and would be home soon. And he never came home.

You have four young children. What have you told them about their father’s absence from home?

In the beginning I did not know what to tell them. They knew that their father was doing a good thing. He would tell them how he was working to make Egypt a better place. I didn’t know how to explain to them what was happening. They could sense the tension at home, and the stress I was under. This was reflected in their behaviour.   My son, 7 at the time, started becoming very tense, and easily aggravated. My 5-year old daughter could not sleep in her room at night any more.

Eventually, I had to tell them, especially when we were able to visit him in the prison months later. It was very hard to explain to them the reality of good and evil. I tried to use children’s stories that they were familiar with, to show them that good wins at the end. I tried to make them feel safe and that everything would be ok. I told them that God was on our side and He would protect our family. I have to give them hope.

They asked a lot of difficult questions that I didn’t have the answers to.

How much do you think they understand what is going on? Do they talk to you about it?

They understand that their father was taken to prison, for no reason. They miss him very much. I overhear the little ones talking to their toys about their Dad. Fatema, who was 4, would always say things like, “dear God, please bring my Dad home.”

My eldest, Abdelrahman, had the most difficult time with it. He spent months in denial, refusing even to speak about it. He wouldn’t go to the prison visits.   It was only when we returned to Canada, and he felt safe, was he able to start expressing some of the pain and confusion that he was holding up inside.

How have you been managing, effectively as a single mom, since your husband was unlawfully detained?

I know that you have travelled to Ottawa, the UK, and Geneva to try and get Canadian and international assistance to free your husband. How have officials been responding?

I have travelled a lot to gain awareness of my husband’s case. I have received a lot of support from people all over the world. I have also received wide support from human rights organisations including Amnesty International, Human Rights Watch, and the United Nations Human Rights Council. Khaled’s situation is a very clear case of human rights’ violation and arbitrary detention after being detained for over 535 days without charge. The Canadian embassy has followed our case closely and has helped my family through all of this. Many Canadian Members of Parliament, from all parties, have stood up for my family’s case. I hope that their concern will help secure Khaled’s release.

Who is looking after the children while you travel? Can you talk about the impact Khaled’s unlawful detention has had on them?

My parents, who live in Canada, take care of my children when I travel.   It is even more difficult for the kids when I travel, and I can see how they struggle to accept it. I have explained to them that I have to travel to further their father’s case so that others can help bring him home. They try to be strong to support me in that. It pains me to see them have to go through all of this at such a young age. I hope they grow up to be stronger individuals, who stand up for justice, after all that we have been through. 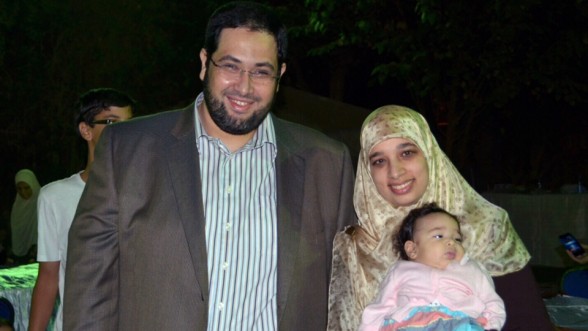 Can you explain how, in the twenty-first century, the Egyptian government has been able to hold a person without charging them with any offence for such a long time?

I struggle with this question a lot, but it continues to happen.   It is very clear that Khaled needs to be released, and I hope that this happens soon.

Major Canadian newspapers have published your story, and every major television has featured your personal tragedy. Often the comments that ensue are unsupportive of your and Khaled’s situation. Does this affect your efforts to release him?

Since I returned to Canada I have been touched by the overwhelming support I have received from thousands of Canadians nation-wide. I have received messages of hope from people I had never met before. They have inspired me not to give up. My family’s ordeal is a clear story of injustice, and that’s why we have received such wide support and so many people have spoken up and written about our story.

People are entitled to their opinion, and I am a firm believer of freedom of expression. I just wish that they were able to see the sad reality, the injustice, and the human story.

Do you have a message to those not supportive of your efforts?

I decided months ago to spread my story through kindness and goodness. I was a regular Canadian, a mother, a teacher. My life was thrown upside down over night. It could happen to anyone. I will continue to speak of this ordeal everywhere I go, in the hope that more people will stand up to end it.

In early December renowned Canadian author and human rights defender, MoniaMazigh, was in Toronto launching her new novel. She came to prominence in Canada in 2002 seeking to have her husband, Maher Arar, released from a Syrian prison, where he had been illegally and unjustly sent by the US government. Did she have any special words of wisdom to offer you?

Monia has been a symbol of hope and resilience for me from the start. She taught me to speak up against injustice and gave me the courage to fight for my husband’s return. She was able to connect with me in ways that others could not. She understood the pain and struggle of what I was experiencing as a mother and a wife.   Her own experience has helped me get through the most difficult moments.

Do you have a final message to the reader?

I ask all readers, as they come together with their families during the holidays, to remember my family with a thought or prayer. I will continue to advocate for my husband’s release until he is home.

Thank you Sarah. May your efforts be rewarded and Khaled be released without delay.

UPDATE: As this interview was being edited for publication Khaled received a release order from Egypt’s Attorney General.  A week later he is still being detained.  We call on John Baird, who is travelling to Egypt this month, to ask the Egyptian authorities to finalize the release immediately.