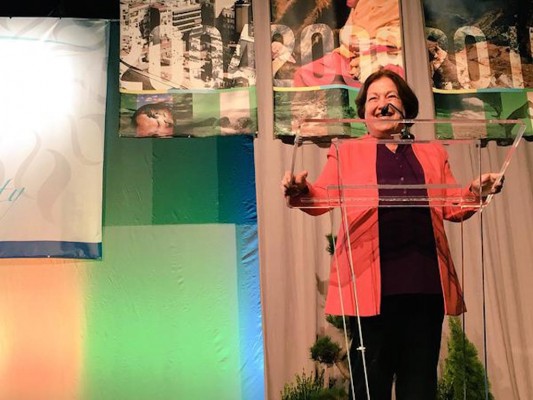 (October 18, 2015) – A declaration was issued at the Parliament of the World’s Religions on Saturday, October 18, calling on people to stand against hate and to pursue peace and justice.

The declaration followed a plenary session titled, ‘War, Violence and Hate Speech’ that was addressed by world-renowned experts, analysts and lifetime champions of peace.

The 1976 Nobel Peace Prize Laureate Mairead Maguire made a passionate plea for peace.

“We come here as people of all different religions and none, from all different beliefs and we come from all parts of the world, and we represent millions and millions of the human family who want peace,” Maguire said.

“Peace is not a big thing to ask for.

“We have a human right to peace and everyone in their hearts want peace for themselves, their families, their communities. They want enough to eat, they want a decent home, they want human security and they want to freely speak about how they feel and what they believe in.”

“We must realize that we are human beings, we have our common humanity, that we are capable of loving, that no matter what wrong people do, in their hearts they are good.”

The Parliament of the World’s Religions, the world’s largest inter-religious gathering is currently underway in Salt Lake City, Utah. 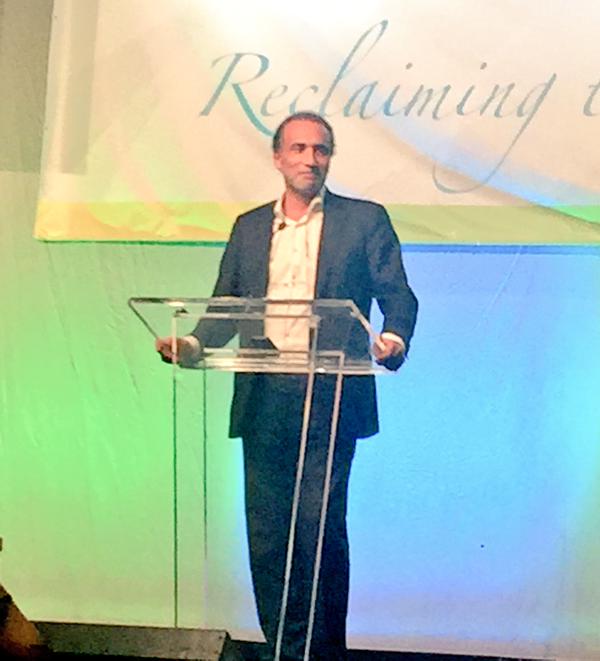 “We have to take peace seriously and when we speak about peace, it takes effort,” he said.

“The most important thing is the commitment of every one of us at the personal level, and community level, to take peace seriously, meaning all the conditions of peace should be promoted and protected and this is a struggle.”

Alan Boesak, South African cleric and anti-apartheid activist challenged the audience to go beyond talking about the grievances facing humanity and to stand up for the suffering peoples around the world.

“Over the years, I have been to too many meetings of religious leaders and had far too many discussions, taken too many resolutions, have signed too many petitions not to know that we, as we are gathered here tonight do know very well that something is wrong,” he said.

“The time has come for us not to be afraid to say it,” Boesak challenged the gathering.

“And I am not talking about mentioning the wrongs that we see – I am talking about how we say it, as faithfulness to those who suffer, with truth, with courage and with compassion.”

“The wrongs that we see are not just happening, they are made to happen.  And they are happening to the vast majority of God’s children walking this earth.” 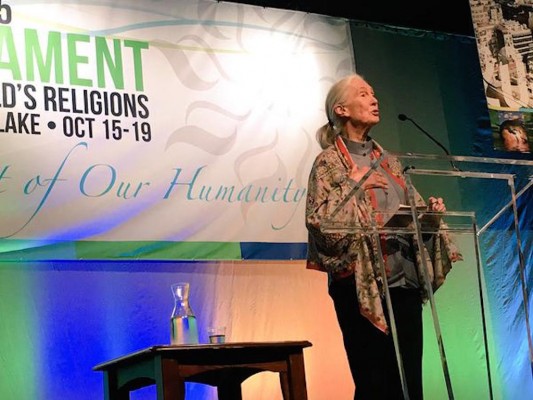 Other notable speakers who gave inspiring talks at the plenary session included Dr. Jane Goodall, the renowned British anthropologist and UN Messenger of Peace, as well as Dr. Karen Armstrong, the religious thinker and author.

“We call on participants in this 2015 Parliament of the World’s Religions to recommit themselves to those exemplary elements of their own tradition that stand against hate and the rhetoric of hate, against violence and terrorism, against conflict and war,” reads the declaration affirmed by the assembly on Saturday.

The Parliament of the World’s Religions was inaugurated last Thursday and runs until Monday, October 19. It has drawn ten thousand people from over 80 countries and 50 different religious and spiritual traditions.

The first Parliament of Religions was held at the 1893 Chicago Columbian Exposition, and was the first formal meeting of the religious East and West.

In 1988 the Council for a Parliament of the World’s Religions (CPWR) was founded to organize a centennial celebration of the original Parliament.

Since 1993, three Parliaments have been held in Chicago, Cape Town, Barcelona and in 2009 the most recent Parliament was held in Melbourne, Australia.