(March 29, 2015) – Max Khan, an Oakville town councillor and the federal Liberal candidate for Oakville North-Burlington, died in hospital this weekend. He was 46.

The news has left residents across Oakville, as well as people across the GTHA, in shock.

Max Khan had called Oakville home for 25 years and was well-known in the community having served Ward 6 since 2006.

He was re-elected for a third-term in October with 85.5 per cent of the vote.

A Bay Street trial lawyer, he brought his experience in law and politics to the table in local, provincial and federal politics, too.

The popular ward 6 Town Councillor had battled cancer several times in the past.

“The Town of Oakville is very sad to learn that long time Town Councillor Max Khan, passed away on Saturday night,” read a message posted on the Town of Oakville website. “Our thoughts and prayers are with his family and friends at this most difficult time.”

“His honesty, integrity and determination to improve his community, was evident to everyone who knew him. He will be truly missed by all of us.”

“Flags at all town facilities will be flown at half-mast in memory of Councillor Khan,” continued the message from the town.

Khan then passed away a few hours later with his family at his side. 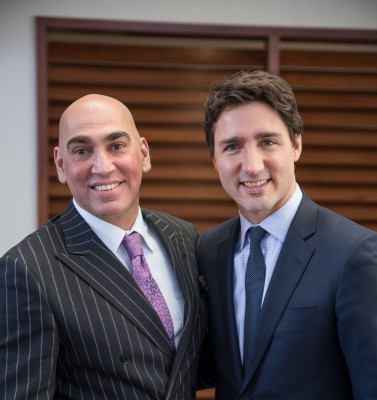 Meanwhile, Federal Liberal Leader Justin Trudeau has sent his condolences to the family.

“I’m shocked and very saddened at the sudden passing of Oakville’s Max Khan,” stated the message posted on the Liberal leader’s Facebook page. “My heart is with his loved ones – he will be sorely missed.”

In addition to his contributions in the political arena, Max Khan was active in the community, working as the legal advisor for the Canadian Caribbean Association of Halton and serving on the board of directors for the Oakville chapter of the United Way.

The father of a young son, Khan was a fan of horseback riding, motorcycles, chess and boxing.