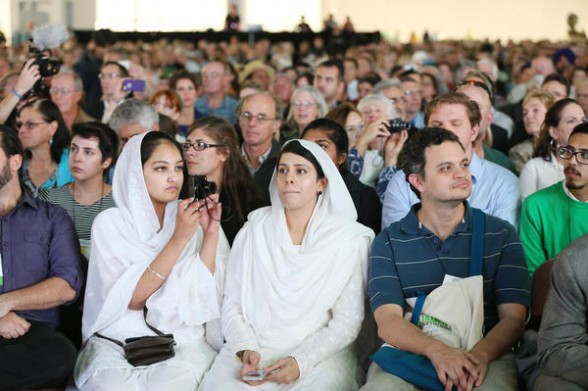 (October 15, 2015) – Thousands of people from around the world filled the Salt Palace Convention Center in Salt Lake City, Utah on Thursday evening for the opening ceremonies of the Parliament of the World’s Religions.

“Welcome, welcome, welcome,” said Imam Abdul Malik Mujahid, Chair of the Board of Trustees of the Parliament of the World’s Religions to thunderous applause from the audience.

“With the permission of the great indigenous people of this land who are the original owners of this place, with love in my heart and compassion in my mind and with smiles on our faces to reclaim the heart of our humanity, I declare the sixth Parliament of the World’s Religions open.”

The inspirational evening of prayers and reflections from faith leaders and dignitaries began with a Grand Procession led by the indigenous nations of Utah and the Grand Basin to the pulsating beat of a tribal drum circle.

“Sisters and brothers, this is our time,” said Imam Mujahid in his address. “Are you with me?”

“This is our time, the world is coming closer in the global village. Let’s bring hearts and minds together and closer. That is the interfaith movement. Our actions speak louder even if the media has difficulty hearing them.”

“Just last week, hate-mongers demonstrated in twenty cities across America against the Muslim community, ” he added. “Who outnumbered them? People of Faith, people of love, people of interfaith.” 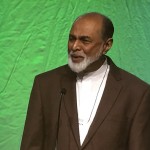 Imam Mujahid also noted that there were only few female speakers at the first Parliament in Chicago in 1893.

“In this Parliament, the majority of speakers are women speakers,” he said to loud applause from the audience.

Ten thousand people from over 80 countries and 50 different religious and spiritual traditions are in Salt Lake City for the Parliament making it the world’s largest inter-religious gathering.

The convention themed, “Reclaiming the Heart of Our Humanity,” is filled with programs and conversations on climate change and creation care; war, violence and hate speech; and economic inequality and wasteful living.

The Governor of Utah, Gary Herbert, welcomed the delegates to the city and state during his address in the opening plenary session.

“I thank you all for being here,” said Governor Herbert.  “As Governor of the great state of Utah, it is my pleasure to welcome you and the Parliament of the World’s Religions – we’re honored to have you here.”

“I see this as an example of what the world can do in coming together in peace and harmony,” added the Governor. “I appreciate the work of people of Faith in trying to make the world a better place; I appreciate the vision of the Parliament of the World’s Religions.”

“We have much more in common than we have in differences,” he said. “We should be able to work together to improve the lives of all mankind and I hope and pray that God will bless us in this sacred and noble endeavor.”

The first Parliament of Religions was held at the 1893 Chicago Columbian Exposition, and was the first formal meeting of the religious East and West.

In 1988 the Council for a Parliament of the World’s Religions (CPWR) was founded to organize a centennial celebration of the original Parliament.

Since 1993, three Parliaments have been held in Chicago, Cape Town, Barcelona and in 2009 the most recent Parliament was held in Melbourne, Australia.

“The Council for a Parliament of the World’s Religions works to cultivate harmony among the world’s religious and spiritual communities to achieve a just, peaceful and sustainable world,” states the Parliament’s mission.

The host city of the Parliament, Salt Lake City, is the headquarters of the Church of Jesus Christ of Latter-day Saints, and many major tourist attractions focus on LDS history.

The city is also a prime destination for travelers interested in outdoor sports with its gorgeous setting between the Wasatch Mountains and the Great Salt Lake.