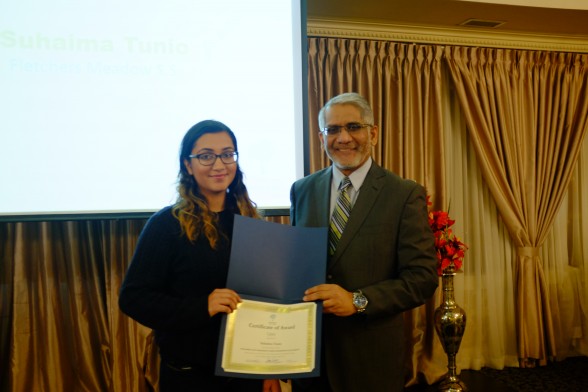 (December 5, 2015) – Canada’s premier Waqf, the Olive Tree Foundation, celebrated its 10th anniversary on Sunday, November 22 with an Appreciation Dinner held at the The Estate Banquet and Event Centre in Scarborough.

The Olive Tree Foundation was founded a decade ago by civic leaders and philanthropists within the Canadian Muslim community.

The Foundation is a charitable organization formed to attract and manage permanent endowment funds and to distribute income from those funds back to the community.

The keynote speech at the Appreciation Dinner was delivered by Naheed Mustafa who spoke on the topic, “Youth Activism and Lessons from #BlackLivesMatter.”

Naheed Mustafa is an award-winning broadcaster and writer and a long time contributing producer at CBC Radio.

Her documentary work from both Canada and abroad has been heard on various programs on CBC Radio, Radio Netherlands, and the BBC.

A highlight of the Appreciation Dinner was the announcement of the 2015 Scholarship and Bursary Awards.

The Foundation annually awards the Mohamed and Opheerah Nasir Leadership Scholarship of $1,000, as well as five bursaries of $500 each honoring Muslim youth achievement in Academic Excellence, Women’s Education, Youth Action, and Special Needs.

“Given the current situation that has recently thrown a dark shadow on Muslims, we want to encourage these youths to continue to be beacons of hope for the future of Muslims in Canada,” added Jadunandan. “We want them to be the future leaders of Canada and to be proud of living in a province like Ontario in a country like Canada.”

The scholarship will be awarded annually to a high school graduate who has excelled in their academic studies and will be entering a post-secondary institution.

The Foundation presented the Ansar Healthcare grant to Yusuf’s Heart, a charitable drive to support the Hospital for Sick Kids Young Families Program in the Division of Adolescent Medicine.

“Yusuf’s Heart was founded in February of 2012,” said Naeem Siddiqi, Vice-President of Olive Tree Foundation. “ Yusuf Mustafa was a beautiful, bright 5-year- old-boy who, unexpectedly yet peacefully, passed away on December 30th, 2011.”

The Young Families Program is a health care service for adolescent parents (under 18) and their children.  The Program monitors these babies and toddlers on an outpatient basis and provides parenting and life skills to the parents.

“Yusuf’s Heart charitable drive support children when they come to visit the Young Families Program,” explained Siddiqi. “The children are allowed to choose a toy or book purchased with donations collected through Yusuf’s Heart.  Yusuf’s Heart is a positive initiative and brings joy to toddlers and to their parents.”

The appreciation dinner included the announcement of two grants awarded to Toronto-based charities.

The RPTV Identity Project is an innovative Broadcast Training Project that will use media technology as a tool to explore topics of social justice – e.g. identity, Islamophobia, media narratives and bias – filtered through a critical youth lens.

Another grant was received by the non-profit, METRAC for the Project: Faith to End Violence and Oppression Project.

METRAC will host a multi-faith community “think tank”, organized by their Respect in Action (ReAct) youth program team, for diverse Toronto youth to discuss the role of faith and spirituality in addressing experiences of interpersonal and systemic violence.