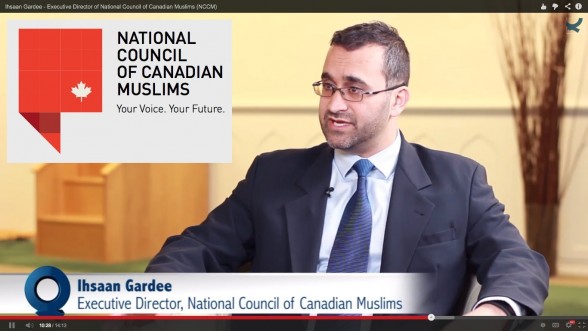 Gardee’s ‘McCarthyesque-type’ reference was to style of questioning used by U.S. Senator Joseph McCarthy in the 1950s, imputing guilt with little or no evidence to back it up. The term is used more generally in reference to reckless and unsubstantiated accusations on the character or patriotism of political opponents.

Diane Ablonczy used her time to question Gardee about what she described “a continuing series of allegations” that NCCM has ties to groups that have expressed support for “Islamic terrorist groups,” including Hamas.

“First of all, on the record, NCCM has condemned violent terrorism and extremism in all of its forms regardless who perpetrates it and for whatever reason,” said NCCM’s Executive Director. “However, the premise of your question is false and is entirely based on innuendo and misinformation.”

“NCCM is an independent and non-profit grassroots, Canadian Muslim civil liberties and advocacy organization that has a robust and public track record spanning 15 years of anti-extremism work, promoting civic engagement, and defending fundamental rights,” he added. “These are precisely the types of slanderously statements that have resulted in litigation that is currently ongoing. The NCCM is confident that the court will provide the necessary clarity on these points to ensure that they are never repeated again.”

The National Council of Canadian Muslims is suing the Prime Minister’s office after failing to get an apology for a comment the organization says linked it to a terrorist group.

The comment in question was made by Prime Minister Harper’s now-former spokesperson, Jason MacDonald, following NCCM’s objection to controversial Rabbi, Daniel Korobkin, being included in the PM’s delegation to the Middle East.

At the time, MacDonald said, “We will not take seriously criticism from an organization with documented ties to a terrorist organization such as Hamas.”

“The NCCM, as you know, is currently suing the Prime Minister’s office for defamation because of false statements made against our organization on the basis of innuendo and misinformation and we have every confidence that the outcome will be favorable to the NCCM,” Ihsaan Gardee told House public safety committee. “Furthermore, the NCCM is not going to submit to a litmus test of loyalty used against Canadian Muslims and their institutions which underlie such offensive questions.”

“We are here today to answer questions about Bill C-51 and the real concerns of Canadians, including Canadian Muslims, about the impact of this far-reaching legislation.“