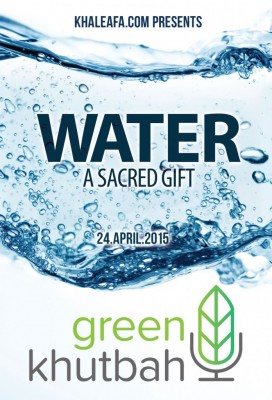 “The theme of this year’s Green Khutbah Campaign is ‘Water – A Sacred Gift’”, Muaz Nasir, the publisher of the Canadian environmental website, Khaleafa.com and one of the founders of the campaign, told OnIslam.net.

“God states in the Qur’an, ‘We made from water every living thing (21:30),’ and, we hope this year, to raise awareness on the immense gift of water that we’re blessed with.”

“The Campaign challenge is to request all Muslims to commit to protect, care for and wisely use our water resources with the 3 C action plan: ‘Consume wisely, Conserve responsibly and Care for our waters.’”

According to the United Nations, about 750 million people lack access to safe water; one child dies every minute from a water-related disease and 1.2 billion people, a fifth of the global population, live in areas where water is scarce.

The Green Khutbah Campaign was launched in 2012 in Canada and, every year, Imams across the world are encouraged to deliver a message that remind their congregations of the Qur’anic message to be stewards of the earth and its environment.

Muaz Nasir stressed that Muslims cannot tune out from the environmental damage.

“Those who violate or abuse the Trust are described in the Qur’an as those who corrupt, degrade and bring ruin on earth,” Nasir added.

“The corrupters abuse the Trust and are in clear contrast to what Muslims must be – the stewards of the earth.”

An extensive online resource has been created by Khaleafa.com (www.Khaleafa.com/greenkhutbah) to support the Green Khutbah Campaign together with Islamic organizations and well-known leaders lending their support to the initiative.

Climate change is the only exception, where concern was lower from 1998 to 2003 than it is now.

Further commenting on its poll, GlobeScan Chairman Doug Miller commented that scientific reports support the fact that “environmental damage is stronger than ever—but our data shows that economic crisis and a lack of political leadership mean that the public are starting to tune out.

Miller also suggested that, “those who care about mobilizing public opinion on the environment need to find new messages in order to reinvigorate a stalled debate.”