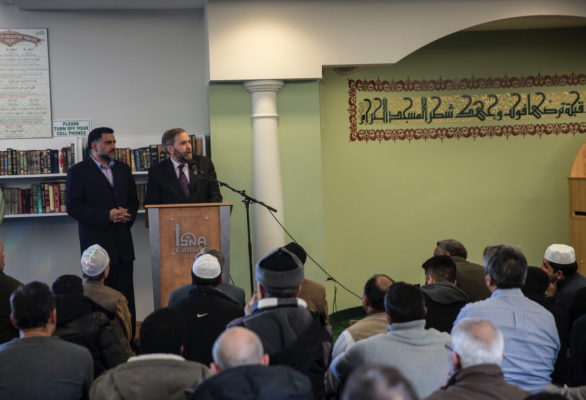 “Friends, I’m here with you today because New Democrats understand that Islam is not our enemy,” Mulcair told the Friday congregation. “Muslim Canadians contribute so much to this country, hopefully one day we will see that on the evening news, insha’allah.”

“Muslim-Canadians make remarkable contributions to this country… you deserve to live and raise your children without fear and suspicion,” continued the NDP leader. “I’m proud of the close bond that New Democrats have with Muslim-Canadian communities right across the country.”

“And I’m committed to continuing our work together, building prosperity for the middle class, opportunities for your children and unity for all Canadians,” he added. “By working together, we can build a better Canada … and a more peaceful and respectful world.”

The NDP leader was speaking at the ISNA Mosque located in Mississauga following the weekly Friday congregational prayers. Fayaz Karim, the NDP’s candidate for Mississauga-Streetsville, accompanied him.

The leader of the official opposition criticized Prime Minister Stephen Harper of using Muslims as ‘ the scapegoat for his political debates’ and for fueling Islamophobia.

“On the night of the Parliament Hill shooting, I spoke to the nation and said that violence should never make us more fearful of our neighbours or less confident in ourselves,” Mulcair told the congregation. “Unfortunately, the Prime Minister has chosen a very different approach – he’s chosen to divide, to drive fear and to weaken the very freedoms we’re supposed to protect.”

“He’s chosen to make Muslims — your family and friends — the scapegoat of his political debates,” he said. “Why else would he openly suggest that Islamicism is Canada’s biggest threat, or that Canadian mosques are home to radicalization?”

“The Prime Minister’s comments are offensive, they fuel Islamophobia… and he should apologize.”

Thomas Mulcair further called on the government to work with communities to fight radicalization.

The NDP leader was particularly forceful in his remarks about Bill C-51, the Conservative government’s Anti-Terrorism Act.

“Mr. Harper’s Conservatives have introduced a bill that is sweeping, dangerously vague, and likely ineffective,” said Mulcair. “Mr. Harper’s bill could target any Canadian who disagrees with his government, regardless of whether or not they are a real threat.”

“Despite the deep concerns of a growing list of experts— including four former Prime Ministers — the government is rushing this bill through Parliament without any meaningful consultation or oversight,” he added.

“That’s why New Democrats are calling on the Conservative government not to rush its anti-terrorism legislation through Parliament, and to listen to the concerns of experts—and ordinary Canadians,” urged Mulcair. “And that’s why we’re calling on the Liberal Party to reverse its support for this dangerous bill, and to work with the Official Opposition to protect the fundamental freedoms of all Canadians.”