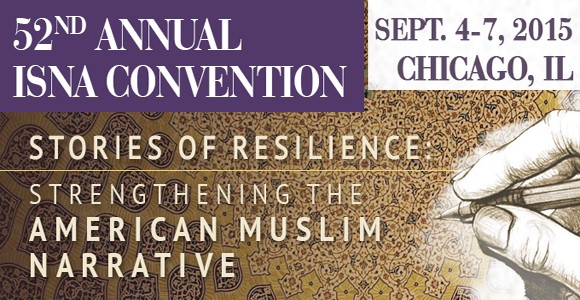 (September 3, 2015) – Thousands of Muslims from across the US will gather in Chicago this weekend to attend the Islamic Society of North America (ISNA) 52nd Annual Convention, a four-day event at which they will discuss ways of strengthening the Muslim presence in America.

“This year’s theme is ‘Stories of Resilience: Strengthening the American Muslim Narrative’ and will showcase stories of unsung heroes in our community as well as success stories of families, masjids and community initiatives,” said ISNA in a statement.

Kicking off on Friday at Chicago’s Donald E. Stephens Convention Center, the convention is one of the biggest Islamic gatherings in North America.

Government and interfaith leaders, as well as heads of organizations will address the convention’s inaugural session on Friday.

A highlight on the opening day will be the launch of a campaign calling for inclusive, women-friendly mosques across North America.

“The campaign’s goal is to realize the Prophetic model and calls upon all masajid to ensure women are welcomed as an integral part of the masjid and encouraged to attend,” reads the statement prepared by ISNA’s Task Force for Women-Friendly Masjids.

The campaign will also call for “Women to have a prayer space in the main musalla (prayer hall) which is behind the lines of men but not behind a full barrier that disconnects women from the main musalla and prevents them from seeing the imam.”

The statement recommends women to, “actively participate in the decision-making process of the masjid, best realized by having women on the governing bodies of masajid.”

The convention is packed with plenary sessions to be addressed by prominent Muslim speakers and includes workshops on a variety of topics.

An Islamic Film Festival, an Art and Photography Exhibit, a National Qira’at Competition, a Matrimonial Banquet, a women’s Fashion Show, Meet the Author sessions and Health Fair will be held. There will also be a bazaar and trade show with 500 vendors.

A new initiative added at this year’s convention is the introduction of community roundtable discussions.

“There will be 6 different Roundtable Discussions ranging in topics which are relevant to the Muslim community,” noted the convention organizers.

“Each session will be moderated by a professional facilitator, including experts and local authorities.”

The convention will be providing attendees an opportunity to volunteer to package meals for needy people around the world.

In partnership with Stop Hunger Now charity, attendees will be packaging 40,000 meals.

Since Stop the Hunger was started in 1998, the charity has provided over 180 million meals in 65 countries. This year, volunteers will package 45 million meals, and ship over $9 million in donated aid, mainly vitamins and medical supplies.