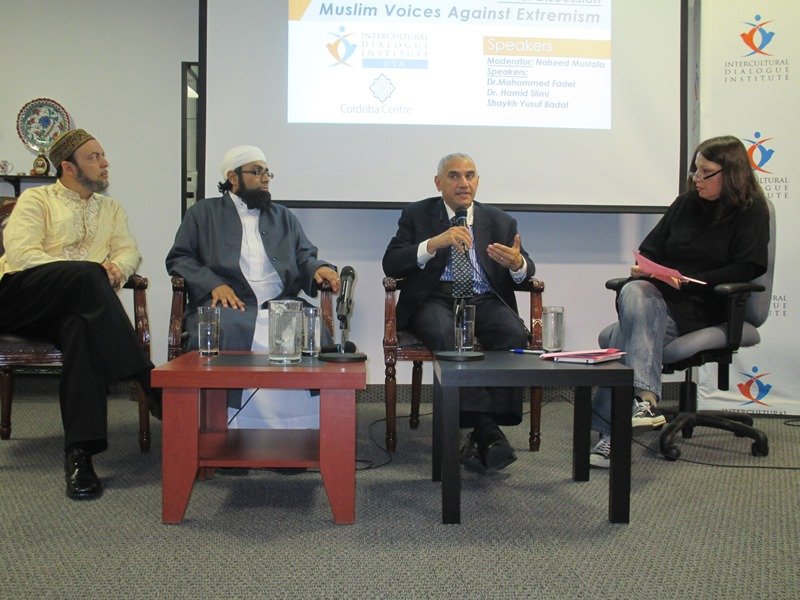 It would like to call itself the Islamic State but its detractors would rather not give it that legitimacy by referring to it either as a Islamic or as a state, hence DAESH.

Regardless of which name is most appropriate, it inevitably brings up a conversation of violent extremism in the Middle East.

With this in mind, the Intercultural Dialogue Institute hosted a conversation in collaboration with Cordoba Centre for Civic Engagement & Leadership with the theme “Muslim Voices against Extremism” on October 22nd, 2015.

Naheed Mustafa, award winning freelance broadcaster and writer, was the moderator for the evening. The speakers were Mohammad Fadel, Associate Professor and Toronto Research Chair for the Law and Economics of Islamic Law at the University of Toronto’s Faculty of Law; Imam Hamid Slimi, Founder and former Chairman of the Canadian Council of Imams; and Shaykh Yusuf Badat, Imam and Director of Religious Affairs at the Islamic Foundation of Toronto.

A subject so large and complex could certainly not fit into an hour and a half, but there were interesting insights raised nonetheless.

There was a strong emphasis on the use of religious texts out of context; DAESH employs violence with the use of Islamic texts as misplaced justification.

Shaykh Badat explained that without proper sources and experts to explain those sources, there were many supporters of DAESH who had access to religious texts, without context and without proper guidance of a religious tradition that is varied and complex. DAESH does not have experts on the Qu’ran and many other prophetic writings.

Professor Fadel, though, stressed that much of the social glue and societal structure of Iraq collapsed along with the Ba’athist regime. While proper education of those who live in Western nations may help, with its own share of difficulties discussed later, the reality that people face in Iraq and Syria is very different. While it may be a political problem that manifests religiously, he explained that in the Middle East, there is a need to better governance when it came to the structures of states in those regions, describing radicalization as a kind of social problem.

During the question and answer period, there were a myriad of points to discuss. Shaykh Badat explained that giving people the tools to distinguish between right and wrong information would help when it came to those who were targeted in western nations. Shaykh Badat, who consults with the RCMP, explained that while the RCMP has said it is impossible to stop the flow of DAESH propaganda over the internet (as we all well know the nebulous nature of the internet), legitimate organizations like the Council of Imams would help give a better, clearer and authentic understanding of the source texts and where marginalized people could turn. 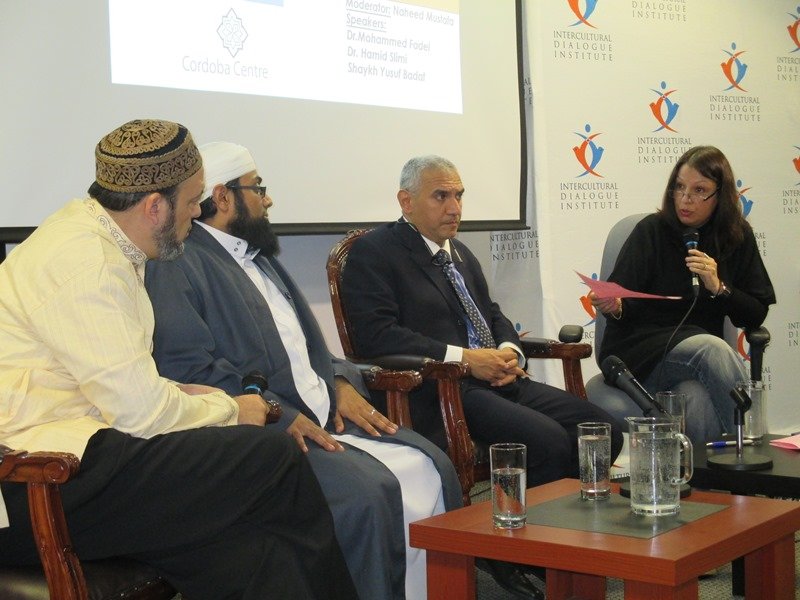 Following from this, Imam Slimi explained that there exists a fundamental misconception of ‘Islam’ as a highly organized religion in western societies. He explained that there are five hundred and fifty thousand Muslims in the Greater Toronto Area alone, with only about twenty-eight to thirty Imams, giving them each about thirty thousand followers. On top of this, he explained that not only are Sunni Imams not ordained with specific training, but there is also an expectation that on top of their jobs they also need to be aware of things like mental health issues, media training, and all the other things that come with being the faith leader of thirty thousand people.

With the insights from the three speakers, who are well-known for their work and community engagement, a clear picture emerges that directly contradicts what one can hear blasted around news and social media. Muslim communities do take action to fight against extremism and continually work towards a more harmonious and integrated society.

Frequently, it seems that those who are not welcomed into the society in which they live are the ones who are most susceptible in falling to the words of the violent views of DAESH. There is a need to welcome these people in society, to enfold them, so that they do not seek other forms of expression.

To truly represent the Canadian values of a welcoming community would mean aiding Imams who are overtaxed, adding the extra step to protect its own citizens. When a Canadian gives credence to the violent ways of DAESH, it is not a failure of Islam or religion, but of Canadian society for one of its own.