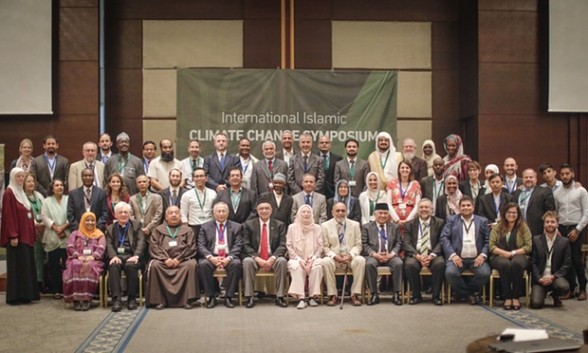 The Declaration calls on the rich countries, to recognize their “moral obligation to reduce consumption so that the poor may benefit from what is left of the Earth’s non-renewable resources,” BBC reported on Wednesday, August 19.

The Islamic Climate Declaration says that the world’s 1.6bn Muslims have a religious duty to fight climate change.

It urges politicians to agree a new treaty to limit global warming to 2C, “or preferably 1.5 degrees.”

The Declaration asks Muslims, in the words of the Koran, “not to strut arrogantly on the Earth”.

It was drafted in Istanbul at an international symposium, urging “all people, leaders and businesses …to commit to 100% renewable energy.”

It also argues for increased financial support for communities vulnerable to climate change.

The main focus though is on “well-off nations and oil-producing states,” who are urged to lead the way in phasing out greenhouse gases, no later than the middle of this century.

“People need to be told and politicians need to stop misleading their people, in telling them they can go on increasing their standards of living for ever and ever and ever,” Fazlun Khalid, a long time Islamic environmentalist involved in drawing up the Declaration, told BBC News.

“Someone should be articulating this because it’s an impossibility, they can’t do it – And this applies not just to Muslim countries.”

The call has been supported by religious leaders including the Grand Muftis of Uganda and Lebanon, the president of Indonesia’s major body of religious scholars as well as environmental groups and government officials from Morocco and Turkey.

While some argued that the Declaration is not truly representative of Islam, with some of the biggest Islamic nations not taking an active part in supporting the call, others praised it.

“Are all Islamic countries represented? I’d say no to that – that’s the honest answer,” said Fazlun Khalid.

“There is a huge amount of lethargy – we are not set up like other churches, there is no Islamic pope!

“The Declaration is like a trigger – to say, wake up wherever you are, wake up and take care of the Earth.”

Catholic leaders have praised the Islamic Declaration as a positive step.

“It is with great joy and in a spirit of solidarity that I express to you the promise of the Catholic Church to pray for the success of your initiative and her desire to work with you in the future to care for our common home and thus to glorify the God who created us,” said Cardinal Peter Turkson, who helped the Pope draft his encyclical.

The authors of the Declaration say that it will be available in mosques and madrassas around the world.

They hope that it will influence political leaders in Muslim countries to become more fully involved in global attempts to deliver a new treaty on climate change, expected to be signed in Paris in December.

While around 50 countries have so far posted their plans for curbing climate change ahead of the meeting in Paris, very few Muslim countries have been among them.