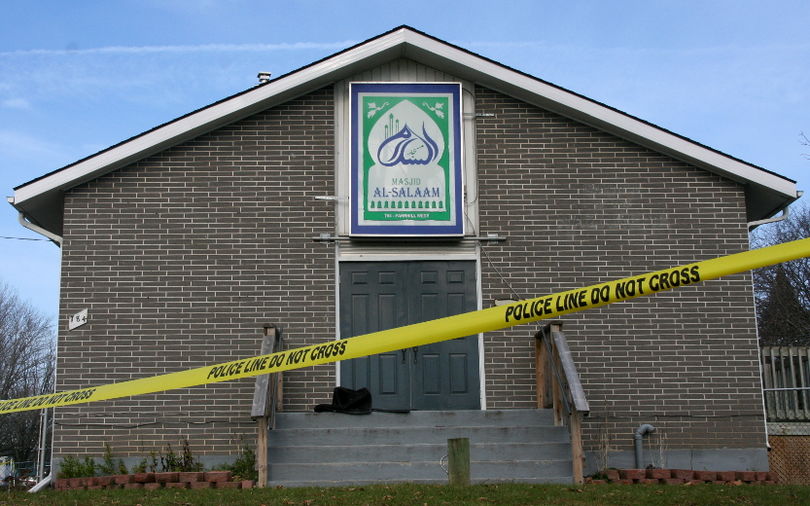 (November 15, 2015) – Peterborough police are investigating a fire at the town’s mosque, Masjid Al-Salaam Mosque on Parkhill Road, which they say a fire was deliberately around 11 p.m. Saturday night.

Firefighters responded and contained the fire to the main floor, but there was heavy smoke damage to the building. No one was inside the mosque at the time.

“It looks like a hate crime,” said Zahid Sultan, vice-president of the local Muslim association. Peterborough police have “told us they are taking this as a hate crime and they have taken evidence into their custody,” he said.

The suspicion is that vandals lashed out at local Muslims following Friday’s deadly attacks in Paris.

The National Council of Canadian Muslims (NCCM) has denounced the arson of the mosque.

“This attack is very disturbing.  The mosque is regularly attended by families with young children. We are relieved no one was injured as this incident could have been much worse,” said NCCM Executive Director Ihsaan Gardee.

“While deeply hurtful and offensive, Canadian Muslims know that such acts do not represent the views of the vast majority of their fellow Canadians or of the residents of Peterborough. We call on authorities to investigate this arson as a hate crime so a clear message is sent that these acts have no place in our communities.

Maryam Monsef, the newly elected MP for Peterborough-Kawartha and Canada’s minister for democratic institutions, wrote in a news release that she is “deeply concerned” about the fire.

“My thoughts are with the families who visit the mosque for prayer every week, and I hope that the facility will be open for prayer again soon.”

She stressed that Peterborough “is a warm and generous community.”

“We have a proud history as a welcoming and friendly place to live, just as it was when my family arrived here 20 years ago,” Monsef said, referring to her arrival

Meanwhile, St. John’s Anglican Church is collecting funds to help the mosque back on its feet as soon as possible.

“In terms of the faith communities and the community of Peterborough, we have to support the Muslim community and be an inclusive community,” said Bonnie Williams, St. John’s warden.

A Facebook group has been set up in support of the mosque.