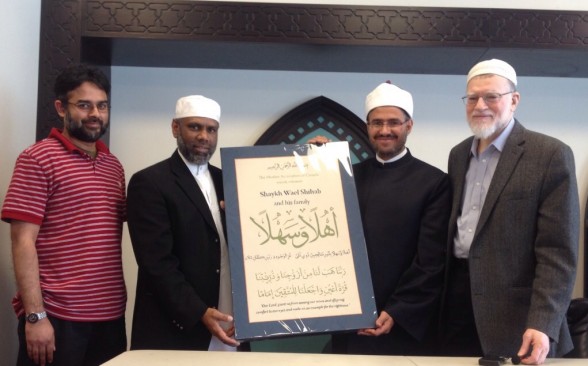 (April 19, 2015) – Masjid Toronto welcomed its new Imam and resident scholar, Dr. Wael Shehab at a reception held on Saturday at the mosque in downtown Toronto.

Dr. Wael Shehab holds a PhD in Islamic Studies from Al-Azhar University and was the Head of the Shari`ah and Fatwa sections at the English website, OnIslam.net.

Dr. Shehab is also a member of the International Union for Muslim Scholars (IUMS).

“Today is momentous day for us at Masjid Toronto as we now have a fulltime, resident Imam – not just an Imam but someone who has the qualifications, who has the knowledge to lead this community, Inshaa’ Allah,” said Shaikh Abdool Hamid, a Khateeb at the mosque, in his welcoming remarks. “On behalf of myself and Masjid Toronto and the congregation, I take this opportunity to extend a very warm welcome to Dr. Wael Shehab.”

Its unique location near Ryerson University and the University of Toronto, as well as its proximity to downtown businesses, hospitals, city and provincial governments, and the bus terminal, make it a sanctuary for Muslim professionals, students and travelers alike. 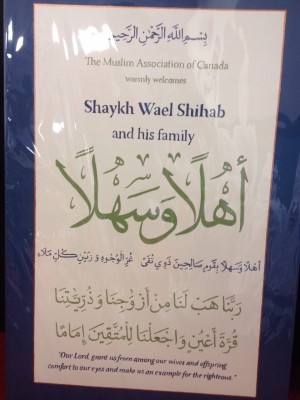 Its other satellite mosque, Masjid Toronto at Adelaide located at the intersection of Church and Adelaide Streets, serves the financial district of Toronto.

“The Imam of this Masjid has to be someone special because Masjid Toronto is in the downtown core and there are hundreds of professionals, highly educated individuals, who attend the congregation regularly,” added Shaikh Abdool Hamid. “So the Imam has to be someone who is capable of engaging this congregation at a level of linguistic eloquence and with an in-depth knowledge of the Qur’an and Sunnah and their relevancy to our context.”

“We ask Allah to cause our community to benefit from your knowledge, your guidance, your wisdom, your expertise and I pray that your presence here, Dr. Shehab, will be uplifting for the presence of Muslims and the Muslim identity in this city and country.”

Each week, thousands of people visit both locations of Masjid Toronto to perform the five daily prayers and to attend one of the six congregational Friday prayers.

“I am grateful to Allah Almighty who blessed me and my family to be here with you,” said Dr. Wael Shehab. “We thank God for His mercy and His blessings for me and my family.”

“We are very grateful to you all who helped us so much during the last week,” added Dr. Shehab. “We have found true brothers and sisters who will replace our families back in Egypt.”

“We have felt the true brotherhood and sisterhood in the community, by the Grace of God.” 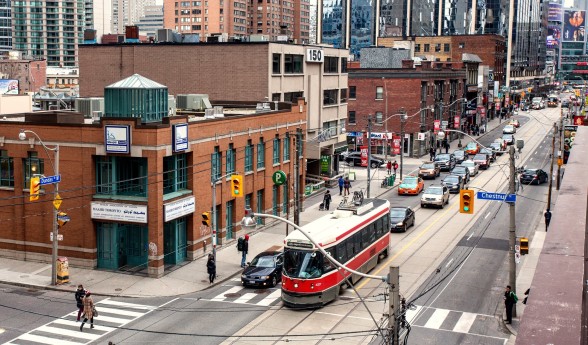 The history of Masjid Toronto dates back to the early 1980s when Muslims working in the downtown core of the city performed Friday congregational prayers with students at Ryerson University.

As the size of the Friday congregation grew, the university restricted the prayer service to students due to space constraints.

The non-student congregation went on to rent facilities along University Avenue as well as Bay Street to hold the Friday prayer service.

In the 1990s, the population of Muslims increased rapidly and the congregation saw the need to establish a mosque in the city centre, close to the seats of government and the business and hospital districts.

In 2002, a former bank building was purchased by the Muslim Association of Canada (MAC) and renovated to become Masjid Toronto.

Another facility was purchased a few years ago and a satellite mosque, Masjid Toronto at Adelaide, was opened. As more Muslims continue to move into the city centre to live and work, MAC is looking at establish other facilities.

There are over 1 million Canadian Muslims making up 3.2 per cent of the total Canadian population and they rank fifth among faith communities and denominations. A Washington-based Pew Forum report on Religion & Public Life said that Muslims are expected to make up 6.6% of Canada’s total population in 2030.

According to a recently released report by the Canadian Dawn Foundation, Muslims are an urban community, with two-thirds living in just two cities, Toronto and Montreal. Only ten cities have more than 15,000 Muslims.